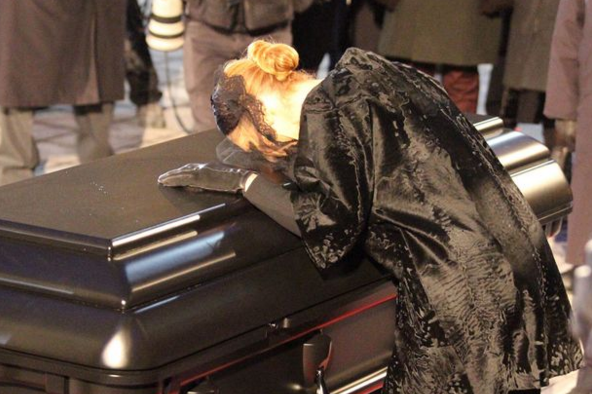 The death of love between two people can occur in an instant. But the love doesn’t fully dissipate until the other person dies. That’s what Justine kept thinking as she saw images of Céline Dion at René Angélil’s funeral. This was the day after she had seen the display for herself on January 22nd.

She appeared sad in a way that came across as faintly obligatory. That’s all Justine could think when she passed by the Notre-Dame Basilica in Montréal. Incidentally, this had also been the place where Céline and René were married in 1994, a rare Canadian spectacle that served as the nation’s version of the Prince Charles and Princess Diana wedding.

Catching a glimpse of Céline in her all-black couture and sheer veil, she knew somewhere behind the stone-faced air she had put on for the press, she was mourning just as much as Justine was. But in Céline’s case, her love was a bit more reciprocated than Justine’s. That, and Justine had been going out with someone age-appropriate. In fact, it was all Justine could do to keep from shuddering at the thought of how René first met Céline when she was just twelve years old, then married her at eighteen, as though he was lying in wait like a sexually-charged panther for six years in between.

It was strange to return to Montréal from Toronto just as this tragedy had befallen the city, and yet, somehow fitting considering the emotional wreckage Justine had been wading through of late. She stayed among the crowd just long enough to see a moment of true grief on Céline’s face. She recognized the look so well, for it had been the one she was wearing herself since December, after her boyfriend of four years suddenly decided to up and leave for France again–regardless of whether she was interested in going or not. Marc was from Toulouse and had come to Toronto to study, with the hope of later parlaying his way into the United States, the proverbial promised land. Promises of what, Justine wasn’t exactly sure.

Their first encounter had been at the coffee shop she worked at, RSquared Cafe. Marc came in with a stern expression that made Justine dread what he might order. She imagined it to be something unnecessarily complex, like a no-foam latte or an iced, sugar-free something or other. But when he approached the counter, all he said was, “Small black coffee, please.”

Something in the deadness of his eyes made her want to reach him in a way she knew she would never be able to. What was it about apathy that made someone so attractive? He sat in the back corner and didn’t look up from his pile of books or computer screen once while she was working. Thus, it was surprising to her when, as she was removing her apron to get ready to conclude her shift, he materialized before her to ask, “What are you doing now?”

She shyly replied, “Going to my next job.”

Justine evaded the question conveniently when her manager, Riordan, an overzealous red-head from Ireland, came up to inform her, “Can you clean up the bathroom before you head out?”

Justine was relieved, in a way, to be shamed as such. She assumed it would keep Marc from any further attempts at making none-too-subtle entreaties to go somewhere with him. And so, after scrubbing the filth of someone else’s secretions in the bathroom, Justine headed to the Done Right Inn, where she also tended bar to subsidize living in West Queen West. The clientele wasn’t exactly always generous with the tips, particularly certain junkies that only paid in change, but it was enough with her second job at RSquared.

Putting on a song that would signal her reign as the bartender for the next few hours, Justine chose The Buzzcocks’ “Ever Fallen In Love (With Someone You Shouldn’t),” which would later prove eerily fortuitous for, at that moment, Marc walked in. He seemed as shocked as Justine was to re-encounter one another, but he hid it as soon as he sat down at the bar and ordered a beer.

“Just the two,” she said as she pushed the glass toward him.

“Does that mean you don’t have time for fun?”

But by the end of the night, she did, indeed, allow herself to have some “fun” by going back to Marc’s apartment on College Street. It was furnished in the sort of manner one expects of someone who has no desire for permanence: bare walls, sparse furniture that was of the Ikea variety. The only decoration of note was, bizarrely, a poster of Céline Dion from her Vegas show.

Drunk enough to be candid, Justine queried, “Are you straight?”

For the first time since she had known him, Marc cracked a smile. “Yes. It’s a sentimental thing I brought. My mom took me to the show years ago and, I don’t know. She’s not around anymore…so it’s just a way for me to keep a good memory alive.”

Justine hiccuped. “Oh. I’m sorry.” It was at this point that Justine collapsed, only to awaken at noon the next morning to find a note from Marc that read: “Stay as long as you like. Went to university.”

Ashamed of her behavior, Justine went to the bathroom to use some toothpaste via the “finger method” and then dashed out the door to head back to her side of town. She had to be at RSquared by one and didn’t bother going home to freshen up. As she arrived at the cafe, it was immediately clear to Riordan that Justine was hungover.

Accordingly, she took Justine aside to chide, “Do you need to go home? I knew you taking on another job was a bad idea.”

“You look like someone fished you out of a gutter. Go home.”

Justine was being summarily dismissed. And that’s how Marc cost Justine the first time. Though it wouldn’t be the last by any means. Only she wished that during future instances, he had cost her more money rather than more emotional trauma.

In the beginning, Marc was a different, kinder person. So upset was he, in fact, that she had lost her job because of him that he suggested she sublet her apartment and move in with him to make up for the sudden financial lack. It was ill-advised, of course, but she did it. And soon, they were living in a domestic reverie. It was one that had its ups and downs, though, increasingly, the downs were more pronounced. Maybe that’s why Marc decided to up and leave without warning or concern. His lease had ended and no prospects worth staying for (least of all, apparently, Justine) had come to fruition. He was done with school and free to be free.

He told Justine of his departure the day of. She came home around 3:00 a.m. from the Done Right, thirty minutes before he was expecting his cab to take him to the airport. Maybe he wanted to get there for his 5 a.m. flight especially early to avoid what he presumed would be Justine’s inevitable hysteria. Thirty minutes isn’t a very long time to hash out all that might have gone wrong in four years, least of all how to remedy it. Justine was made a pathetic fool by crying for him to stay. She would have done better to remain unmoved by it. Because you can’t implore or affect someone who so easily makes life-changing decisions without considering another.

Without realizing it, Justine was shedding tears amid the Céline fans and supporters. Thrust back into the present, it was as though she shared something not just with the crowd, but with Céline, who was forced to put her love in a coffin and watch it get buried so that it could never bubble up again.