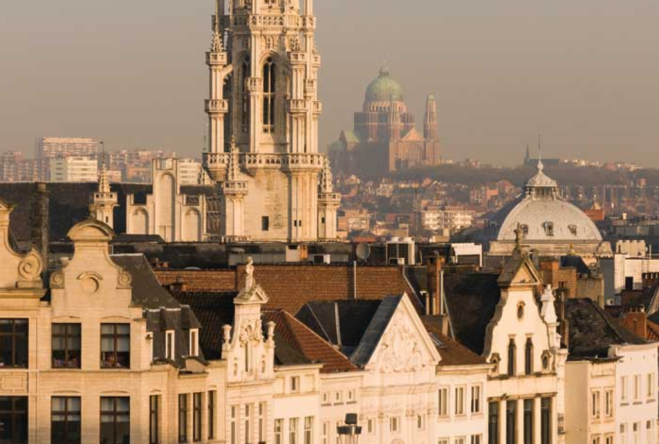 “Too much is not enough,” reads the back of a homeless man’s sweatshirt lying on the ground as I pass by wearing oversized sunglasses that could even put the Olsens in their bag lady chic period to shame. I feel like I’m careening on the cobblestones, losing my footing in a way that would infer I’ve had more Belgian beer to drink than I really have. Yet I limited myself to two glasses because that’s what a lady is supposed to do when she’s a lone traveler of propriety.

In the Carrefour Express, an old song–2013 old–plays. “When I Grow Up” by The Pussycat Dolls. The song is already ominous in and of itself, but taken out of the context of 2013 and placed in the vacant aisles of the store, it is even more so. A pack of youths, the scary kind that you might see cackling in the Tube at night in London, come barreling upstairs where I can’t seem to find the toothpaste amid the cans of tuna and packs of Hoegaarden. One of them, a girl with long beaded braids, tries to stare at me but can’t because of my sunglasses. I’m wearing all black in seventy-degree weather and it feels as though people are regarding me as they would Nancy in The Craft. Or maybe I’m just being my usual overly insecure, self-involved self. No one is looking at me, it’s all in my head. So why does the girl with the braids seem to be serenading me as she sings along with the lyrics, “Be careful what you wish for ’cause you just might get, j-j-j-ust might get it, ungh!” I look at her through my burka-like eyewear and try to understand what makes young people so fucking self-righteous, as if they’ve ever done anything with their lives other than not have wrinkles. I’m in awe that she is able to sing along with this song. Was she even out of the womb when it came out? Ah, there it fucking is: the toothpaste. I snatch it from the shelf and make a beeline toward the stairs. I get the sense that people rarely come to the top floor of this Carrefour. It’s like the people who go all the way to the top of the Duane Reade in Times Square for something they have no true need of. Like batteries. Unless your masturbation needs are that urgent, which can happen sometimes when you’re on the move.

The song continues to play, along with the braided girl’s vocals  and their ceaseless repetition of the chorus. I feel like Victor in Glamorama when he randomly hears someone nearby whistling “The Sunny Side of the Street” (it’s written this way instead of its true title, “On the Sunny Side of the Street,” because that’s what Bret Easton Ellis does: subtly subverts). It has the same effect on me. Like I’m being followed and that the presence of “When I Grow Up” is foreshadowing something too dreadful to even fathom. Even though I’m eager to get out of the store, my hunger forces me to remain. I don’t feel like eating Belgian waffles or Belgian fries as I’m not in the mood to grow a fourth and fifth ass cheek. What’s more, I haven’t ingratiated myself yet enough into the city to have the confidence to dine alone. One must work up to that, psychologically. Yet every time I go through a different aisle, I somehow see the same worker, and I’m somehow always in his way, mumbling a sorry that neither comes across as French nor English. I grab a Hoegaarden thinking it’s a beer, but apparently they make flavored white beer sparkling water as well. Which is precisely why I definitely shouldn’t be careening through the streets. Should feel as though I have my wits more about me. I do not.

The homeless man is what sends me over the edge. Is he wearing this sweatshirt intentionally, as a performance piece or to mock all those affluent types that pass him without giving him so much as a centime? How can this be real? Someone is putting me on. Someone is always putting me on. And I don’t know why. I’m not significant by any means in the universe–have no family, no significant other, no friends. Why does the universe see fit to bother with toying with me in this way? Baiting my paranoia at every turn. Or is it precisely because it’s so much easier to trifle with someone that no other human will notice as the remaining loose threads of her fraught mind start to unravel completely that the universe targets me?

“Victim!” I hear someone scream behind me. When I turn around, it is a little boy and his father, though the voice I heard was a woman’s. Be careful what you wish for ’cause you just might get it. All this time, maybe I had been wishing for madness. So that it could just end my aimless wandering. Tous ceux qui errent ne sont pas perdus, an overly beloved quote in a bookshop reads. Yet I find myself very perdue in these streets among these people, all with their purpose. Part of some sort of “unit”–whether a family or a couple. Here I had been banking on the automaton existence of the twenty-first century, an era where affections and attachments were supposed to be obsolete, even deemed a human foible. But it seemed that I was the one with the foible: misanthropy.

I rounded a corner at random when I heard the same woman insist, “Victim!” Or maybe it was my own inner Jesus Prayer. Walking faster toward the Vergote Dock, possibly hoping to pick up a dock worker, the insistence grows louder, “Victim! Victim! Victim!”

It’s a high-pitched whisper that I can’t shake from my eardrums. And as I now practically sprint toward the water, I trip over a cobblestone that’s more raised than the others and land face first onto the Belgian block. The chant/accusation stops now, and I can feel myself being turned over by the girl with the braids from the Carrefour. “Ha ha ha ha ha!” she says, imitating The Pussycat Dolls. I’m sure Victor still had it worse than me though, what with all the Semtex explosions and endless wafts of a shit odor.