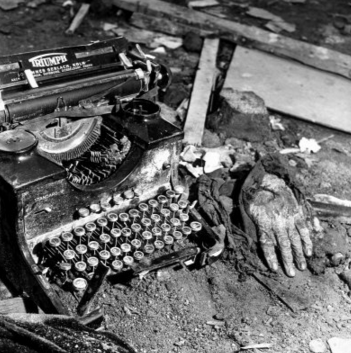 When you “claim” to be a writer to people, they have this tendency to look you up and down with the same disdain and incredulity one might also harbor for a homeless person. “Oh? What do you write?” “Um, mostly a lot of false starts and first sentences,” I want to say. But instead, I downplay it as much as possible. “I don’t know. I, uh…” a five minute pause will ensue, and then the person will comment, “Wow, for a writer, you sure aren’t very eloquent.”

This pressure to be a certain way, to possess a certain endless reserve of writerly capacity to describe and specify, report and delineate is an exhausting archetype to be upheld to. It’s rather impossible as a “normal” person, which is, in fact, what most writers are nowadays. People moonlighting, dabbling in the art as they try any means necessary to convince themselves that they aren’t ordinary. That they’re more than the day job that plagues them. Anyone can be a writer, mainly because it’s the least expensive art to pursue. All you need is an ego and a computer–shit, even a pen and some paper if you want to be really pretentious about it. At least, it is often said that anyone can be a writer. But the difference between being and doing is leagues apart.

But I, I still have so many issues with this classification of being a writer, as opposed to doing the things a writer should in order to be deemed as such. Why, just the other night some drag queen named Krista Kunto seethed, “You write two hundred words a day on a blog and call yourself a ‘writer.'” I write well more than that, but apparently, being seen as a “blogger” remains far more déclassé than even being a failed writer. How is one supposed to be taken seriously, as it were, if you’re seen as pompous for pursuing your, ugh, art, in a Hemingway typewriter fashion and gauche if you do it in the Tumblr girl manner that might have really behooved Zelda Fitzgerald in her day as an outlet for expression?

In general, it seems as though writers are the bastard children of the arts, even more so than performance artists and poets. No matter what we do, we’re vilified, criticized and spurned–usually for feeling ourselves “above” a common existence: the nine to five, the worries about taxes and biological clocks, etc. As Bukowski said, “An intellectual says a simple thing in a hard way. An artist says a hard thing in a simple way.” This is also a primary reason for why writers of an artistic and non-blowhard (sometimes mistakenly called “intellectual”) persuasion are crucified: they speak the truth, often one not wanted or ready to be absorbed.

Sometimes, if you say what’s real, however, the inevitable ostracism follows. Basing characters on people you know à la Catherine Tramell is, of course, the number one offense a writer can make, frequently leading to dismantled or strained friendships and relationships as a result of your callousness in being brutally honest about someone you know’s foible-laden personality.

Indeed, to upset a writer can be worse than upsetting God if you offend the wrong one, the kind with the power to mass produce the depiction of how he felt flouted, similar to the way Woody Allen lambasted Philip Roth in Deconstructing Harry (though, unfortunately, this proves a win for the occasional power of the screenwriter rather than the author). Your entire reputation–your life, in essence–can be destroyed with a few deprecating paragraphs from the writer. And yet, somehow, we’re all still treated like delusional pieces of garbage, muttering to ourselves about how great we are and how valuable our profession is, when in reality, according to everyone else, it is something a monkey could do.

I find it ironic that there was a typewriter brand called Triumph. Because there is nothing triumphant in being a writer. It’s all loneliness, isolation, misunderstanding. Especially when you’re going about it all wrong. Interaction, relationships are key to being a good writer, it’s just a matter of accomplishing that rare feat of finding those willing to put up with your moodiness and megalomania. But again, to quote Bukowski, “Everybody hates us and we don’t care.” In fact, some of the best writers get more sexual pleasure from being loathed by “the public” than actual orgasm. In which case, I should be feeling constant gratification rather than the dull stasis of pain that makes up my day to day. If this is truly what it is to be a writer, then no, not anyone can do it. The real chastisement should be, “For a writer, you sure aren’t as masochistic as I would expect.”