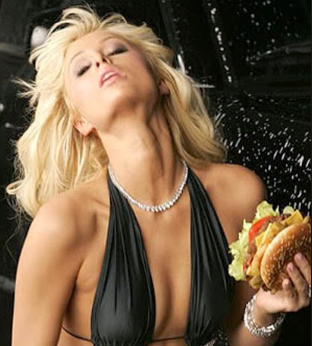 Even a socialite gets prone to base desires. Base desires that consist of an unbridled need for In-n-Out. At the outset of that evening in 2006, however, Paris was not in such a gauche frame of mind. She had grand plans to return to her N. Kings Road mansion for a healthy midnight snack prepared freshly for her by her live-in chef, Matsuki, who often just gave her a sushi-flavored food pellet. She was even thinking about inviting Lindsay, too–even though things between them had started to feel more than just vaguely strained since that TMZ video.

After all, Paris’ go-to arm candy, Brandon Davis (an oil heir, naturally–with oily hair, to boot), drunkenly slurred of Lohan’s vagina, “It shits out freckles, it’s orange and it smells like diarrhea.” But he wasn’t quite done there, adding, “I mean, who would want to fuck her? Who? …she’s got a fire crotch.” Paris, who always employs jesters to make her laugh, was endlessly tickled by Brandon’s candor with regard to what would become her longtime frenemy/nemesis. What truly cinched the deal for keeping Brandon around far longer than his expiration date was his coup de grâce comment, “I think [Lindsay’s] worth about seven million–which means she’s really poor. It’s disgusting. She lives in a motel in New York.”

As Paris stepped on the gas with Brandon in the passenger seat and that final thought memorexed on camera, it seemed almost prophetic that the heiresses’ current driving style and karma for trash-talking would lead to the DUI heard ’round the world. Months later, in September–the 7th, to be precise–Paris’ driving ineptitude while tipsy would be deemed inadequate by the LAPD, all too elated to arrest the enfant terrible of Hollywood on “suspicion” of drunkenness, in which the saying, “Where there’s smoke, there’s fire (crotch)” proved all too accurate.

Defending her Californian right to happiness, Paris explained why she may have been “speeding a little bit” to Ryan Seacrest (remember, this is 2006, when Seacrest was a one-man gossip-addressing bible) on his talk show the following morning–proof that she’s seasoned in the art of managing the hangover–by insisting, “I was just really hungry and I wanted to have an In-n-Out burger.” Considering her lusty ad for Carl’s Jr. in 2005–banned for a level of raciness that’s lost much of its burnish–there was nothing if not a tinge of irony to the statement.

Paris’ pesky detour to the police station put a very unwanted damper on the joyful release of her single, “Stars Are Blind,” just one week prior, rivaling Britney Spears and Jessica Simpson in sound and style. Paris’ unique ability to completely ignore that someone else recorded the song for her is, in part, what lies behind the genius of her success. She believes in who she is, and who she wants to be–therefore transcends into it. Her preoccupation earlier that day with filming the beachy black and white video for the song was quickly quelled with a little post-“work” celebration with her sister, the less attractive Nicky. And, speaking of siblings, haven’t you ever noticed that it seems to be a rule that one sibling has to be less attractive than the other? It’s sort of like a law of the universe.

In any case, Paris had been anorexic since after filming the Carl’s Jr. commercial a year ago, and wasn’t interested in eating at “dinner.” The charity event that she and Nicky went to subsequently, hosted by Dave Navarro (who Paris may or may not have gone down on at some point during the shindig–it’s difficult to know for sure when someone has perma-blow job lips), was enjoyable enough for the first hour, until Paris began to notice the pangs of hunger tugging at her artificially tanned stomach.

While Paris had only just publicly declared to the Los Angeles Times last month she didn’t “like the taste” of alcohol (secretly wanting to add “just that of cum” with a wink, but knowing that the media has zero sense of humor), a margarita had managed to slip its way into her dainty manicured hand at some point in the course of the evening. It is, undeniably, this sugary drink that pushed her over the edge, prompting her to lose all self-control, grab the keys to her car and leave without bidding anything on the silent auction. Nicky followed, with C-list boyfriend Kevin Connolly in tow.

Frantically gunning the gas pedal to get to the In-n-Out on Sunset, Paris didn’t notice the police lying in wait to make an example of her brazen celebrity behavior. Prevented from filling her stomach with something more substantial than Xanax, Paris took the arrest as a sign that she was meant to continue down the path of total starvation.

But this dietary silver lining doesn’t mean she wasn’t scarred by the experience, noting, “Everything I do is blown out of proportion and it really hurts my feelings.” And when you can’t eat your feelings, it certainly makes life all the more difficult to handle.