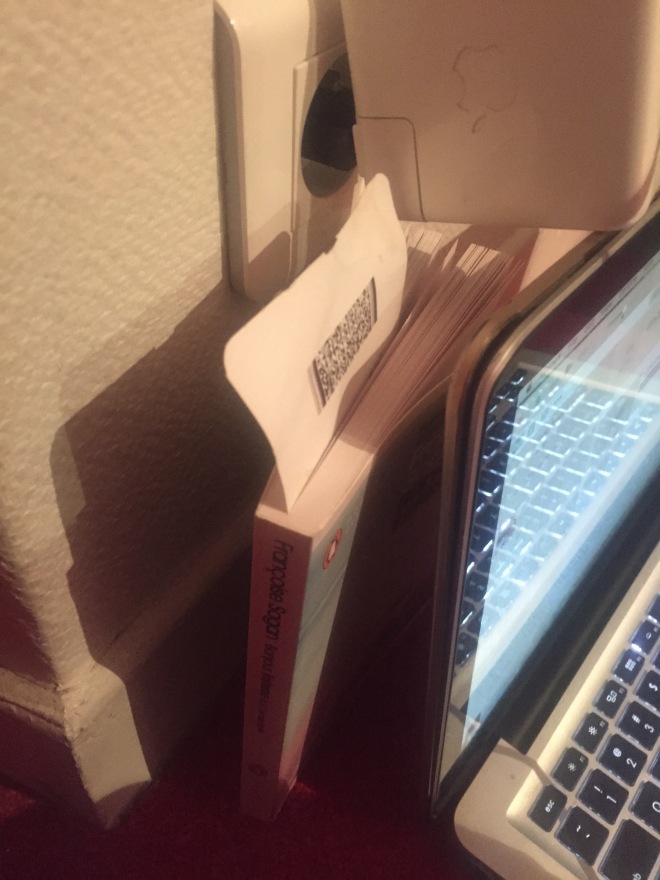 There was a time I truly believed Europe was a magical place filled with the mystique of people who knew how to live life to the fullest. Cut to me propping up my plug adapter with a copy of Bonjour Tristesse so that the charger won’t fall out as a result of being too heavy. What does this symbolize? Sheer inconvenience. It is only now that I realize why it is so much more challenging for Americans to assimilate to other countries in comparison to those who come here. The convenience of the U.S. cannot be matched. Yes, there are mass shootings essentially every day, yes, the people are dumber from an intellectual standpoint and, yes, the lack of history here tends to infuse everything with a sort of godlessness–both architecturally and in terms of aura. And yet, the sheer ratio of Europeans who move to the U.S. versus Americans who move to Europe tends to speak for itself.

Though my reason for coming to France was purely familial, I had somehow ended up staying (as all people do when they have no significant other to bind them to anything) longer than planned, waiting for the right time to buy my plane ticket, which seemed to be getting farther and farther away as the thick of summer approached and it became clear I wasn’t going to leave until October. I was then in June. It was going to be an eternal summer. And though the vibes of the country were recently rejuvenated with vigor thanks to the election of Nicolas Sarkozy in May, the surge of positivity and optimism wasn’t enough to distract me from the fact that I couldn’t seem to find a large coffee “to go” anywhere. It was all petite portions in non-portable cups that advocated you stay and relax, socialize. Where was the cafe for the curmudgeon, the man who didn’t want to engage with French people that would only insist on speaking to him in English because of how simplement terrible his own accent in French was?

But apparently I was meant to stay at Café Gênant long enough to meet Hélène Manche, an older woman who, to me, channeled Mary Steenburgen in What’s Eating Gilbert Grape? She had a similar lust as well.

Without bothering to attempt multiculturalism, I replied, “I’m visiting my aunt and uncle. They live just down the street here.”

“What are their names?”

“Um, well…” I trailed off, hearing the stock phrase ingrained within me from my homeland go off: stranger, danger, stranger, danger. Still, I could see her eyeing me with the intensity of a leopard, wanting so eagerly to know my origin story. “The LaRochettes. Do you know them?”

Other patrons at Café Gênant were starting to look over at Hélène, her gregariousness almost exceeding the limits of good taste from French to American. “You must tell them I said hello and that I insist the three of you come to dinner tomorrow.”

I gulped. The last thing I wanted my summer to devolve into was a Benjamin Braddock/Mrs. Robinson situation. And yet, it appeared as though I would have little else to entertain myself with, what with the ever-diminishing possibility of charging my computer in order to write like a normal, non-papyrus and stylus scribe of the ancient era. So I said, “Sure Ms. Manche, I’ll let them know.”

And with that, I left my already cold “coffee,” which was really just espresso, on the counter and walked out into the Jardin Public along the Garonne River. Everything about the day, the environs–it was all begging me to see reason, that only an insane person would want to return to the U.S. How could one look at surroundings like the Grand Théâtre de Bordeaux, Cimetière de la Chartreuse or the CAPC Musée d’Art Contemporain de Bordeaux and not be overwhelmed by the beauty, all the ways in which Europe–and France in particular–surpassed America on, at the very least, an aesthetic level? Nonetheless, as I sat on a bench along the Garonne, I suddenly realized how tiresome it was to live among so much objective magnificence, constantly imposing itself on you, with all those ascendants of the past looking down on you for not appreciating what they’d done to give you such delightfulness. I had to run back to the house in a perspired panic.

“Nothing Louise, nothing. I just think I’m going to die, that’s all.”

“Well, of course you are. What’s the big deal?”

Between Aunt Louise and Uncle Gustav, it was Louise who most appreciated my “kooky” American sense of humor. I had yet to make another person in the country laugh. She, for all intents and purposes, “got me.”

“I ran into Hélène Manche at the café. She invited us over for dinner tomorrow.”

“Euh…c’est une femme pathétique. Just because she was engaged once and he left her, she thinks the entire world owes her something. I find her insufferable.”

“But how’s her cooking?”

The next evening, Aunt Louise, Uncle Gustave and I were right on time at an early 9:30 for dinner. Hélène practically lunged out of the door to open it right as I knocked. She was wearing a pink chiffon dress with a plunging neckline that was just plunging enough to make you question her motives. Louise let out a sigh of annoyance subtle enough for only me to hear. Uncle Gustav, already too old to care about anything at age sixty-two, merely ogled her and greeted, “Bonsoir Hélène.”

At the table, the conversation quickly stalled, with Hélène having nothing much to talk about other than how long it took her to cook the poulet and the latest news about her ex, who was apparently last seen in the coastal town of La Rochelle, offering boat rides to tourists.

“Well, I guess he’d rather be a plebeian than be with me. I could have given him a comfortable life. But no, he wanted adventure. It is utterly psychotique.” She took an especially large swig of wine and laughed to herself, as though a form of reassurance. “He’ll see. I’ll find love again. Love is all over France. Not like in your America, Mathieu.”

For some reason, everyone had persisted in calling me Mathieu since I’d arrived, even though my real name is Matthias and I prefer the diminutive Matt. But I suppose in a similar respect to Americans, Europeans just want to mold your persona into what they think it should be.

“There is no love in America. It’s all about sex, money and what you can get from the other person. Where’s the passion?” Hélène lamented as she gulped down the rest of her glass. “People need passion.”

“Isn’t that what hobbies are for?” offered Aunt Louise.

Hélène chortled. “You’re very smug for someone with an obese husband.”

The appetizers had barely been served, and already it was getting so culturally stigmatizing that I started to yearn for the ability to teleport back to California, where it was passive aggressive and no one would ever dare tell you what he actually thought about you or your life choices.

The rest of the meal was an expected train wreck, with Gustav dozing off in the salon after drinking too much Bordeaux (Bordeaux in Bordeaux was the only cliche element of the so-called dinner party) and Louise and Hélène bickering with the rhythm of seasoned tennis pros.

I eventually excused myself non-verbally to go to the terrace and smoke. Yes, another thing I enjoyed about Europe was that you could smoke freely without health-conscious judgment. As I looked at the waxing moon, soon to be full in the next couple of days, I began to ponder my addiction to simple American luxury, how it was my bane and my blessing. For, on the one hand, I could stay in France, give Hélène the love she needed and get free everything in return and live a content life of stuffing my face with cheese and baguette interspersed with jaunts to nearby locations like Germany and Italy. But on the other, I would be in Europe: land of the real. I wanted plastic, shiny–blinding in its faux flawlessness. To drive from one place to another no matter how short the distance, to eat and drink of hormone-infused products that would slowly anesthetize me. I wanted America, and I didn’t care if it made me the basest of humans–in short, the most quintessentially American of humans.