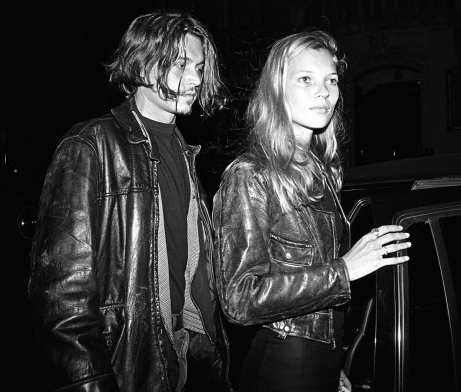 The pawning and/or selling of a leather jacket is not something to be taken lightly. But for Cameron, the decision to rid himself of this singular memento mori of his two-month relationship with a manic pixie dream girl named Natalie (it killed him that she had to share the same name as Natalie Portman) was an almost instantaneous one.

The two had met while playing a show together–he grimaced to himself thinking about it now. It was all so cutesy, so predictable. He was a bassist, she was a lead singer. There was a moment there when they were going to form their own group together. God, it seemed so pathetic and cliche to him now. It was a fluke that she should even deign to go out with him considering her status as the “more famous” of the two of them–the more known on the scene. But he didn’t know her reputation then, that she was more sexually appetitive than a dude. Or at least more sexually appetitive than the way dudes used to be.

Two months ago, she seemed a pure spirit–even purer thanks to her unattainability. But after their bands, hers was called Spunky Brewster, his The Femme Fatales, played together at a remarkably non-DIY looking venue, Natalie finally paid him the courtesy of a glance, which he interpreted as an invitation to saunter over in his skinny jeans (feeling ever-tighter these days thanks to his recent birthday marking his journey into over 25 territory, and therefore metabolic Hades). But when he arrived at her feet the way a knight does to a queen, she barely acknowledged him. In fact, she was rather preoccupied with enjoying a bump of cocaine and lighting a cigarette as her drummer, Sean, a greasy type who was always wearing jeans and a pea green short sleeve shirt and, who, yes, Natalie had fucked, was telling her a story about how the other band he toured with last month ended up booking them at a nonexistent venue in a Pacific Northwestern town with the sort of eeriness that reminded him of Green Room.

Before finishing his tale, however, Sean stopped mid-sentence to glare at Cameron, whose awkwardness was too pronounced as he vacillated between shuffling back to his original perch and actually waiting out Sean’s narrative so that he could say hello to Natalie.

“What’s up man?” Sean asked with faux interest in order to break the ice.

“I just wanted to say, uh, great show.” He could have killed himself right then and there for uttering something so mundane.

Sean, too stoned to roll his eyes, returned, “Yeah, you too.”

Natalie, seeming to notice Cameron for the first time, smiled. “I really like the way you meld Alex James cavalierness with just a tinge of Noel Gallagher arrogance.”

If anyone else had said something so faggy, Cameron might have cut and run, given up music altogether as a result of how many pompous poseurs it harbored. But because Natalie said it without the slightest tinge of irony, as though she truly meant what she said–and because it was the best compliment he had ever gotten about his musicianship to date–he found the courage to inquire, “Do you wanna get a drink?”

Natalie exhaled a plume of smoke and nodded her assent, much to both Sean and Cameron’s shock. Briefly fumbling toward the next step, Natalie decided to take the helm, grabbing him by the hand and leading him out of the venue.

They never did go to another bar, just ended up walking the Manhattan Bridge. It wasn’t until then that he truly noticed the imposing, iconic nature of her leather jacket, tailored to her mild curves and featuring an asymmetrical hemline and four zip-front pockets at the chest. On the back she had emblazoned Spunky Brewster, shameless band promotion a necessity to any success story. And though Cameron had always wished he possessed the courage to wear one of his own band’s t-shirts, he knew he would look like a tool, incapable of making it work as effortlessly as Natalie did. Which was mainly because she was an attractive girl who wore fishnets and could probably get away with wearing anything. But nonetheless he imagined it took her some time to develop the level of confidence it required to wear a leather jacket with her own band’s moniker on it.

“Where did you get this jacket?”

Natalie shrugged. “An old boyfriend gave it to me and then I had to add my own personal touch to it later on to forget that he gave it to me.”

“Is that supposed to be funny?” she snapped.

Taken aback by her reaction, not just because of how generally nonplussed her entire aura usually was, but because of how extreme it felt, Cameron offered the stammered placation, “I…I…”

Natalie laughed, “I’m just kidding.” She pulled her coke vial out of one of the pockets and did another bump. Cameron believed this was the moment he truly fell in love with her. Or, now, looking back on it, it wasn’t her, but this notion of a girl so reckless and self-destructive. He found it romantic, the sort of thing that would suit his music and associated lifestyle–the lifestyle that, up to now, had been embarrassingly tame. He was still just a wayward émigré from Long Island. She, on the other hand, was everything he had envisioned a musician to be: carefree, imbued with raw talent and “cool” in a way that hadn’t really been present in New York City since the 80s downtown era.

Forgetting that he had stopped walking to contemplate all of this about her, she turned back around and said, “Shit, are you trying to stare out at the view or something?”

“I haven’t met any guy that’s wanted to do that since high school.”

She careened back over to him and kissed him, as though they had kissed a thousand times before. As she tried to pull away, he grabbed her by the back of the head and kissed harder. So naturally she kneed him in the groin.

She smacked her lips at him and said, “I’m the one who decides all things of a sexual nature, okay? Don’t fuckin’ test me.”

He probably should have known then that she wasn’t “charming” or an “offbeat vixen” so much as a raging cunt. But smoke gets in your eyes when blossoming love is involved–as any musician will tell you.

After that first night, in spite of the mild physical assault, Cameron and Natalie became inseparable and, soon, their bands were always co-headlining together. They were like the Best Coast and Wavves of the Eastern seaboard. And it was starting to greatly benefit the desirability of The Femme Fatales.

All throughout this so-called mounting fame, Cameron remained hopelessly attentive to Natalie, spending his every last dollar on her to sustain her interest–and when it came to spending his money on her, it always meant buying drugs. Because Natalie was so good at receiving (sexually as well), it would never have occurred to him that she was the gift-giving type. She came off as too self-absorbed, or at least too on another planet to think about such things. So this present she had mentioned having for him sunk to the back of his mind until she ambled up to his apartment holding a large unmarked paper bag.

She beamed at his flummoxed expression. “You didn’t think you’d live to see the day you’d get something out of me, did you?”

“Don’t bullshit me. And don’t get used to the idea of me giving you trinkets either.”

With that, she shoved the bag in his chest and stalked inside. Knowing better than to open it in front of her, he stayed outside and removed a leather jacket with The Femme Fatales graffitied across the back. He was genuinely touched by the sentiment, further heightened by the presence of a piece receipt paper in the corner of the bag that read, “We’ll be like the Kate Moss and Johnny Depp of this town.”

He put the jacket on right away and walked into his room wearing it to show his gratitude. She had already undressed and had her legs spread, smoking her cigarette with casual interest.

“It looks good on you” was all she said before pouncing on him.

Remembering that day now, Cameron wished desperately to return to it. No one ever tells you when the zenith of a relationship is, and if they did, you would be able to track the trajectory of where it all goes astray, and where the first major nosedive occurs. For Cameron, it was probably about a week after he got the jacket, and Natalie started to criticize him and his band’s “shitty style and sound.”

“It’s getting really humiliating to play with you guys. It’s so fucking wholesome. I should just get BBMak to open for us instead. At least it would have novelty value,” she added.

The sudden onslaught of verbal abuse was hurtful, but something Cameron was willing to endure for the sake of believing he loved her.

It wasn’t until five days ago, when he caught Natalie having sex with Sean on his drum kit before rehearsal that his haze was broken. She couldn’t even be bothered to act contrite by ceasing to fuck him upon being found, instead humping more violently to get her orgasm. It was almost like a scene from hell, or maybe Caligula’s bedroom. Both were comparable, he assumed.

So now, after two months of this false romantic reverie, Cameron was faced with the dire need to get rid of this jacket, no matter how little the nearest thrift store was willing to give him for it. Since they would be the ones doing him a favor by taking it off of his hands, he didn’t care. It was the only tangible link he had to Natalie and he needed to purge himself of it.

Alas, Cameron was met with the derisively assertive, “We can’t take this. The graffiti look isn’t marketable right now.” Each snarky thrift store employee said something similarly dismissive about the value of his leather jacket. And to think that, to him, it had been the most precious thing in the world for such a lengthy block of time (or relatively lengthy by New York standards). Then again, maybe his own changed perception of it had rubbed off on everyone else.

On his way back home, he tossed it in the nearest trash. It was now just another relic amid the others that most likely, at one moment or another, represented when a relationship wasn’t total shit.