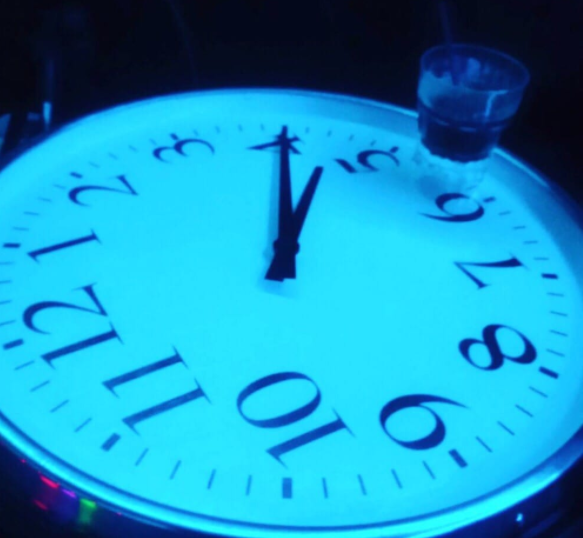 “I’ve been going out since I was thirteen,” Vortex says with an overt tinge of jadedness in his voice. He’s twenty-three now. Day old bread by club kid standards. He complains of everything that was ever good in Hollywood being defunct now—that blockbuster club culture in the vein of Arena can never exist again. I ask him why. He says no one goes out anymore.

“They’d all rather do drugs at home.” Another one of the many hindrances brought to the surface by a city that operates solely on driving.

He doesn’t appear sad or nostalgic as he lays bare the facts. He doesn’t appear to be anything. It’s as though he stamped out his feelings years ago with a steady diet of coke and ketamine. He already doesn’t trust me because I turn down the offer of a bump multiple times within a twenty-minute period. His apartment is at what might have been called “the center of it all” back in the 1940s and 50s, on Franklin Avenue near Hollywood Boulevard. And its stained carpeting, 8 x 10 glossies of various old movie stars on the walls and assorted opened pill bottles on the coffee table possess just the sort of aesthetic a struggling Norma Jean Baker could get on board with. The location of his living quarters is yet another way in which something about Vortex feels hopelessly trapped in the past.

He’s wary of our interview by now, and in spite of his desperate need for publicity at this point in his party career, he makes no attempt to cater to me. Acknowledges in no way that I am Sara Vida, easily the most powerful journalistic authority in L.A.-based lifestyle magazines. Instead, he pours himself another glass of straight vodka and delves into the lamentability of how many drugs have now been deemed Schedule 1 by the federal government.

“Are you suggesting most club kids are likenable to psychotics?”

“Duh,” he snaps, swigging the vodka and snorting another line.

I waffle, already knowing where he’s going with this. “Pretty normal, I guess.” And in this admission, I brace myself to cede his inevitable point.

“Mm okay. Well, I was raised by a senile grandmother who was utterly oblivious to the sound of my mother lighting her crack pipe whenever the state granted her permission to come over and read me a bedtime story. Okay?”

He glances over at the I Love Lucy clock above the TV in the living room and sighs. I can’t tell if he’s upset that it’s still too early to be “respectably” on a substance or if there’s actually somewhere he might need to be. When I realize he’s spaced out completely, I direct him back to the subject of club kids and their familial backgrounds.

“Right. It’s psych 101: we’re looking for the family we never had. The family that understands.”

“But don’t you think that there are plenty of people like that? If this is the logic, why isn’t every product of a damaged psyche a club kid?”

“They are. Some are just better at executing the lifestyle.”

And so, this is how I choose to conclude my article on Vortex, trying my best to reinvigorate interest in his newfound granddaddy appeal at the tender(ized) age of twenty-three. I don’t highlight that, indeed, one must essentially be a kid to fulfill one of the requisite halves of what it means to be a club kid. I title the piece “Caught in the Vortex,” and feel that this is exactly what Vortex is. The “scene” as he knew it no longer exists, or has morphed into something unrecognizable. He can neither go back, nor forward, trapped in more ways than one in that apartment on Franklin, just beneath the Hollywood sign.