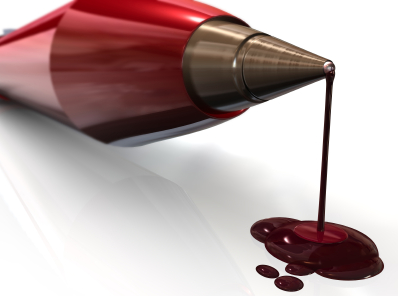 Knowing me is dangerous, I’ve been told. It puts your life at risk. Well, my version of your life, anyway, which I think is pretty accurate. It’s just that you don’t want to see it that way. They say a girl is a gun… but only if she’s willing to shoot. Otherwise, she’s just a repressed motherfucker. I am a repressed motherfucker, but only in spoken verbal form. Never on the page. On the page, I claim what I can’t in life: the ability to be noticed. I can say what I am too cowardly in the “real world” to express. I can repaint the scene, the narrative exactly as I saw it while watching it from outside the barrier that is my body. It’s always better in the story, because at least in the story, even when I get fucked over, there is something about it that I can make poetic. In life, there is no poetry. It’s all complete and utter shit. “Well, you keep thinkin’ that way and it’s going to become a self-fulfilling prophecy.” Oh, really, is that so Dr. Redondo? Then why didn’t my long-term positive thoughts about becoming a fashion designer with a boutique in Milan come to fruition? Yes, I abhor the term “self-fulfilling prophecy”–it’s a lazy way to explain away why bad things happen. And don’t get me started on The Secret. The mind and the will–whatever you attribute to “conjuring” your desires–will not save you from the inevitable pain of engaging in any kind of relationship.

So, why not change the story in one alternate universe? I guess that’s how I eventually became a fairy tale writer. Sure, it was satisfying in one regard to kill my ex-boyfriend over and over again in fiction or make him contract herpes, hep C and gonorrhea from a trip to a geisha house (but who am I kidding, Japanese women are way too careful to ever let that shit happen to them–it was my least credible story). But in certain other regards, I had already lived the disappointment. Why did I want to keep reliving it?

That’s when Dr. Redondo suggested I might try the other extreme in my writing–nothing but happy endings, which, yes, would also make a good name for a geisha house. Since I was experiencing a mental block at that time anyway (mercifully paired with a financial boon), I decided to, for once, make it seem as though Dr. Redondo was worth what I was paying her. By very definition, the modern fairy tale genre is marked by the presence of everything returning to normal or even better than before by the conclusion–not the pre-Disney era ones of course; Hans Christian Andersen had nary a romantic bone in his body if you look at the original ending of The Little Mermaid. But I’m not dealing in the sadistic aspects of a Danish person. I’m dealing in pure, unbridled schlock, and my god does it make me a lot of money. I always knew how much people wanted to believe in lies, but I didn’t know quite the extent of this worldwide human desire until I started releasing my fairy tale collections. The first one, The Wife With No Hands, was a riff off of another, much more depressing Italian story called Penta of the Chopped Off Hands. Read it sometime, it’s how fucked up life really is, to be honest. But I made it about a man who has been married to his wife for only a week before she has a mental episode and fashions a hand-tailored guillotine on the kitchen counter to fall perfectly on both of her wrists so as to detach each appendage. When the husband comes home, he’s only momentarily horrified by the sight of her before scooping her up in his arms and taking her to the hospital. While the average guy would have looked for the quickest reason to extricate himself from the marriage, he does not. Instead of leaving her, he stays and stays, tending to her every need, even going so far as to get his own hands cut off by the end, so that they’re true equals again. And then of course they start a successful dual empire in antidepressants and prosthetics. The masses ate this shit up. They couldn’t get enough. Which is why it got turned into a movie, obviously. And then this just opened the floodgate for all my other terrible fairy tales. It didn’t matter what I wrote, so long as there was a dramatic struggle at the beginning that resulted in the couple getting together in the end. I mean, I thought the current generation was at least a little more cynical. But no, it turns out everyone secretly wants to buy into the forgery of what love should be. Although I have no idea when this collective delusion was first formed, looking back on some of the most illustrious “couples” in history–Zelda and F. Scott, Henry and Anaïs, for example–I know nonetheless that it simply can’t be stamped out. Hope dies last. Or is it self-deception?

One day, however, after five years, three fairy tale collections and seemingly countless adapted screenplays both for the silver screen and TV, something inexplicable happened to me. Just as I had received a very large royalty payment for The Wife With No Hands, I felt sick to my stomach, something within me crying out: fraud, fraud!, in a frog’s croak, naturally. I had to tell the truth again. I had to inflict the agony of my reality on anyone who fell prey to reading. But then, perhaps I am giving too much license to my effect on people. No one reads what I say. I’m just another writer-masturbator in the ether, and not even one that “tastemakers” of the literary world have deemed fit to promote. But, oh sure, they’ll suck up the lies more readily than a mosquito does blood. Give them the gory details, though, and they’ll close their eyes to them faster than a heart after it gets broken. Oh my. I still have the affliction of romance-speak all over me like cum from that fairy tale rabbit hole. I’ve really got to get back to talking shit.