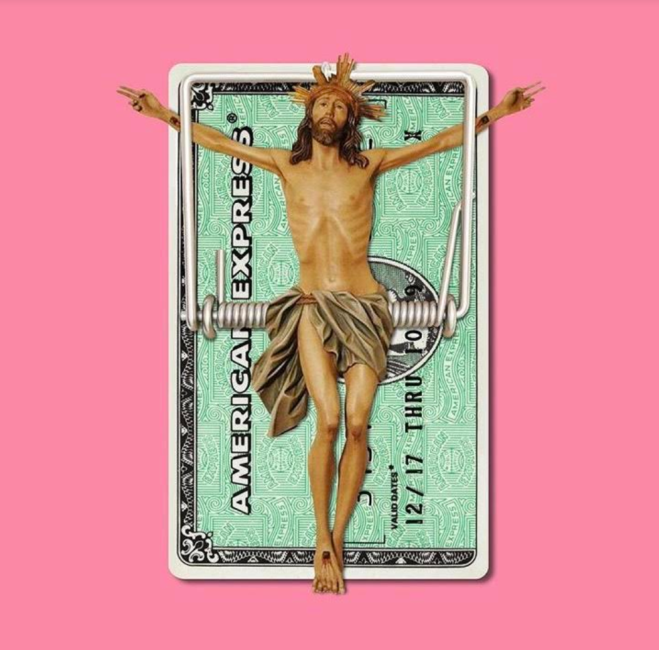 Satana Rovinato thought that dying would be the solution to all her problems. Chiefly, relieving her of the massive amount of credit card debt she had racked up in these modern times when one must either work in a profession from the dinosaur age of humanity (e.g. toiling in an office with rows and rows of desks practically stacked on top of one another) or create her own job out of thin air like P.T. Barnum (but even he needed a mound of money to do that). So instead, she lived plastically. In short, she lived like everyone else felt in terms of being a fraud and suppressing it. What else is society to do, if it’s to continue on without committing one collective and complicit Jonestown Massacre?

At thirty-four years old, Satana was starting to comprehend what her parents had cautioned her about all those years ago when she was a youth. Those warnings they had intended to be ominous, but instead, at the time, went right over her head. “You’ll see, Satana. One day, you’ll wake up and you’ll find yourself an old woman and wonder where the time went,” her mother was especially fond of saying before Satana fled from Torino for the capital of plastic, Los Angeles. And it was true, one day she did wake up in her efficiency apartment just on the border of Los Feliz and Glendale when the epiphany smacked her on the face like Ricky discovering Lucy had spent too much on a dress: time is slipping away. Each day passes faster than the last. And with it, my debt only increases, becomes a heavier albatross around my neck.

Within the next few months, she knew she would max out all six of her credit cards (applying for more had already been ruled out since all the companies were on to her scheme of paying back an extremely low ratio of the amount incurred). A logical person would take this to mean it was time to seriously start looking for work. Satana, Italian by blood, was far too accustomed to living the dolce far niente lifestyle to even consider this notion. She was very much one of those people who, the less they had in their bank accounts, the more prone they were to spending. What’s the point in trying to save? I’m broke anyway, she rued. So she went H*A*M, as Jay-Z and Kanye West would datedly say. Going to Rodeo Drive to re-create Vivian Ward’s second shopping experience for no good reason, booking a flight to Sydney when she noticed an unbeatable $900 round trip price. It was the week that she was due to fly out that she had made up her mind to end things. What else could she do? She couldn’t very well live and work and she couldn’t very well pay off the debt any other way. Death was the only solution.

So she put together a very romantic suicide plan for herself to be executed while in Sydney. Or maybe she would travel to the bush or New Zealand for an optimal abyss backdrop to punctuate her slow but poignant demise. It would start innocently enough. Drinking too much at a bar, medicating with pills and then walking off into the middle of nowhere to let herself dehydrate and starve slowly. Because, surprisingly, even though she was all for instant gratification in life, she wanted to prolong the pain of death. Wanted to earn it or something.

So she waited. It only took about five days before complete expiration was achieved. Every now and then, key moments of her existence would flash before her. Just as they always say it does when you’re about to exit this realm. She thought of her mother and father, and how they had disowned her for leaving the country, insisting that a move to America was tantamount to sleeping with the enemy (it was how all of Europe seemed to feel these days). She thought of her only sibling, Marco, and how he’d been the family’s pride and joy by sheer virtue of being a man. She thought of her first and only great love, Giuseppe, and how he had told her he wanted to move to Istanbul and start over again, plans that didn’t include her. That was just three years ago. He had probably had no trouble starting over. Men never seemed to, masters of personality disguise and self-denial that they were. But now, she was finally ready to start over, too. And, in all likelihood, she would never be found. Only by the vultures. And they’d never tell her secret.

She awoke, as she expected, in the dimension she assumed she would, what people on earth like to call heaven but can more accurately be described as a tesseract for those who couldn’t endure the ills of life anymore, whether physically or emotionally. At first, Satana was elated to be there, the burden of thinking about her credit card bills and trying to become an actress extracted like a blackhead during a facial. But soon, the vibe of the entire place was beginning to feel more like a prison check-in. She was met by a “consultant” named Anamaria, assigned to take on her “case” until she readjusted to the new environment. “Why don’t you tell me a little about yourself, uh, Satana.”

Satana rolled her eyes. When would she get to the non-bureaucratic part of death? It was the main reason she checked out of life. She was starting to think she might see Kafka in his old position as a bureaucrat at this rate. “There’s not much to tell. I was born in Torino, I moved to Los Angeles to try to become an actress and even though I put out, it never happened.”

“How did you pay for your lifestyle?”

Anamaria made some sort of tick mark on her screen and nodded slowly. “I see. So would you mind telling me why you killed yourself?”

“I didn’t,” she lied, suddenly terrified that this would give her another unfavorable tick mark. “I expired in the desert. I had no intention of dying.”

Anamaria pursed her lips. “Okay. I think those are all my questions for now. Why don’t you go explore the grounds? We have many similar corporations to the ones on earth.” She looked Satana up and down. “You might consider changing your outfit for your consultation with Lucifero. He’s the one who will be determining your…area assignment.”

Satana glanced down at her tattered garments and disheveled, long brown hair. She supposed she was looking a bit frumpy, but shouldn’t heaven be a place where it didn’t matter what you looked like? Didn’t need to put on airs for some sort of ‘interview’? This is when she began to panic slightly, taking her leave from Anamaria in search of a hair salon and clothing store that might help her cause toward being given a decent “area.”

She still had some scant amounts of money left on the credit cards she brought to Australia to pay for any of the provisions she decided upon. As Anamaria said, “You still have to pay for your own essentials until you’re given an assignment.” Evidently, heaven wasn’t the socialist, subsidized paradise she had anticipated it to be.

It was after her credit card was denied in several non-related in motif businesses throughout “heaven” that she realized what an older Italian woman next to her with cash in hand felt the need to declare out loud: “Oh honey, this is hell. It’s cash only.” Satana was bereaved, to say the least. Not only had her plan for escape failed spectacularly, but “cash only” was a characteristic worse than the fact that hell was filled only with other Italians.