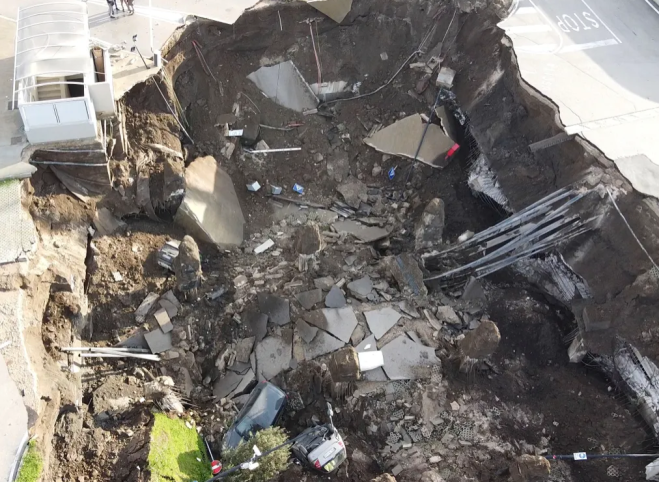 As with most holes, this one simply “appeared.” As though it had been there all the city’s life. As though it were the most natural hellmouth in the world. It could never have been elsewhere because it had always “been,” at least in the eyes of those Neapolitans who passed by it nonchalantly each day on the way to the hospital where they worked, or, more likely, on the way to take a gamble on Italian medicine as a “patient.” The ever-widening sinkhole (which began as  a 66-foot deep, 21,527-square-foot chasm) had been in front of the Ospedale del Mare for as long as Concetta could remember. As well as her mother before that, who informed her that it “was just there” sometime around 2020, maybe ‘21. In the forty or so years that had since passed, the sinkhole only looked all the more at home in the environment that had since cropped up around the building, which was more of a “fallout shelter” than a hospital at this point.

Even in the era when it was being used primarily as a “COVID hospital” (“Oh corona, so quaint,” Concetta mused to herself now and again as she put her massive gas mask on over her head before leaving the tenement each morning), it was not exactly a picturesque milieu. While “state-of-the-art” at the time, the exterior always looked like some attempt at being a “pleasant” mental institution. Now it was a “pleasant” crumbling edifice serving as a catch-all to anyone who needed sanctuary and/or crude health services. Concetta was one of the few left still formally trained in medicine. She did her best not to exude too much of an air of superiority toward the others she felt were only making matters worse whenever they decided to tinker with the bodies of those who took a risk on coming in with no other option to turn to. Often, of course, Concetta could not imagine why they still struggled so hard to fight for their horrendous lives. Even her own was not that much to envy and she herself thought about ending it almost daily. So how could these people possibly find it worth their trouble to continue on–to use every last shred of will power to come to a “hospital” where they had to pass a sinkhole that might swallow them up arbitrarily and at any moment?

The lore surrounding the sinkhole had only augmented with each passing year. Almost as augmented as the giant orifice itself. Many gave credence to the legend that the hole would increase unexpectedly in size anytime it “felt angered” by what locals were doing. This soon extended to the world at large, for Neapolitans were fairly certain they couldn’t be the sole parties responsible for all this manifested rage. Though they might be il sole reason. And that’s when the theory started circulating that if they “brought it snacks” (to use an American parlance), the hole would at least be less hangry, therefore inherently kinder. Unfortunately, the Neapolitans failed to foresee that this would breed an entirely new animal (or rodent) of a problem: rats galore. That was the previously unspoken horror about having to pass by the sinkhole in order to get to the semi-hospital–it was filled with ravenous, raging rats. At the center, of course, was a giant rat king, the tangle of tails forming the “eye of the storm” that made Concetta grateful every day that at least they lived in an inhospitable environment in which she was forced to wear a gas mask. That way, she was provided the “blinders” needed in order to walk next to the “throng” every single day.

Others–the ones who traveled from near and far to get to the hospital for the chance of receiving some kind of care, however unprofessional–were not as lucky about avoiding the sight of the rats. For not everyone had such an impenetrable mask. And frequently, the sinkhole would serve as a sort of Charybdis, in effect making the rats Scylla. The point was, it was an Odyssean nightmare to manage “traversing” the sinkhole. And even once you did, there was no guarantee it would be worth the strife. In fact, there was no guarantee of anything. Not that there ever really had been in Naples, but this was a new echelon of “no guarantee of anything.” In short, “the futuristic” version of it. Concetta sometimes yearned to live in the days of 2020, when it all seemed so simple–and the sinkhole hadn’t even been “born” yet. It was still a pristine parking lot… or so the lore said. Who knew what was just another overblown detail or simply made up altogether? The internet was a fabled thing of the past now, having “gone dark” for the poverty-stricken unable to afford the upped monthly fees required for the privilege to use what had once been deemed “the great equalizer”–at least in terms of access to objective information. That was before the far right chat rooms sprung up…

A sinkhole grows in Naples and no one seems to mind anymore. They are used to it by now. They are used to the collective pain they feel. So much that it’s not even like a pain anymore, but rather, a dull ache that one gets used to over time. In the end, it’s all about learning to manage pain when it comes to navigating a dystopia. Especially one that you’re not even aware fully of because that’s always the way things have been.

One part of the legend of the sinkhole that never got as much visibility as the “bring it snacks” aspect was the one where the mafia played into its rise. The Camorra had reanimated like an unstoppable Hydra-headed beast every time it was theoretically “killed.” Its contribution to the inferno-like state of Naples is what others believed truly caused the sinkhole to materialize. It was a reflection of Dante’s seventh circle of hell, the one reserved for the violent–murderers and gangsters can be nothing else, therefore belong nowhere else. And since not enough were coming down to visit the inferno, it, apparently, decided to come on up and visit them. This gave way to the other myth that the rats were, in fact, former mafiosi condemned to a life of now living in the forms they metaphorically embodied prior to this sinkhole relegation.

Concetta, every so often, heard some of these folkloric tales dredged up whenever she managed to “turn the sound on” in her gas mask (the mute feature was quite magical though, she had to admit). They were usually repeated by the dying patients who decided to take their last breath at the semi-hospital rather than spend it doing something enjoyable. To be fair, however, there was nothing enjoyable left to do on Earth, and there hadn’t been for quite some time. The sinkhole was merely beckoning those still fighting to breathe to surrender to the underworld. Where it would be oh so much more fun. Or at least not so goddamn drab and dreary.