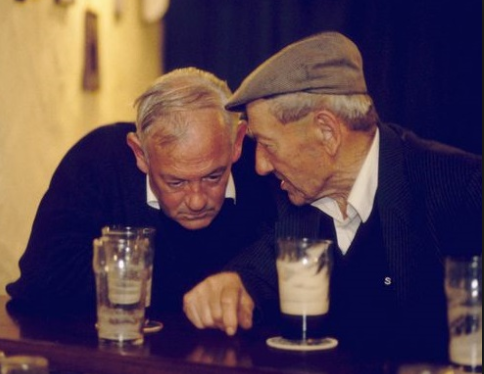 Somewhere in the manicured abyss of Boerum Hill, there exists a bar that serves as a portal to what nostalgics lovingly call “old Brooklyn.” It is discreet amid its Starbucks and Chipotle environs, as though developers and real estate sharks didn’t even notice it was there long enough to demolish it. But for 41-year-old bartender, Gilda, it was a place very much there and very much alive with the voices of the past.

Though she would objectively be deemed “old” by the outside world, inside the bar, she was as young as they came. The regulars who worshipped her—Joe, Mike, Bobby and Clint were their names—did so with unbridled devotion, and each one was bawdier and more alcoholic than the last. There wasn’t a story Gilda could regale them with that wouldn’t somehow turn perverse as a result of their interpretation. In the midst of telling her latest doozy, about how she had gone to a Bay Ridge bar with her husband, Joe managed to take her saying, “This barmaid was 85—you know, a real broad,” and transform it into something sexual by remarking, “My kinda woman.”

Gilda didn’t even bother to roll her eyes at this, accustomed as she was to Joe’s humor, instead continuing her tale by explaining, “So we were the only ones in there and my husband insists we stay because he feels bad and that’s when I notice the Poker Joker and start playing. But then I can’t even enjoy myself ‘cause the broad’s tellin’ me, ‘No that’s not how you do it!’ So finally I put my foot down to my husband and I says, ‘We gotta get outta here.’”

The regulars laugh at her misfortune, the ill luck of being trapped alone in a bar with a geriatric—though this is what happens to her almost every day. Gilda couldn’t tell anyone now what prompted her to sustain a career in “bar services.” It was always her intention to leave, but, as most of us who fucked it all up know, intentions are often for the birds. In many respects, she stayed long after she should have because of the regulars. They were like a sort of surrogate family to replace the one she had left behind in Pittsburgh. And who could resist the annual Christmas party Clint threw out on the Hudson, sharing the rewards of his years spent managing a construction firm by inviting friends and acquaintances alike onto his boat.

Still, in spite of Gilda’s intimacy with the quartet, there was much she didn’t know about them, as though the wall between her and the bar countertop could never fully be broken down. But overhearing their conversations throughout the years, Gilda felt she was their protector and advisor.

Bobby, now approaching 67, lamented, “Gravy does it to me. I guess red sauce now, too.”

Guffawing at the very suggestion, Bobby reminded Mike, “Back in the Middle Ages, they just downed wine. They just lived with that pain endlessly.”

“Yeah, well, this ain’t the Middle Ages and we’re damn sure not in Europe. Thank god,” Clint interjected.

Yes, they were Brooklyn through and through. And Gilda had grown fond of all their speech patterns, quirks and general grossness (most women couldn’t endure the frequency of belching in their direction the way Gilda could).

Until one day, an opportunity arose—a chance to finally break out of the cycle of monotony she had created for herself. Now that her husband, a teacher at a Carroll Gardens high school, was retiring, he surprised her with something he had been planning for years: the money he had set aside for her to open her own bar, wherever she wanted. It could be a chance to at last leave Brooklyn, and start all over again in this new phase of their life together.

Elated at first, Gilda’s heart sank when she thought of her regulars, sitting there alone without her. Some rude, impersonal 22-year-old taking over her position. Or worse, a man. She knew she oughtn’t base an important and rare life decision on them, but so much of her life had been enriched from being near them that she couldn’t help it. When she explained this to her husband, he balked, “You’re going to throw our future away on four losers who could never kick their drinking habit?”

He didn’t understand. Couldn’t. The relationship between a bartender and her regulars is almost like the one between therapist and patient. She was Dr. Melfi, for fuck’s sake—why couldn’t her husband see that? Leaving them now could very well set off a crack in the Brooklyn universe.

And so, after much deliberation, arguing with her husband and going back and forth with her final choice, Gilda declared, “I can’t leave them.”

But her husband didn’t want to stay in New York, hadn’t wanted to for quite some time. He was a west coast boy and therefore prone to softness. The kind of softness New York wants to beat out of you until you’re so hardened around the edges you could be wielded as a weapon.

Gilda was upset at first, sure. Especially since she lost out on all that money he had saved for her, but when she told the quartet about what she had done, they smiled upon her and embraced her.

“Well, fret not Gilda. We wouldnta let you leave even if you had tried,” assured Joe.

And the next day, when she arrived at work, there was a massive ribbon around the countertop. As she got closer, Clint, Bobby, Mike and Joe all popped out from behind the bar and screamed, “Surprise!,” uncorking a bottle of champagne as they did so.

You see, it’s always guys like Gilda’s regulars, ill-dressed, ill-spoken and limited in interests, that seem to have the most unexpected financial resources. And it is as a result of this that they bought Gilda the bar, where she spent out the rest of her employable days serving them—well-surpassing that 85-year-old “barmaid” she had told them about so many years ago now. And when all her regulars had died off, she commemorated them with plaques at each of their barstools—the places where their asses sat were hallowed now. And she was the sole keeper of their memory.