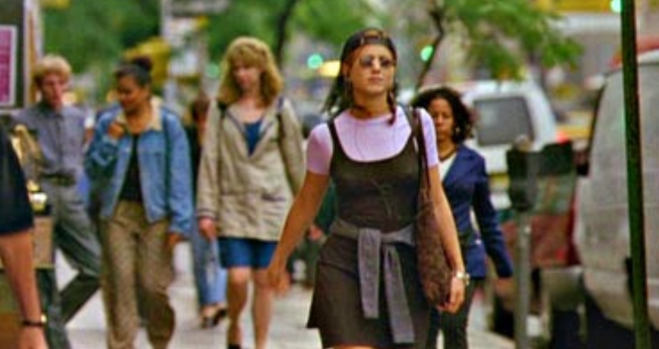 It was unlike her to wear hats of any kind, though they naturally suited her–much in the same way they did Cléo in her hours from five to seven. Yet today was marked by inexplicable whimsy, and, accordingly, Augustine felt compelled to put on a New York Yankees baseball cap–more out of character for her than even something bombastically anachronistic in style, like a cloche. Fearing the worst the second she stepped out onto the street, that everyone would regard her accessory choice with disgust, Augustine was pleasantly surprised to find that no one regarded her at all–treated her as merely another face in the crowd to be ignored rather than mocked for her aesthetic. That she had paired her look with high heels, a pencil skirt and a blouse made her feel endlessly clever–like some sort of fashion genius of mixing and matching. Of course, if she had ever seen Picture Perfect starring Jennifer Aniston, she would have known that this innovation had been executed long ago, and was really nothing very special–as is the case with most clothing. Hence, Miranda Priestly’s overly maligned fastidiousness.

On her way to Louis’ increasingly dilapidated apartment (it had only grown a thicker film of dust and decay with each of her visits over the past four years since he’d moved in), it occurred to Augustine that maybe she should take her fanciful hat decision even further by deciding to turn it backwards. The Picture Perfect look perfected. And as she scampered toward the train with a spring in her step, she contemplated why it was that it took the mere lack of public notice (and therefore acceptance) to make her feel at ease with herself. When really, public approval generally meant that one was in keeping with the mongoloid culture that had been perpetuated in order to keep lesser people in charge, and “freaks” feeling like they should kill themselves. And, of course, we’re not talking about the type of freaks that could be marketed to like those that made Hot Topic successful for so long, but people who genuinely could not function in the world without wanting to cry or scream every time they found themselves interacting with the “average American.” Augustine would have been just one such person had it not been for Louis, her longtime friend who had taken an unusual amount of time to declare himself as bisexual considering he had been living in New York for roughly fifteen years. It also might have saved Augustine the time and trouble of attempting to make their friendship transcend into more as, anyone willing to be honest with themselves knows, bisexuality always means being more same sex leaning.

After she texted him two blocks’ notice of her presence (he didn’t have a buzzer), he emerged from the front door with a cigarette in hand and a lighter ready to kiss it. As he inhaled deeply, he remarked, “There’s something different about you today.”

“No. It’s something more than that. You have this altered energy.”

She looked to the sky, a cliche “V” of birds passing by as she did. “Life.”

It was a challenge to spend any extended amount of time with Louis. Augustine only ever remembered this after it was too late, and she had already consented to a hangout session. While their shared history offered an endless wealth of laughter and conversation topics, it was often tinged with a certain darkness as a result of Louis’ negativity, which could rear its not so passive aggressive head at any given moment. Often, the comments of derision would be lashing toward Augustine, who could say something as simple as, “I really like this pasta,” to which Louis would retort, “Have you licked so much dick that all your taste buds have dissolved?” It could be rather jarring, especially since, of late, Augustine had been trying with diligence to remake the trajectory of her life, de-thorn it, so to speak, of all the deprecation that, in effect, amounted to defecation on her happiness.

Louis was one of the final thorns she would need to rid herself of. And though she had intended to tell him point blank that he needed to stop treating her so venomously or she would cut him out, she knew that to do so would be in complete vain. People like Louis don’t change. And it wasn’t just because he was thirty-eight and set in his ways. It was because a person of Louis’ nature fundamentally believed that the world owed him something, that he was of great enough importance to deserve more as opposed to working for it with the potential of still not getting it. Augustine, just one year younger than he (their friendship had formed in high school based primarily on the fact that he got his license before her and could therefore drive her to and from various strip malls), felt that if anyone should be more susceptible to this mentality, it ought to be her. After all, she was the one who had never managed to make anything of the talents she had been praised for while in school, the ones all her teachers assured her would make her a success. Had she not been so naive, she might have figured out long before leaving college that there was no money in art when you didn’t already have money to begin with. Least of all when it came to the medium of ceramics. Louis, on the other hand, had been an active member of the drama scene while they were in high school (which, of course, was the first tipoff of his sexuality), and was convinced he would “make it” immediately upon arriving in New York. Instead, he found himself working a dead end job as a manager at the Chipotle on Park Avenue South (at least it wasn’t the one across from Trader Joe’s near Union Square) before parlaying his way into a gig as a scriptwriter for a “popular” podcast (whatever that meant, as only a very specific type of nerd and/or douchebag listens to podcasts).

Augustine had remained in their native Minneapolis for a while longer, not wanting to take the financial and emotional risk that came with New York just yet. By her twenty-fourth birthday, however, she couldn’t deny the inevitable, turning to Louis for the support she would need to move–which, yes, meant, a place to stay for a maximum of two weeks so that she could get herself set up.

And now, here they were, thirteen years on, the same toxic dynamic still flourishing. But she would allow Louis this one final tribute to their friendship. The belief that this wouldn’t be the last time they saw one another, and that nothing had changed between them. He stubbed out his cigarette with an enraged flourish and motioned for her to follow him up the stairs.

They opened the first bottle of wine as he ordered the Indian food that would serve as their dinner. Taking a sip from the glass, Augustine then set it down to go to the bathroom to use the mirror. Removing her cap, she re-tousled her light brown hair to make it appear as though she had never worn a hat that day. She then went into the living room to deposit it on top of her coat.

As Augustine tried to talk to Louis of some potentially beneficial to her lack of career events–like an upcoming solo show in Red Hook–Louis glugged away at his glass, seeming totally disinterested until he could complain about something in his own life, whether romantically or professionally. Though living in New York had most definitely lowered Augustine’s standards for what a quality friend was supposed to entail, she knew she was getting too old to tolerate this degree of one-sidedness. She sighed and let him persist in his rant about how he deserved a more fruitful career, one that would make his rapier wit more available to the public on some such outlet as Saturday Night Live or Last Week Tonight.

When they had polished off the first bottle of wine, they moved on to the second and then to the couch to watch one of the very sketches from the former show he had mentioned. As he laughed at all the expected moments, Augustine turned to glance at the glare of the screen against his noticeably wrinkled, perspiring face. Louis was a person who, like so many of us, had frozen the image of himself as he was at his most aspiring age in his mind as a means of self-preservation. Of believing that a dream doesn’t have to die. That things aren’t as they should be just yet because there’s still time to make them so. It made her feel a pang of melancholy to watch him titter over there like that, like she was seeing through a window into her own self before she had decided to re-steer the course of her life toward one of acceptance and doing the best with the hand that was dealt.

After about another two hours of retro clips, Louis announced that it was time for her to leave. She wasn’t surprised by this, as it was his usual brusque fashion. Eager to get out herself, she collected her coat and purse in haste, leaving behind what would be Louis’ only link to her in the future: that New York Yankees cap. Maybe the whimsy of putting it on that day had been solely as a means to provide a souvenir of their friendship.