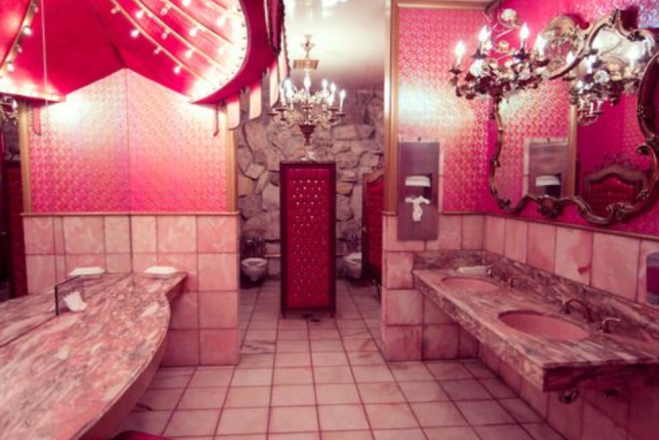 She couldn’t say when or where it began. Was it high school? When she first started going to a lot of DIY shows ergo had to use a lot of public restrooms? Or was it even further back, when her mother would make her go on church retreats that involved camping, hence ample opportunity to be caught squatting by her peers (who were weirdly perverse in their voyeurism precisely because of being “Christian”)? Heaven couldn’t say. And yes, her name was Heaven as a result of her mother’s aforementioned ties to Christianity. Heaven had to snicker at the name now, the one her mother seemed convinced would force her to be “a little bit of”/the ultimate virtuous close-legged girl. As most of the rest of the world knows, calling your daughter something like Heaven is a surefire way to send her down the path of stripperdom.

She didn’t quite land in that arena, but she did become one of the most sought after purveyors of MDMA by the time 1996 rolled around (no pun intended). It was in this profession, of course, that her gravitational pull toward public restrooms persisted–the stalls of staples like Cabana Nights and Coconut Grove serving as her office space. Even so, that didn’t mean she didn’t need to use the toilette for legitimate purposes now and again. But it appeared that every time she did so, a strange set of circumstances would occur to make it so that some being, whether male, female, trans or undecided, would somehow manage to trip the lock so that they could miraculously burst in on her, legs akimbo, bush askew (regardless of the warm temperatures, Heaven refused to engage in the common Floridian practice of vag waxing–even for the over eighty set, it appeared…or had these women’s pubes simply been waxed out of existence after so much time?).

In defiance of the commonality with which these “walk-ins” would occur, Heaven would consistently act shocked and appalled at the violation–then again, just because violation is one’s daily par for the course does not necessarily make her immune to being disturbed by it. In the face of her outrage, her numerous friends and clients would insist that it was her own fault for not putting a sign out or something to differentiate between when she was dealing and when she was pissing (or, let’s be honest, shitting out coke). How were they supposed to anticipate what she would be doing in the stall, all of which only functioned so well before someone could simply push the door open with enough give (sort of like a hymen)? Heaven denied their excuses, returning that she was the only one forced to suffer this ill, this unwanted phenomenon that trained her to use the bathroom as though she was expecting an air raid at any moment. All that someone like Milkma Tits (the resident drag queen of one of the clubs) could say was, “Sounds like you’ve got the Ferris Bueller conundrum: being born under a bad sign.” This was, mind you, still at a time when the mention of Ferris Bueller didn’t set off immediate rants about the absurdity of white privilege and a general inability of white people to conceive of what true adversity could be.

Heaven, thus, tended to agree. Maybe she was born under a bad sign. Or spawned from a bad seed that bequeathed her equally bad luck. Her mother did eventually confess that her father’s true disappearance was not a product of full-fledged abandonment, but rather, as he was deliberating on whether or not to return home ever again from his mistress’ in Little Havana (he had a thing for “darker” women that made it totally impractical to have married a purely Caucasian person like Joan), he was struck by lightning, in a fluke storm the likes of which hadn’t happened since. Yes, it had to be her father’s fault. It was always the father’s fault when it came to fucking up girls.

Ascertaining, while on ecstasy, mind you, that if the root of her bad bathroom luck was her father, then the best way to shake it would be to move as far away from his residual energy as possible. For her, that was California, Florida’s flipside and less maligned alter ego. So she decided that’s what she would do. Hang it all up without making any announcements to her fake friends and even faker mother (she was entirely made of silicone at this point, and had a full life in the form of her younger boyfriend, Rick, who “loved” her for the shelter she provided). Maybe she could transition from ecstasy to weed instead of giving up her sales career entirely. But no, she reasoned, a fresh start meant a new profession.

In 1997 Los Angeles, that meant an office building in Culver City. One that, for some inexplicable reason, offered only one bathroom for the entire floor of eight offices to share. Heaven had not anticipated such a thing–had not thought to ask about the bathroom setup during the interview or upon being offered the job as a talent agent’s assistant.

So when she was met with this jarring reality on the first day, she felt as though in a fog. A cruel loop of unshakeable déjà vu. Waiting in line with the other nonentities (that was what all people of her salary grade in America were), the revelations kept getting worse as she came to find that the large stall (the one so generously intended for handicap people who never seemed to work at places such as these) was wide open as she heard a woman flush the toilet and then come out of it. Why was the door open while she was urinating? rang her mind’s alarm.

She looked back at the nonplussed Asian lady standing behind her. She had probably been working in this building for fifteen years. That was what the lint-covered sweater and yellowed teeth seemed to suggest anyway.

“Just use it. We all know you’re in there, it’ll be fine,” the woman, somewhere in her mid-forties assured, stating it with an air of condescension, as though she was speaking to a small child who needed to be coddled but should also be old enough by now not to need such coddling.

Heaven, visibly bristled, gave the stall a try under the weight of the palpable pressure–attempting to work the lock that did not want to bother to do its job. She was practically frozen in place, exiting the stall after several more attempts to make the faulty lock work. As she leapt back out into the main waiting area in front of the Jack and Jill sink, she announced to no one and everyone in particular, “I don’t want to. I’m too weird about privacy.”

She then scuttled into the lefthand stall that suddenly opened up and spilled someone else out as a merciful protective means to shield her from the harsh rays of judgment as the Asian woman readily entered the defective stall without any hesitancy.

They both finished emptying their bladders at the same time, meeting one another’s gaze in the mirror as can happen when two people wash their hands in such close quarters. The Asian woman smirked even now at Heaven’s perceived skittishness over using the stall, prompting her to further explain, “I couldn’t do it, okay? People always tend to walk in on me in public bathrooms. I have a phobia.”

The others in the restroom looked at her as though she were an escaped mental patient, some early twenties wisp outrightly saying, “That’s crazy,” as Heaven exited the space in a rush, abruptly feeling all too exposed in this environment. She thought she had left this fear behind her when she left Miami, believed that with giving up the financial benefits of the drug trade to go on the straight and narrow that she might at least also give up being prey for those with some sort of underlying golden showers fetish. But no, it was a curse that would seem to plague her no matter what she did or where she went.

Coming to terms with this–that some mystifying series of events would always conspire to make her get walked in on in a bathroom–Heaven refused to relieve herself ever again, in any milieu, so scarred was she by the expectation of “getting caught.” Developing a painful UTI over this period, her bladder eventually burst and she died, the black abyss being the only place she might be able to finagle some privacy.