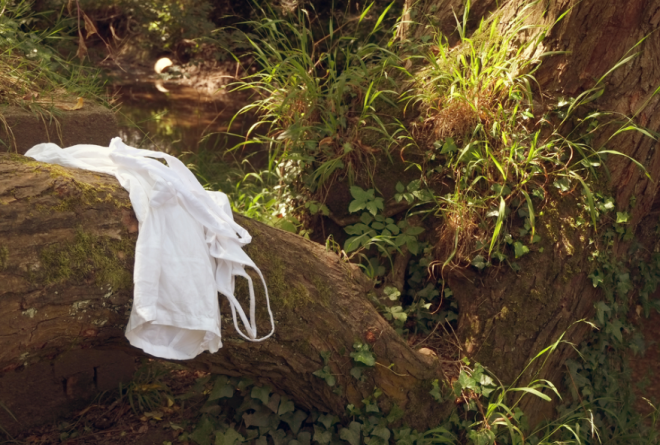 “Yep, that’s Ronnie all right,” the police officer confirmed as he looked upon the corpse of the once vibrant partier. The one who always ended up disrobing for no apparent reason by the end of it. And, yes, the only reason he could recognize what was left of his mangled body was because he had seen it in its nude state so often over the years. It was a small town, after all, and the same people consistently showed up to the parties thrown–usually by one couple in particular, Rob and Mary. The word was that Mary didn’t exactly live up to her name on the virginal front though, with many of Rob’s friends talking amongst themselves about how they’d each had a go at her, some multiple times, others mere one-offs.

The only person who never did seem to have his “turn” with her was Ronnie. It was for this reason that people in the neighborhood speculated he “playfully” took his clothes off by the end of every party solely in a puerile attempt to get her attention. To flash his wang like a monkey showboating for a potential mate–though even the display that monkeys put on came across as more sophisticated than how Ronnie acted. Poor portly Ronnie, who looked like one of the overly stuffed grape leaves on the appetizer table (Rob and Mary had a thing for Greek food, it was the party cuisine, as far as they were concerned). He didn’t seem to think so, perhaps, in his mind, envisioning that he was some sort of Adonis (again with the Greek motif) with a six-pack. If he could believe it, he could achieve it. Of course, he never did, and we all know that the saying mind over matter was invented to keep the middle class complacent in the hope that they could one day ascend to the next monetary tier.

Cyril, who was still just a police officer in training when he first started going to Rob and Mary’s parties, could see that Ronnie was a ticking time bomb. That something in his actions connoted more a sense of repressed rage than mere “playfulness.” His desperate desire for attention manifested in one of the most analog ways possible. Although Cyril thought it was primarily women who felt the need to show skin in order to get attention, whereas men simply got it naturally by “virtue” of being men. Ronnie, thus, seemed like a rare case to him. But then maybe his sexist views on what genitalia an exhibitionist ought to be packing was too well-suited for the Midwestern town in which they lived. He had often thought about branching out from it and moving to L.A., where crime was more interesting, but somewhere deep down he knew he wasn’t evolved enough for a place filled with what his father would call fags and niggers.

So he stuck to the “debauchery” of Rob and Mary’s parties–the height of “an event” in their Illinoisan town. Shit, there were even times when Murray, a bartender who moonlighted as a magician at kids’ birthdays, would put on a little magic show to really mix things up. Mary was always happy to volunteer for the part of “woman being sawed in half.” She had a masochistic air to her, that one. Maybe that’s why she endured Rob in between cheating on him. Rob was affable enough, sure, but it was an affability that stemmed from total blandness. The only time any sign of his personality shone through was when he became drunk enough to get irritable, taking his verbal aggression out on Mary in almost shocking ways to those who had never seen him get to that point of inebriation. But Mary was accustomed to it, and would scarcely bat an eyelash at comments like, “Clear the fucking bowl without breaking it, you dumb bitch! Do you think you can manage that?”

Maybe his unabated temper was a sign that he was aware of Mary’s constant infidelity, and could not suppress that awareness once the subconscious–as spurred by being wasted–was unleashed. Whatever the case, Mary was ostensibly nonplussed by his paroxysms. In truth, it rather seemed to titillate her. At least, far more than the sight of Ronnie pulling at his raw hot dog-colored penis. Unfortunately for Ronnie, there was one particular party where he came face to face with “Enraged Rob” just as he had found the so-called courage to, for the umpteenth time in this party’s history, remove his shirt and shorts. It sent Rob over the edge and, instead of taking his vitriol out on Mary, he lashed out at Ronnie by going over to the table to reach for a presumably arbitrary item and then proceeding to pelt him with empty pita pockets.

Mary emerged from inside of the house just as this was happening, looking disgusted with Rob’s childish comportment, to her somehow even more childish than Ronnie’s constant naked bravura. She sighed to herself and made a mental note to repay Ronnie for the suffering he was withstanding all because she hadn’t been in close enough proximity to take the heat from Rob.

Hence, it was at the following week’s party that, in an unprecedented move, Mary finally responded, after all these fêtes, to Ronnie’s requisite nudity, whispering something into his ear that prompted him to run toward the nearby lake. Minutes later, she, too, had disappeared, which Rob took almost instantaneous notice of. He seethed to Cyril, who had the misfortune of being close enough to him to be forced to engage, “Where the hell is my girlfriend?”

Cyril shrugged. “I haven’t seen her.”

Rob arched his brow. “Oh no? You’re one of the few men who haven’t seen her?”

Cyril bristled at the allusion, ruminating on how best to formulate a response without somehow offending. Mercifully, Rob thought he caught sight of her for a split second and flitted away. Alas, it was but another woman wearing a white dress.

Plagued by the lack of knowledge of her whereabouts, Rob instinctively ran into the thicket of trees that bordered their house, not to be seen or heard from for the rest of the night.

It was two days later that Cyril was summoned to the scene of Ronnie’s murder. And it was undoubtedly a murder, for no animal could have created such malicious stab wounds. Cyril thought of how Rob always carried a pocket knife on him, then, looking over at a flash of white he saw out of the corner of his eye, he noticed the same dress Mary had been wearing that night, now peppered with bloodstains. Cyril didn’t like the look of this one bit, and he certainly didn’t want to be the one responsible for ruining the town’s best-loved affair (no reference to Mary’s free-flowing fornication intended). So long as Mary was perchance alive, lingering somewhere in that pastoral scene turned macabre by Ronnie’s carcass, there was no reason he needed to throw Rob under the bus for his very overt crime. Who’s to say he wouldn’t have done the same thing in his place? Mary was an attractive woman, after all. And it must have driven Rob crazy to think of her with so many other people. But then, that was the tradeoff for being with a beautiful woman. That’s why Jimmy Soul sang, “If you wanna be happy for the rest of your life, never make a pretty woman your wife.” Of course, Mary wasn’t his wife. And from the looks of it, she might never be anybody’s. But Cyril couldn’t think of that now, instead faithfully searching for her amid the woods, praying the party wouldn’t stop.