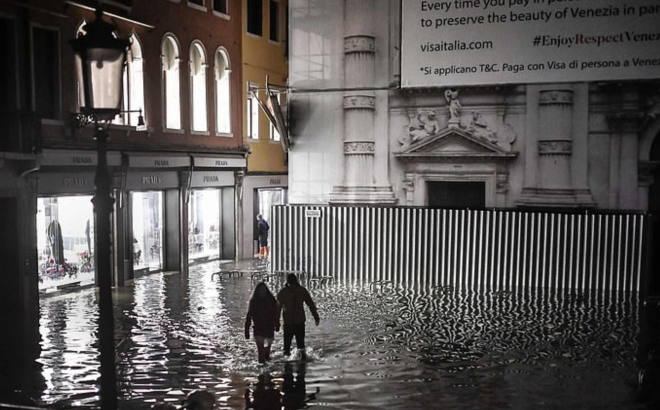 The floods came, inevitably, as they always did. But this time, it was different. This time, it was record-breaking. Which, of course, was saying something in a city like Venice, so accustomed to one storm surge outdoing the last, particularly in these climate change-centric times of the last few decades. The mayor, too, was only too eager to blame it on climate change, as though pointing a finger at something–some unbeatable monster–would somehow make it easier for the canal-drenched townspeople to endure the watery hell of it all. Dante never warned you that hell could be so watery.

Yet, like all things unexpectedly expected in Venice, it was harder for the tourists. The dainty, feeble little tourists who just wanted to pay a hundred-plus euros for the gondola ride that would allow them to re-create scenes from “Like A Virgin.” They had not accounted for this element of Venice life, though anyone who rides the waves into that town should come prepared to drown. Prepared to be whipped into submission by the lightning and the sewage green acqua alta that is anything but baptismal. It’s the risk that the honeymooning Venetos were willing to take. For how could Joseph Veneto not show his new wife some of the heritage he had only recently become proud of, when it served as a convenient reason to abscond from Britain before and if Brexit ever came to fruition? Yes, he wanted to move to the Veneto region, and Venice seemed the obvious starting point for getting a sample of the area. Jeanne wasn’t very decisive when it came to making plans for something as elaborate as a honeymoon, or even a wedding for that matter. That’s why Joseph had taken all matters into his own hands. And she didn’t seem averse to his hard-nosed dominance, even when she would meekly try to add an off-handed opinion like, “What about the Dolomites instead?” No, it had to be Venice, Joseph assured.

He was certain he could make contact with some of his distant relatives there, one of which turned out to be among the people who died during the six-foot surge of water. He was a second, maybe third uncle (to Italians, that still more than counted as a relation), electrocuted when the water flowed into his apartment. But that news wouldn’t come to him until they’d already been evacuated from the first floor of their historic hotel, the Gritti Palace. He cursed himself for agreeing to a primo piano accommodation in the first place as he, his new wife and a number of others in various states of dress were rushed to the top floors, fast looking more like a Neapolitan tenement than anything glamorous enough for Elizabeth Taylor to have been interested in. This was not the cultural reconnection he was hoping to achieve, nor was it dripping with the aura of romance that Jeanne secretly wanted but could never communicate thanks to her repressed English ways.

As they deigned to go downstairs, practically swimming to Piazza San Marco with the rest of the tourists still determined to make the most of their vacation, Jeanne could’ve sworn she saw a rat floating past her. She stifled a scream, closing her eyes and praying it would go away–having either floated farther downstream or perhaps being merely a figment of her imagination. Much to her relief, it had vanished when she opened her eyes again, only for that relief to be replaced with a new onset of panic as a wave overtook them and toppled her phone out of her hand. So much for documenting the apocalypse.

Throughout the blundering and bumbling, it amazed Jeanne that most of those around them could still remain in such awe of a place that was eroding away with the tide. Yet even despite this major flaw, tourists were determined to find the beauty in it, like the passengers dancing the night away on a sinking but oh so elegant Titanic. The corrosion of everything around her, however, was not something she could see past or through with the rose-colored lenses of videos and photos essentially mocking the end being nigh. Then again, what else could one do to while their time away in such a milieu? Certainly not take to the bar of the Gritti Palace where Ernest Hemingway himself once drank (one supposes that was either when Venice was much cheaper or he had made enough money off of writing back when it was possible to do so).

W. Somerset Maugham had also waxed of the hotel, “There are few things in life more pleasant than to sit on the terrace of the Gritti when the sun about to set bathes in lovely colour the Salute, which almost faces you.” The basilica in question was not bathed in any such lovely color, and there was no way in hell she was about to sit on the terrace as winds and rains pelted her body while the sea below continued to work on collapsing the building via abrasion. It was almost annoying to hear some Venetians talk of the ill-fated MOSE project, which she preferred to think of as the Moses project–for only a miracle from the likes of him could keep these deluges at bay. But to isolate the Venetian lagoon from tide surges of the Adriatic Sea had proved futile amid Italian bureaucracy and corruption. It was just another false promise in the vein of “till death do us part.” Which she was already well-aware Mr. Joseph Veneto had violated three times alone on the journey here with regard to his insatiable infidelity. First the flight attendant, then a woman on the train and then a woman at the train station. He thought she was oblivious, but she was aware. Hyper-aware of everything. That’s why she had to tune out. But this flood was something she couldn’t ignore. Not even someone as adept at minimizing crisis as she was.

“I’m going to go inside the church,” she announced, knowing that it was likely sealed off by now. Still, she wanted a reason to float away from him. So she did. Drifting dreamily past over-flooded bastions of couture like Prada and Céline. It’s funny how nothing matters when you’re underwater.