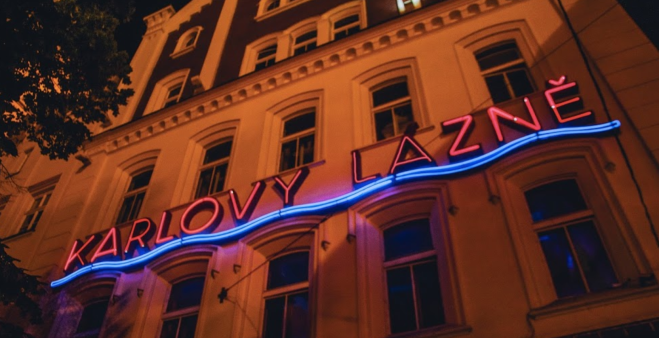 Another person wakes up in the alley of a nightclub in Prague and it is a new dawn. Or day. It’s fairly late by the time Barrett wakes up, and it takes him almost a full two minutes to put together where he is and what, in some fragmentation, actually happened last night. The club in question is Karlovy Lazne, a prime example of Europe’s somewhat sacrilegious penchant for converting ancient buildings into “modern” playgrounds. But then, what else is to be done with them? It’s not as though the youth generation is filled with reverence for their forebears. In this case, it is a fifteenth century building-cum-five floor dance orgy. He had arrived with a couple of single-serving friends from his hostel, fellow Brits who had told him that Karlovy Lazne was the place to go for the ideal ratio of birds to blokes. Barrett shrugged. He wasn’t really interested in women at the moment, but he was bored and the thought of trying to sleep in a loud hostel teeming with hormonally raging college-aged travelers seemed improbable and incongruous. So he joined. After all, part of the reason for his journey was to forget.

That he successfully did. Though flashes of the night came to him in waves as he walked along the Vltava River. He could distinctly remember kissing some blonde in the bathroom. The one he wasn’t supposed to be in and the one he’s fairly certain he got kicked in the balls for even attempting to enter. It would certainly explain his present groin agony. Unless some homeless person saw fit to kick him as retribution for all the other times he had been kicked while sleeping in an alley. He desperately wished he was back in England at the moment where the pubs opened at respectable hours like ten a.m. Here, no bar seemed to unlock its doors until six. The fucking Czechs, feigning not to be a nation of drunks. He continued stumbling his way down some path that only destiny seemed to comprehend the directions to, deciding eventually to amble into the Cafe Slavia. He slumped over in his chair after ordering coffee and a crepe, the contents of which were unknown to him–he simply pointed to one and hoped for the best. Staring at the surprising number of diners at this bizarre hour, he realizes the cafe is some sort of historic joint. The type of place where dissidents used to hang out back when there was such a thing as true dissidence. Oh, and apparently Rainer Maria Rilke was a regular, too. Go figure. You try to find some goddamn hair of the dog in Prague and you get some writerly trivia instead.

After fortifying his sobriety, therefore the potency of his hangover, Barrett endured on his slapdash pilgrimage back in the direction of the hostel, encountering a bookshop called K-A-V-K-A Book, a strange and sparse space, almost blinding in its whiteness. He didn’t really know why he had walked in. Like everything else about this trip, it had been an arbitrary decision, as though being led by some giant invisible fidgeting finger that flicked him about at random.

He noticed a girl buying a copy of Lolita while wearing heart-shaped sunglasses and wondered how many other versions of the book she might own already. Or maybe she had only seen the movie. Even better, perhaps she was buying a copy for her own aged lover to study. As he watched her caress the pages with the ginger touch of an old friend, she glanced over at him and sneered. A look that said, “How dare you interrupt my moment of worship?” Women and Nabokov. He would never understand it. Almost as unfathomable as their love of Bukowski. He shrugged and headed outside again, pausing to light one of his precious few remaining cigarettes from England. He didn’t like the taste of Czech ones, he decided, not agreeing with the concept that a brand is the same in every country. Exhaling a plume, he was startled by the appearance of the girl next to him demanding, “Can I have one?”

“Er…sure.” He took one out, leaving only two left for later. Dear god, how he despised women’s power over him. It was precisely the reason he was such a wreck. Such a destitute wreck, to boot. And though he was trying to forget all about Lara, here this girl was suddenly the spitting image of her without her heart-shaped sunglasses on.

She smiled but said nothing as she waited expectantly for him to light her up. Light up her life, fire up her loins. Struggling to fill the intimate silence as he leaned in to cover the area around the igniter, he asked, “So did you get it?”

She arched her brow. “What?”

There was another awkward silence between them before she finally said, “You don’t recognize me, do you?”

“I reckon not considering the state of you last night. But I usually like to believe my kiss is a little more memorable.”

The girl from the bathroom, of course. Barrett can feel the ground swallowing him up as he realizes that this is going to be his next gaping wound. Repeating cycle after cycle of going for a certain type. The “devil-may-care” sort who isn’t so much devil-may-care as doesn’t care about anyone except herself. “You,” he sputters. “Yes, I remember. It’s one of the few things I do, actually.”

She grins. “Then you’ll forgive me for having to knee you in such a cruel area. It’s simply that, well, you were getting too out of bounds. And you really shouldn’t have been in there.”

He almost wants to touch himself to comfort his aching balls in the midst of this bird who is all at once making them ache for an entirely different reason than the residual pain of last night. “I s’ppose that’s fair play,” he offers, not knowing what to do or say next. Does he let the giant invisible finger flick him into her cold arms and heart, or does he choose, this time, to fight it?

The answer comes a few hours later as he rolls over to grab one of his cigarettes again for a post-coital smoke. Still, hands down, the best kind of smoke. Yes, he is in her bed now, and the room is just what he expected–all shelves and shelves of books and framed prints of some of art’s more macabre paintings. The apartment is surprisingly large for someone her age, but he doesn’t feel obliged to make any inquiries about what it is she does for money. That could turn out to be a land mine should she confess to being a prostitute. Damn, there I go again assuming every woman interested in me is a whore.

She appears as removed as Lara was after every fuck session they had, rising from the bed and clinically staring at herself in the full-length mirror before putting on a robe and going into the kitchen to make a moka pot of coffee. “You want anything?” she calls from the other room.

Things, as usual, have suddenly taken a sharp turn for the grim. “I wouldn’t mind a coffee,” he hears a scratchy, German-sounding voice call back. Every particle of his being is screaming for him to flee. To just run out of the apartment without even bothering to put his pauper’s tatters back on anyway. Who gives a fig how cold it is right now? He’s obliged to listen to their brief domestic conversation as he slowly creeps out of the bed and tiptoes to the door to peer through the crack. The German-accented man is, just as he thought, of Humbert Humbert middle-age. Never fucking let a girl who reads Lolita pick you up at a book shop, he quickly apprehended was the moral of the story. Waiting for the moment when German Accent disappeared, he silently ran for the door whilst the Lara-lookalike’s back was turned. He never did catch her name come to think of it.

One positive element he could think of as he rolled up to the hostel in nothing more than his underwear was that Prague had turned out to be therapeutic indeed. For he had exorcised Lara out his own loins by falling prey to the temptation of the girl he would only remember as Lolita.