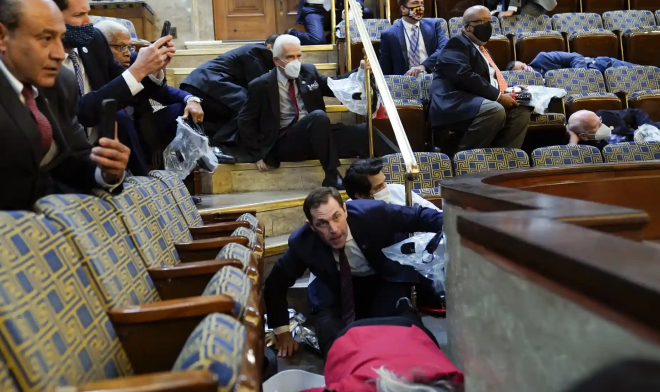 Everyone was quite “concerned.” That always seems to be the word one uses to express a distant glimmer of alarm while actually more involved in what and how something will affect them. In any case that’s what people were… about the members of Congress currently on lockdown together as the Capitol was besieged by slack-jawed goons convinced of the beneficence of their evil overlord. Of the one hundred members of the Senate and 435 House of Representatives, probably only a handful (at best) could tell you anything about how the common man lived. They were all bonded, despite their party lines, by a shared sense of privilege and power (and, as it goes without saying, income bracket). They never imagined any such overt missing links could feel the same way as they did–coursing with the adrenaline that comes with power–but it would prove that was the case on a historic day in January, when the U.S. would experience its first outright attempt at a coup.

The clientele was precisely what you would expect them to be. The sort of people who wear “coonskin caps” and have no qualms about waving the Confederate flag. It was somewhat comical that they should think their evil overlord actually shared any of their beliefs. Because their evil overlord had no real policy, other than being a staunch proponent of himself. In fact, he would have preferred that any flag being waved simply featured his face instead of his name. He did so love to look at it, hideous though it was no matter what your brand of “taste” in one’s physical appearance. While it is so often the case that “beautiful people” are quite ugly on the inside, in his case, the ugliness of his shell was a near perfect reflection of his interior character. The supporters that had listened to him when he said to “stand back and stand by” could not see that. It was unclear what they could see, other than red. The color of blood, the color of Republicanism. The color of blind rage for no reason other than you need to channel your aggression into something.

The Senate, which, like the House of Lords, viewed itself as the superior entity, was, for once, genuinely shocked and horrified. Possibly more than those in the House of Reps, further down at heel and more obliged to “interface” with the commoners on a regular basis. Of the fifty-one Republicans and forty-six Democrats (no one much cared about the two rogue Independents, or the empty slot still not yet filled), all but two were forced to join together in a room where they placed their gas masks (which looked like the sort of thing you put on your head when you want to be sure to asphyxiate yourself) on with a sense of duty they seemed to take more seriously than the job itself. Funny how serious people are when it’s suddenly their lives hanging in the balance.

Trapped together in a room for the first time without any hope of respite from one another, those on the outside looking in might have been most “concerned” of all not for these Congress members’ safety from the insane missing links parading outside their door, but for the inherent tension between those with such a chasm of a political divide. One that had only been stoked over the past four years to the point that most politicians could only agree on one thing: they did not want to discuss politics with anyone who did not share their views. So it is that we’ve been led to the state we’re in today. Where divergent discourse of any kind results in being deemed either a pinko or a fat cat fascist. Neither assessment is ideal, though it seems most have decided it’s better to be dubbed a “pinko.”

Everyone was most concerned of all about Mitch and Nancy. The two couldn’t be expected to agree on a takeout order, let alone a course of action for the future of the nation. They had been locked into their own private room together, away from the lowly Congress members stuck on the second floor, where they had tried to go about the business of certifying the new president-elect. It was Mitch and Nancy who were ushered to the fourth floor, in a machinery room where they were told to crouch down and hide behind a relic of a fax machine. One that seemed to be the size of the original models of the 1960s. Poetically, Mitch and Nancy, too, were original models of the 1960s, and both had seemed to ignore that, as time wore on, they couldn’t very well side-step those ravages for much longer. Nancy herself had only narrowly just been reelected, and it was clear that this would be her last hurrah as one of Washington’s most major power players. She never, in a million years, would have dreamed of telling Mitch any of these fears, but as the hours dragged on, and they continued to hear shots firing (after a while, they couldn’t keep up with the news, as neither of their phones were getting any reception), they couldn’t help but grow closer as they dispensed with their veneers (and we’re not just talking teeth-wise).

Perhaps they should have been more “concerned.” You know, for the health and well-being of their colleagues–and, to boot, the health and well-being of democracy. But they were not. Something was happening between them. They were beginning to finally understand just how similar they fundamentally were. How much they truly had in common. And as one thing led to another, well, they found themselves engaging in a bit of geriatric porn. It can be called such because there is, in fact, a surveillance camera in the machinery room. When they were finished, both buttoning up their suit jackets shyly, they couldn’t avoid each other’s eyes for very long before staring right into them and being compelled to go at it all over again. Who knew all this pent up rage just needed a bit of fuck therapy to work it all out? And while all hell was breaking loose outside, both parties (and party members) had to admit that it seemed to be divine intervention. A means to force them together into a room alone for an extended period of time in order that they might “better understand” one another (and their bodies–because, naturally, when the clothes came off on either, it got even more sci-fi–and goddamn! The bruises on Mitch’s torso certainly told some kind of story, almost like the cave drawings in Lascaux).

As a full twenty-four hours passed, they actually realized that all the noise had stopped. It was quiet as a monastery. And, now that it was all over, it sort of was a reliquary… to democracy. Mitch and Nancy didn’t really seem to mind or care, having at last comprehended that all this time, they were the best of friends. Even if it was only behind closed doors and for the sake of banging out their contention. Among the rubble and debris, complete with corpses of the Senate and House, they could see that the evil overlord had been strung up by someone who had obviously turned against him. Like Mussolini or Hussein, he had been hanged (granted, Mussolini was shot to death first before being displayed upside down in a public square). Mitch turned to Nancy and said, “Guess it’s just the two of us as usual.”

Nancy returned, “Do you want to order some takeout?”

“Oh for Chrissakes, you think I wanna eat any of that chink shit?”

And just like that, they had all at once forgotten their friendship.