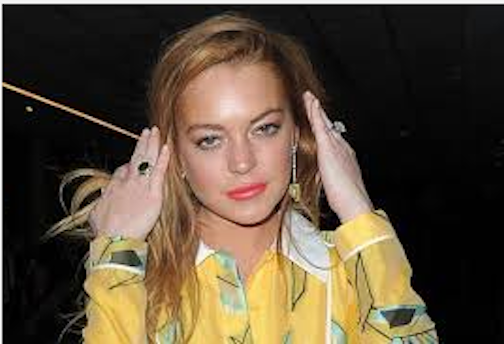 There’s not much a girl can count on these days. Certainly not fidelity, monogamy or something so quaint as, goodness me, le mariage. And with Lindsay Lohan’s romantic European spiral in full gear ever since randomly drying out on the Greek islands and finding herself with Russian quote unquote rich boy Egor Tarabasov (it’s neither here nor there that he’s seven years her junior), there’s been a real black pall over her love life.

One could say it all started after she foolishly stopped being a lesbian with Samantha Ronson. Or maybe it was more around the time her celebrity sex list “leaked” (or was strategically placed in the trash) and the rampant fear of STDs was re-instilled in any famous man still contemplating romancing her. But pinpointing her Beatrix Kiddo swerve off the road is no matter now.

All one can do is look to the severed ring finger the nearby Greek gods wanted to detach. You’ll notice Paris Hilton in Ibiza is too far away for them to inflict much pain on her, proving, once again, just how secretly shrewd she is. In any case, it was probably Aphrodite at the helm of the decision, who has never been very tolerant of bad plastic surgery. Sure, she has respect for looking good at any price, but only so long as the outcome appears natural–more beautiful than before.

From Greece to Turkey (after going to Syria to engage in a bit of humanitarian action), Lohan couldn’t help but partake of a bit of mental cleansing–refugees can be so icky, after all. And trying to do things on her own has never been easy, which is why she was attempting to empower herself by anchoring the luxury boat without assistance. Well, the gods have no room for empowerment when it’s coming from a mortal who takes lavish vacations for a living. And so, Aphrodite severed the finger as punishment. She also hadn’t taken kindly to Lohan’s comment about Tarabasov, “I realize now you can’t stay in a relationship just for love. No woman can be hit and stay with that person if that person isn’t prepared to say sorry.”

Not only did she make a mockery of everything Aphrodite represents by denouncing l’amour, she also made a mockery of women by stating that, as long as a man apologizes, he can do whatever he wants. Kerplunk. Down went half of Lohan’s finger into the sea, more ready to flee from its owner than the hope diamond. But, miraculously, Lohan still has enough friends/handlers to have retrieved the precious digit so that it could be reattached.

Alas, there will always be that subtle scar, that little trace of where her finger is split–indicating a sort of marital deformity. “Women over thirty aren’t fit to be wed,” snickered Aphrodite to Artemis. Artemis rolled her eyes and went back to being ultra macho with her hunting and delivering of babies.

Will Lindsay Lohan’s left ring finger sate Aphrodite, or will she go after the one on her right hand now, too? It’s too soon to say, but Aphrodite has been known to reveal bursts of hate betwixt her beams of love (also, incidentally, how she refers to penises).