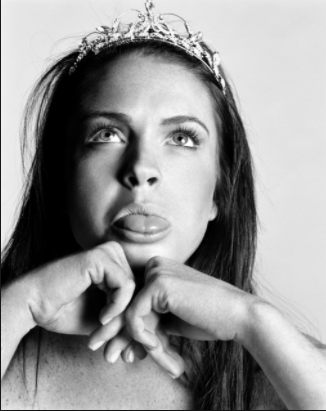 In Italian, the word “lingua” means both language and tongue. It is one of the few perfect dual purpose, double entendre words in existence. For Lindsay Lohan, currently studying, according to her assertions, among other languages, Italian, Turkish and Arabic, she has simply taken to the natural resulting nonsensical accent that stems from being so multilingual.

But there is a secret that only her Dorota-like handler, Patricia, knows. As she has watched Lindsay’s gradual transformation from Long Island mall slut to “global citizen” and refugee humanitarian, Patricia has had to confess to only one person in her life–her fiancé, Bonwith–the real cause behind Lindsay’s accent.

Secreting away from the daily more unrecognizable former film star, Patricia arranged to meet Bonwith, a 35-year-old high-ranking member of British Parliament at Le Boudin Blanc in Mayfair to discuss the recent turn of events in Lindsay’s life–mainly her public display of the accent heard ’round the world.

Bonwith, determined to order a glass of wine before hearing about any of the latest shenanigans Lindsay had subjected his future wife to, opened with, “I haven’t seen you in an age Patricia. Do let’s fuck tonight.”

Patricia, who had only fallen in with a British man due to having to follow her employer to the West End in 2014 for her performance as Karen in Speed-the-Plow (Madonna was much better on Broadway), was still unaccustomed to how absurd British seduction sounded.

Nonetheless, she pretended the turn of phrase “Do let’s fuck” wasn’t ridiculous and responded, “Yeah, okay. Sure.”

The 22-year-old waiter, Blaize, approached their table and said in his own possibly fake, French-tinged accent, “May I offair sahmteeng far yoo tu dreenk?”

Blaize nodded acquiescently and sauntered away. It was in this moment that Patricia took the opportunity to sigh heavily and confess, “Lindsay has been possessed by Donatella Versace, who has been taking classes in astral projection to apply a witchy motif to her spring 2017 collection. She wanted to meet up with Lindsay for a party in Greece but instead accidentally got stuck in Lindsay’s body, altering the sound and intonation of her voice.”

Bonwith nodded in understanding. “Oh Patricia, darling, that’s easily fixable. I have a friend in the dark arts who helped Madonna get rid of her British accent a few years ago. Goodness, when you think about it Lindsay and Madonna really do have a lot in common.”

Patricia bit her lip as Blaize returned with the bottle of wine. The last thing she needed was any of this information leaking to the media, already literally lusting after the blood left behind by Lindsay’s ring finger.

Bonwith swirled the wine before sipping it, an act so drenched with artifice it made Patricia want to give him back his wedding ring and leave the restaurant.

Patricia rolled her eyes as Blaize, probably clandestinely American, walked away. She was starting to despise Europe. In truth it was filled with nothing but people with fake accents and false impressions of sophistication. It was no wonder Lindsay fell victim to such an incredible plight. She wanted so badly to fit in, to escape from the cruel judgments of the synecdoche of Hollywood through an international reinvention.

It was no wonder Donatella’s astral spirit honed in on this level of vulnerability. In any case, Patricia would have to endure Bonwith a bit longer to procure the name of Sasha Duvret, a 43-year-old mystic specializing in spirit ejection.

Though it was difficult to get Lindsay to leave Istanbul for a day, Patricia managed to coerce her to come to an unseen portal on Marlybone High Street for the removal of Donatella’s essence, which had been flickering in and out so inconsistently it made Lindsay sound little more authentic than Miss Cleo. And, as a result, Lindsay’s nerves were a bit more fragile than usual, her use of the Kathryn Merteuil-inspired coke necklace she bought from Etsy for $79 in particularly frequent use that day.

As Patricia and Lindsay entered the portal, they were greeted by Sasha, who promised, “We will expel this Italian plague from your body.”

Hours later, Donatella was still half in, half out of Lindsay’s body. The former seemed very apologetic though, promising, “O dio mio, Leenzee, I promeese I weel geev yu a lyfetyme of Versace deesyns for freeee!”

Lindsay wasn’t having it. “I’m more into Dolce and Gabbana. They may be self-hating gays, but whatever.”

Sasha was growing very impatient with the entire affair, insisting, “Donatella has a very weighty spirit. It’s making it more difficult for me to expel her.”

Patricia pleaded, “We can pay you whatever you need to get rid of it. Just please do it.”

But Lindsay tossed her hands up in the air and said, “Just leave her in there. I’m a motherfucking citizen of the world now and this is the accent I should have.”

Patricia shook her head and insisted, “But Lindsay, you have to go back to America at some point. We should really put your voice right for your next movie.”

“Unless it’s a fucking Pedro Almodóvar vehicle, I’m not doing anything. So it doesn’t matter. Now just leave me alone Patricia!”

Lindsay stalked out of the portal, Donatella’s essence still hovering over her.

In short, if Lindsay was going to stay abroad, she might as well adopt the ultimate in Eurotrash reconaissance, part of which depended upon sustaining half of Donatella’s accent.