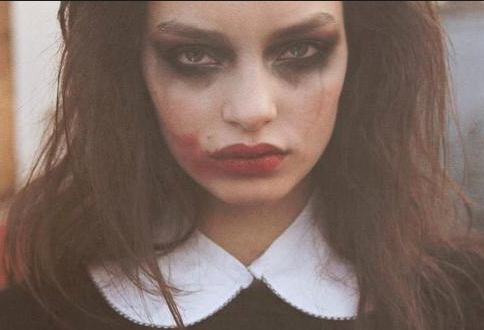 I will not doom myself to repeat the same mistakes, to engage in the same behavior, Hazel insists to herself as she prepares her face for the night at hand. Like Amy Winehouse, the length and thickness of her eye makeup is intended as some sort of subconscious armor that declares, Look at me, don’t look at me. On the one hand, she wants to be noticed, just like any girl. But on the other, she knows any engagement with someone at the setting of a bar or party is completely meaningless and will result in nothing other than awkward sex during which the guy will probably say something vagina-drying like, “Yeah you’re a good little girl.”

She will stand there playing the frumpy friend, though it’s not necessarily that she’s frumpy (but brown hair and a beige wardrobe palette do not help) so much as weird and not for conventional flirtation. At first, she’ll try to engage, to “act normal,” but it will become so tedious to her that she ultimately decides to just shut down, go in the bathroom and start taking pictures or making videos of herself. This seems far more interesting and entertaining somehow than asking people what they do for a living or where they’re originally from. Like Lexi Featherston, she feels bored to the point of death.

There was a time when Hazel got out, was close to staying out. It was about five years ago now, when she was twenty-nine and acknowledging to herself that maybe New York really was an adult playground only intended for those in their twenties, those still youthful enough to endure the lack of dignity often caused by a financial ebb and flow. Her boyfriend, Xavier (as in Dolan, not Cugat–ethnic pronunciation-wise), felt the similar push to leave, and was, in fact, the one that galvanized them both to depart at the end of the summer of 2012. She was nervous and slightly hesitant at first, but once they returned to his hometown of Marseille, she suddenly felt a great weight lifted from her shoulders. She was Atlas and had shrugged. That is, until a new and perhaps worse kind of weight shifted onto her, one that she should have foreseen before, but, amid the rekindled amorous haze of moving to France with Xavier, she failed to take into account how grating it would be to live in an attached home next to Xavier’s mother’s. Though the location was prime–right near the Old Port–nothing could compensate for Madame Auguste’s constant meandering into Hazel’s kitchen, determined to ensure that she was feeding Xavier properly. She didn’t have the heart to tell Madame that, in the entire four years they had been together, she had never once made Xavier a meal. Now, however, she felt almost guilty about having so much free time in the day while Xavier went to work at his father’s shipbuilding company–she herself would have to wait to find employment until procuring a legitimate visa or, hoping against hope, that Xavier would actually ask to marry her.

Maybe I should learn to cook, the chastened aspect of her conscience told itself. But an attempt at making custard tart pie one day in November cured her of any desire. She had started the prep work in the morning, just as Xavier left. She didn’t want to tell him what she was doing for fear that he might make fun of her or perhaps knew somewhere in the back of her mind that she oughtn’t get his hopes up about it. Least of all did she feel inclined to inform Madame Auguste, who of course managed to find out about it anyway when she “just happened” to “pop her head in” to see if Hazel “needed anything.”

“Oh my, what are you making here?”

“Custard tart pie,” Hazel declared with more pride than she had a right to.

“It’s not the season for that, but…do you need help?”

“No, no. I’ll be perfectly fine to make it myself,” Hazel said dismissively. You had to be dismissive with boyfriends’ mothers to get them to leave you alone. Just look at what happened to Gwyneth Paltrow in Hush. She might never have gone through eating a pitocin-laced cake if she had been more dismissive of Jessica Lange.

Clearly vexed but not interested in pushing the matter any further, Madame Auguste excused herself, claiming she had to go to the market anyway. Hazel knew full well she didn’t have any such errand to run, but that she was so determined to put on airs of importance and relevance that she would say anything to make her own self believe it were true.

As the morning moved on at a steady clip, Hazel felt almost arrogant in her abilities as a baker. It was at the point of using the correct ratio of egg yolks to milk for the custard that things began to go south. Forgetting that she had left some butter simmering in a pan on the stove that was now sending plumes of smoke throughout the entire kitchen, she suddenly let too much milk pour into the bowl as she set it down to turn the burner off. Luckily, Marseille wasn’t the type of town to enforce the use of smoke detectors (one of the primary benefits of Europe remained its laxity), allowing her to easily air out the vicinity with a slew of towels before anyone–especially Madame Auguste–could be the wiser. Persisting with her endeavor, she went about the rest of the steps with methodical determination, but her confidence was shaken from the faux pas and by the time she took the final product out of the oven, it resembled nondescriptly colored mush more than anything else. It was precisely at the moment she had taken it out that Xavier came home, a smirk appearing on his face immediately upon seeing her in a domestic pose.

“Mother warned me you might be trying to cook.” He walked over to the pie and prodded at it with his finger. He laughed and said, “It’s okay, we’ll get seafood tonight. Mother and Father already suggested it knowing you might have this difficulty.” He patted her on the back superciliously and it was with this gesture that she knew she would be unable to stay here with him–and them.

So she left Marseille, knowing that Xavier would always choose his parents–particularly his mother–over her. How could she live a life like that, constantly pitted as the villain destined to lose? No matter what she did or how she acted, Madame Auguste would never cease to find fault with her, and gradually, her influence would affect Xavier’s own lessening view of her. It was thus that she packed her bags once again to go back to New York, commence again in the same hackneyed field of “lifestyle” journalism.

Finishing her reminiscence to the time when she had almost managed to avoid this type of existence where bathroom photography prevailed, Hazel left the party early and without saying anything to anyone of her departure. Out on the street, she was complimented for her looks by someone expectedly foul. It was because she was crying, and this, without fail, tended to attract a certain kind of man, the kind ready to pounce on vulnerability and use it to his advantage. She tried to sustain her silence through her walk home, but the sobs started welling up to the surface again. This was roughly the eighth time in a month that she had sobbed on the way home, thinking about Xavier and her chance to escape from this town for good. And yet how the brief out she had was only another form of prison, that there were cages no matter where she went. Sobbing was just a passive form of trying to rattle the bars.