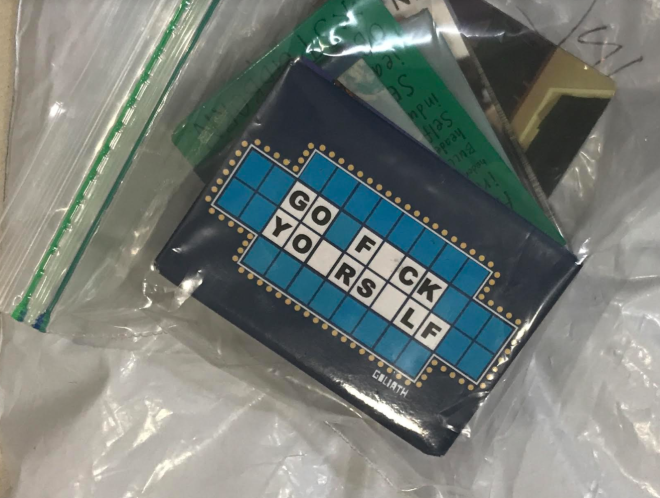 For some reason, his name was Sparky. It was, perhaps originally, a loving epithet designed to warn anyone first meeting him that he was rather lively, to put it mildly. To Harper, a 27-year-old in desperate need of a place to live upon her return to New York after a four-month sabbatical, he became the gay boy posing as a full-fledged man in an “adult’s” apartment who had a strange and bizarre aversion to magnets. It was something none of his revolving door of roommates could have possibly known or anticipated. Though it was somewhat in keeping with the ironic sense of humor of the universe that most of the roommates he did end up hating tended to possess an almost abnormal collection of kitschy and cheeky refrigerator-ready pieces.

Harper was the latest to move in, filling the space that Avery had left behind in his, according to Sparky, “hasty” decision to move in with his girlfriend, thereby breaking the lease that he had agreed to honor for a full year with both Sparky and a third, rather bland roommate named Caroline, who was frequently gone at her correspondingly bland administrative assistant job and therefore ideal for someone as possessive and roost-running as Sparky.

The unsettling thing about Sparky–among many unsettling things–was that he tended to lure roommates in with his “generosity” and “positive vibes,” only to inevitably turn sour on them just as rapidly. In his urgency to get someone he at least vaguely knew and could therefore potentially control, he cast his net out to the few friends he had managed to sustain for over six months, the primary one being Kara, who had essentially pulled him out of the gin bottle he had of late crawled to the bottom of and landed him a job at her law firm as a paralegal. It was also Kara that directed him to Harper, who had briefly worked at her firm as well via a temp agency. That someone as high-powered as Kara could be friends with someone as languid and faux motivated as Sparky was indicative of her need for a heavy rotation of drinking partners. It was the nature of being stressed by the law, and the desire to have a robust arsenal of people to turn to in times of wanting to commiserate freely and with the ability to say things that one might not necessarily want the other person to remember. Sparky was really quite perfect for that. He was even known to get so blackout wasted that he would disrobe and dance in the street. Oh, Kara had many a video of those performances to use against him if the mood ever struck her. And it just might after how it all ended up playing out between him and Harper, a roommate so rarely there that for Sparky to randomly have a mood swing and ask for more money for utilities that she didn’t drain on a minutely basis the way he did was not only unconscionable, but completely out of left field. Maybe it had to do with Sparky’s mother finally deciding to cut him off, cease paying his many and vast credit card bills. Although he was nearing thirty, it seemed his 50-year-old mother, Cathy, little minded subsidizing his life in spite of how rudely he treated her, regularly calling her a “dumb bitch,” as was his misogynistic gay way. But maybe Cathy had finally decided she didn’t want to bankroll such a thankless monster anymore, regardless of whether or not she had created it. This could really be the only reason for the abruptness with which Sparky insisted upon not just $50, but $100 more as recompense for the supposed lack Harper was infecting his precious apartment with. Such a severe increment not only spoke to the level of his propensity toward emotional about-faces, but also his out-of-touchness with reality. One supposes when you’re allowed the luxury of “working from home” a.k.a. occasionally submitting paperwork and smoking weed all day, a sense of derangement is bound to creep in. But Harper wasn’t aware just how much it had crept in, even in spite of Sparky’s boyfriend moving in a few months ago to supposedly help offset the costs that he was now demanding from her and Caroline. Caroline, who, in her own quiet way, wielded more clout than anyone in the apartment (but would only wield it when situations like Sparky calling for more money from all sides arose) firmly put her foot down in saying no. Which is perhaps why Sparky turned all his vitriol toward Harper, not on the lease and not as catering to being social with him as Caroline. In point of fact, Harper loathed interactions with him. He was loud and talked often and of nothing. It was more about hearing the sound of his voice for Sparky than anything else. And oh, how grating it was to all else but him, iterating, once again, his lack of consideration for anyone but himself under the guise of pretending to care about everyone else so much. Even his meathead boyfriend was someone he only kept around as an accessory, as a way to say, “Hey, someone is willing to be with me, so I must not be totally batshit crazy.” Having Johnny–that was his meathead-appropriate name–as someone to vouch for his sanity by being in a relationship with him was the primary purpose for keeping him around, as far as Sparky was concerned.

But even Johnny seemed to look rather weary after too many months spent living with Sparky. It certainly upped his cocaine intake, that’s for sure. And the more he snorted, the more money he didn’t have. And if there’s anything Sparky abhorred, it was what he hypocritically called broke asses. For you see, none of Sparky’s fake credit card money was even his own. He didn’t have the sense of adulthood he prattled on about when it was convenient to take ownership of his debt, the weaselly little piece of shit. Where this aspect of his personality fit in with his disdain for magnetic squares with witty sayings and imagery on them, Harper still couldn’t gauge.

Indeed, Harper was always very cautious–overly mindful–of “imposing” her presence into the apartment. It took her a full six months to even deign to ask if she could put her since-retrieved-from-her-parents’-house box of magnets on the refrigerator. Sparky bristled at first, telling her about how the last roommate put up an array of magnets that didn’t fit in with his “aesthetic,” which, as far as she could tell, was “out-of-style preppy” trying to mask his Southern white trash roots. You know, cheesy framed pictures of famous New York landmarks here, “May the bridges I burn light the way” coasters there. Yet he was so proud of his “home,” which only felt that way to him, and tended to make everyone else who entered it feel more like an intruder.

And that’s just what Harper experienced in one final exchange with Sparky informing her that if she wasn’t willing to pay the $100 more in rent he “requested,” then she could feel free to get the fuck out as she “didn’t have a leg to stand on” in defending her explanation for not wanting to cough it up. “Coughing it up” is exactly what she would have to do, too, to give him that level of extra money, as she was already shaving off proverbial pounds of her flesh every month to get him what he was asking for in exchange for her to be able to put a mattress on the ground and never sleep there. So when she was essentially forced to leave far ahead of the end date she had committed to (she said she would stay until February and was summarily kicked to the curb in June), she did so with swiftness, Sparky coming across as so unhinged that he might even toss all her possessions out the window in an Adderall-infused fury before she could remove them.

But remove them she did, and fifteen days in advance of the date she had paid up to. And, as she walked past Sparky, forever perched on the couch watching bad TV and smoking weed, upon entering for one of the last times, she scuttled to her room to find that he had strategically gathered all the magnets from the refrigerator, placed them into a plastic bag and deliberately put the one that said, in Wheel of Fortune-inspired glory, “GO FUCK YOURSELF,” on top. Yes, he was a psychopath to be sure–made all the more evident by his unusual distaste for magnets. There isn’t even a word for someone with a phobia of magnets in existence, no classification in the DSM. Maybe this was further proof of just how indeterminately out of his gourd Sparky was.

Not one to be one-upped, Harper knew that the only revenge she could take upon Sparky for his erraticness–apart from ruining his prized walls as she removed all the posters and paintings she had put up in her room–was to leave him a special gift on her way out: the GO FUCK YOURSELF magnet, right there, smack dab in the middle of the otherwise blank canvas of a fridge. Yeah, he was going to need to smoke a lot of weed and snort a lot of Adderall after that to cope. And who can say but the inanimate eyes of the refrigerator, but he might even heed the magnet’s advice and masturbate–God knows he wasn’t getting enough of a sexual release from Johnny’s coke dick, which was probably too flaccid to give Sparky’s too-tight asshole enough pleasure anyway.