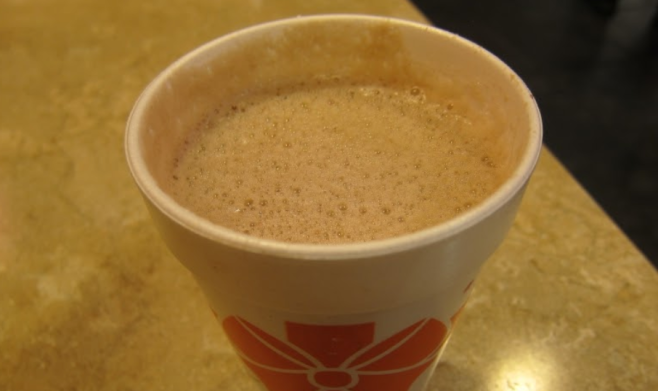 The most uncommon and disgusting thing a person can order at this or any movie theater is not Raisinets, but hot chocolate. And yet, I loved her even in spite of this extremely offputting and repugnant twice a week order. For that’s how often she would come, diligent in her desire to see absolutely every film we had in the can(s). I suppose that’s what made me fall in love with her, at first. This dogged and anachronistic commitment to the cinema. It was so unique–so impossible to come by in another human being. So I ignored my natural instinct to express visual nauseation over her now standard request, instead consciously replacing my grimace with a smile. One that she chose always to look away from, as though wanting to make very sure she would never be mistaken for paying me even the slightest non-business transaction oriented attention. And indeed, I never did get any sort of impression that she had an interest in me, other than hot chocolate made of water and powder that I put an especial effort into not making taste like shit by keeping a stash of Reddi Whip I had purchased just for her about two weeks after she had started showing up. I prayed she wouldn’t make a remark about how the so-called “formula” had changed. She didn’t. It was as though this is how she genuinely expected movie theater hot chocolate to be–this lavish. It was in keeping with her old soul naïveté regarding the “cinema experience.” What it was supposed mean to “see a picture.” I could empathize.

False expectations of the moviegoing experience were what led me to pursue this job above all others as a means to placate my parents as they paid for me to major in screenwriting at Tisch. At first, they seemed content to let me loll about on their progenitorial backing. After the first year, however, it became apparent to Tamara and Agustin that their only son had developed a fairly expensive cocaine and marijuana habit as a result of too much free time on my hands–the parties and the inane pursuit of women all led me down the effortless path of destruction. Agustin was the one who had first made the discovery when I came home that inaugural Thanksgiving since spending those few precious months away from them and the odious town that is Great Barrington, flocked to at all seasons of the year for its close proximity to the Berkshires. If my altered, sickly appearance wasn’t a giveaway, then surely the maid would find one of my stashes and report back to them regardless of the loyalty I thought they had felt toward me as an adolescent. I hadn’t wanted to go home. Would have preferred to stay alone in the apartment near Grand Street they had rented for me after I told them it would help with achieving “optimal focus.” But you tend to come when called if you don’t want to be accused of biting the hand that feeds you. So I went.

It only took a couple of days for Agustin to unearth what I thought was my well-hidden supply that, in my mind, I had so shrewdly concealed in the glove compartment of my gently used silver BMW. But Agustin “just happened” to be searching for something in there when he came across one of my bags of coke (I really should have brought more weed on that trip for calming purposes). Needless to say, the river of shit I received at all subsequent family dinners of the trip thereafter eventually led to the “compromise” that if I got a job and submitted to monthly drug tests, they wouldn’t cut me off. So I complied. And now here I am, waiting each day for her arrival. For her to show some sign of caring for me in even vaguely the same way.

Because my first introduction to her began in the cold months, it took me awhile to notice certain things about her. Was she pale all year round, or did she tan in the summer? What did she look like without a beanie on? Was she thin or curvaceous underneath all those layers? Gradually, I came to unearth–physically–who she really was. And that she ordered hot chocolates even in the spring. It rather endeared her to me all the more.

Thus far, however, we hadn’t made much progress, conversationally. Until one day when she stabbed me in the heart by showing up with some dweebish fellow in black-rimmed glasses and an ascot. An ascot. I wanted to climb over the counter and punch him out right then and there. Yet I calmed myself, self-soothing with the thought that maybe it was just a friend or a gay man. This consolation was negated when he at once took her by the hand as they approached the counter.

She blushed at my direct eye contact and callout.

The dweeb, feeling himself somehow superior to me, retorted, “Dude, it’s fucking seventy degrees outside. Why would we want a hot chocolate?”

I continued to stare at her, expecting her to explain to him that this was her preference, her essential movie viewing companion: a foul hot chocolate with Reddi Whip that I had personally kept her in supply of out of my own pocket. But she said nothing. The little ingrate was too ashamed of admitting to all those instances prior when she had freely entreated, “A small hot chocolate.” How could she possibly want to watch a masterpiece with this buffoon that she couldn’t even be herself around? Who ordered for her as though this was 1993 or something?

The dweeb was losing patience with me as he looked from my gaping expression to the girl whose name I still didn’t know because she always paid in cash.

“Hello? Can you take our order please?” he demanded with a whining lilt that was on the verge of inciting me to pick him up by the testicles and throw him against the wall. Alternatively, I swallowed my errant spit and pride and said, “Of course, sir,” turning around to face the popcorn machine like a robot, making mechanical movements in accordance with what I forced myself to feel over this slight: nothing. All those months of lusting and caring on the cutting room floor of my self-projected fantasies. I poured the drinks (and crushed the flowers a.k.a. discreetly laced the dweeb’s cup with some salvia I had on hand–Mom and Dad had grown a bit lax about monitoring me of late). When I finished preparing the order, taking a light gamble on ensuring that the dweeb would go for the drink I wanted him to, I smiled the smile of someone with a wire coat hanger stuck in his mouth. “Here you go, sir. Do enjoy the movie.” The dweeb regarded me with a countenance demarcating pity, but he would soon be the pitiable one, about thirty minutes into the feature no doubt. And I’d be waiting, after he ran out and she, too, decided she might as well pack it in after attempting to “chase” him and see if he was all right. But women never deign to run in moments of crisis. It shatters some sort of myth about their aloofness.

Timed to perfection (maybe watching all those spy movies of late hadn’t been for nought), I saw her exit the theater as I exhaled a plume from my Camel Light. Seeing that the dweeb had gotten too far out of her reach by this juncture, she blinked at me, not necessarily intrigued, but not totally disinterested either. “What’s your favorite movie?” I asked her, smoking my cigarette in a manner I imagined to be as suave as Cary Grant or Gregory Peck. After so much time wasted and realizing that someone else could swoop her up just like that, I decided it was long overdue to get to the point.

I tossed my cigarette on the ground, stubbing it out at the same time as my feelings. I could never love a girl who gave such an answer as that to one of the most important questions in life and in determining compatibility. Plus, the girl drank movie theater hot chocolate. What a fucking freak.