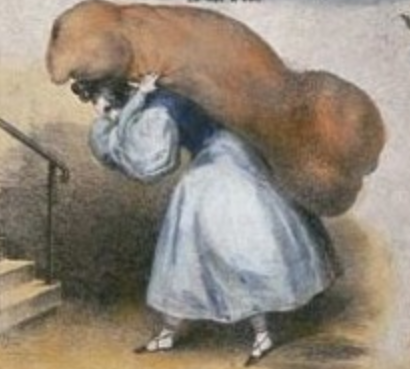 It began, fittingly, the year The Pinkprint came out. 2014. Alise played it on repeat as she drove up the coast ahead of the Christmas rush to help her parents with their usual preparations in putting on an over the top dinner for Xmas Eve. Alise found it to be nothing more than yet another symbol of their faux upper class decadence (though they were middle through and through), but she couldn’t turn down an opportunity to leave Regan behind just a little bit earlier. Regan, who, evidently after just under six months spent living in the same apartment, had taken to rather overtly masturbating in front of her as she sat in her desk chair trying to ignore the fact that it was happening at all, a near impossible feat when considering both the close quarters and the signature sound of a hand rubbing against penis skin–the inimitable wank wank wank made all the more obvious by him trying to be “discreet” about it underneath the covers.

At first, she did her best to blame herself, figuring that he probably wouldn’t be so lecherous of late (even if he always had been) were it not for her constant lack of desire, amounting to “withholding.” But the thought of body to body contact–with anyone, not just Regan–sounded more repugnant to her than being trapped in a room with Hitler. She could trace the moment of her sudden, let’s call it, “loss of appetite” to her current profession. Or rather, the profession she was training for: psychologist. Having to put all the time in as a “volunteer,” which she essentially was for nine dollars an hour. And because the state of California seemed all too aware of the average aspiring psychologist’s desperation to complete their requisite hours, all they could see fit to have available in spades for “volunteers” was work in nonprofit counseling organizations specializing in domestic abuse cases.

The women Alise counseled were battered, bruised and laden with the unmistakable trauma of someone forced to perform sexual acts against their will. Hearing their unfathomable stories of woe at least three times a week (when she wasn’t doing her freelance web design job for money that actually made a noticeable difference in her bank account) began to take a toll on her psyche. And it was one that Regan couldn’t seem to understand or appreciate as he touched her or licked her or tried to kiss any part of her body and felt it cringe. He seemed to want to ignore it to the point of forcing Alise to actually say the uncomfortable words, “No!” “Stop!” or “Don’t!” The slightest hint of lasciviousness on his part made her want to retch. And one night, she finally did. It had been after she “let him” penetrate her earlier that evening. After so much of his passive aggressive hemming and hawing, she felt she had no other choice but to appease him in this way. To quiet his mind, therefore her own. For he had that unique ability to imbue others in the same room with his own bad mood. She didn’t have the strength to deal with this kind of energy while at home–she already had too much of it in her line of work. And the last thing she wanted to attempt was to talk to him about it.

For all she ever did was talk about heavy emotional issues. Home was supposed to be her respite. If she lived alone, maybe it would be. Once upon a time, she used to. But then Regan filled her head with visions of true love coinciding with domestic bliss. A fairy tale if ever there was one. She realized now. So when the chance came to provide a viable excuse for leaving him to his own pulling himself devices, Alise jumped at it. This was her chance to work and exist in peace. To not be faced with a scenario so awkward and inexplicable, she would never be able to describe it to any of her friends without shame. And even barring the shame, she doubted her explanation could truly get them to comprehend the bizarreness of it. For she imagined everyone else’s sex life to be so healthy and stark raving normal that her own lack thereof would come across as just another way in which she was some sort of freak.

No, she couldn’t tell anyone about Regan’s anomalous behavior. Treating her as though he had paid the requisite two dollars for a peep show in the Times Square of the 70s. And, at this point, if he had been giving her dollars for her inspiration as pulling himself material, she would probably be making more than she did at the counseling center. So no, she felt no remorse about leaving him on his own for Christmas. He had plenty of friends (or at least acquaintances) in the San Diego area that could adopt him for a couple of days–those specific days of Christmas Eve and the 25th, when loneliness is at its most palpable. It’s not as though most people didn’t bolt at the chance to flee from their families once the meal was over to meet friends at a bar. He would be fine.

She told this to her parents as well when they asked if they were ever going to meet “this Regan of yours.” She shrugged. “Someday.” To be sure, she prayed that day would never actually come, for she had always managed to evade introducing her parents to any of her past boyfriends; they had all been such ephemeral phases in her life, after all. The one person she did ever allow to meet them ended up grinding her heart to a pulp, so she certainly wasn’t ever going to make that mistake again. The involvement of the family in a relationship equals death. Yet now that she was approaching twenty-nine, the pressure was on her to “settle” down with–or just settle for–someone. Someone she would have to introduce eventually. But she knew somewhere in the not so far corners of her mind that it wouldn’t be Regan. “The guy who pulled himself” like it was an autistic obsession. And here Alise had been so convinced that sexuality was being stamped out in the American male. In a way, that he could be so contented with autoeroticism perhaps signified that it was.

She sighed as she washed the dishes at her parents’ sink, thinking of him lying in bed just pulling himself. One of these days, he would pull his dick right off from sexual frustration. And somehow, it would be her fault. Because it was her responsibility to please him, was it not? In the role of “girlfriend” she had signed on for, this was the expectation: please me or leave me. She didn’t necessarily want to do either, but was starting to see that she was being backed into a corner. Things couldn’t continue on as they were in that damned room, him beating it while she tried to work at the desk located to the side of their bed. The thought of it seemed to her like some version of Sisyphean punishment, doomed to a fate of being wanking material for someone she couldn’t bring herself to have sex with in her desexualized state.

She couldn’t bear the idea of going back to such a scene, nor could she cognize the idea of hurting the person who had, for a time, been her saving grace in a world full of madness–now instead, just another part of that madness. As she hung the last dish to dry in the rack, she turned off the faucet, allowing the The Pinkprint, which she had put on for background support during this mundane task, to blast to its utmost potential without the sound of running water obfuscating it. And as “Get On Your Knees” segued into “Feeling Myself,” Alise could only burst into a paroxysm of laughter at the image of Regan to the lyrics of this song reimagined as, “Pullin’ yourself, you’re pullin’ yourself.” It was then she knew just how ridiculous the entire thing was. That this could be the anthem for Regan’s masturbation addiction. Maybe she ought to record it with her own lyrical revisions and then bring the song back to play for him as a belated Christmas present.

Of course, what she couldn’t know was that by the time she returned to San Diego, Regan would have experienced something of a perverse Gregor in The Metamorphosis transformation. Yet instead of turning into a giant bug, he had mutated into a giant penis bouncing off the walls, waiting to stab indiscriminately at her hole as she walked through the door with her suitcase and then ran right back out again, never to return to the apartment where the breeding ground for male sexual frustration manifested into this. For instead of “castrating” him, as was the usual association when a male’s desires weren’t fulfilled, she had empowered him through his rage to the utmost (phallic) degree.

And who knows? Maybe that giant dick would breed another and another until the entire building simply combusted from an overflow of peen flesh. All she knew for certain was that she would never be able to listen to “Feeling Myself” again.