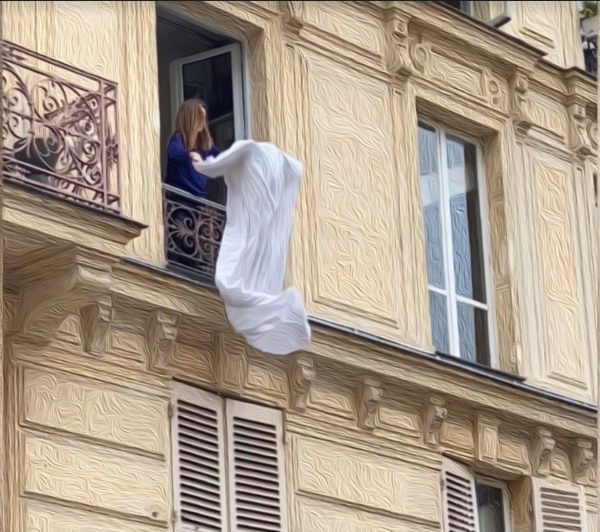 Shaking it out, letting it flow endlessly in the wind. The sheet was like a hypnotist’s pendulum, soothing her with its mundanity. This was the day-to-day monotony of household tasks that few were impervious to. Few women, at least. Certainly not Hélène, who had decided at some point in her life to trade away any ambitions or desires off for the “luxury” of not dealing with the “real” world. Hélène truly loathed the collective perception that one world–one way of living–could be deemed real and another not. How could anyone genuinely believe such a thing when it was so patently clear that all reality was subjective. Hers was starting to feel more and more so, that was undeniable.

She supposed she could feel the cracks in her smile forming after two years of marriage to Gustave. Gustave who could all at once turn from Jekyll to Hyde with one minor faux pas on Hélène’s part. For instance, if she didn’t poach his salmon perfectly. Or if any of the clothes she had hung out to dry for him were put away in his drawer with even the slightest tinge of dampness. And he could always tell. The depths of his fastidiousness imbued him with some kind of sixth sense. An ability to intuit whenever Hélène had incurred the most minute of infractions with regard to her “wifely duties.” That’s what he called them… to her face.

He had taken a shine to using the phrase about six months after their wedding. It was the morning of January 29th. She remembered the date distinctly because the news was inundated with reports of the French ambassador’s death in Kinshasa the day prior, a casualty of an attack on the French embassy during mutinous protests (or is it riots? There was looting involved, after all) by Mobutu Sese Seko’s troops. This seemed intermingled with other stock footage of chaos in the Africa that France constantly tried to insert itself into. But a forcible entry is never welcome in any iteration. These harrowing images seeped into her mind as she folded the laundry with the TV on. She couldn’t say if that’s what affected her–or rather afflicted her–with a crippling migraine, or if it was something deeper, more inchoate than that.

All she knew for sure by two o’clock was that she needed to lie down in their darkened bedroom, drawing the curtains so that no light could get in. Total blackness. Apparently such an environment was quite effective, for before she knew it, she felt Gustave shaking her violently out of her slumber. It was already 6:30. She had not finished folding the laundry, washing the breakfast dishes, nor had she even begun to prepare the dinner menu. When her eyes opened, she could immediately see the rage in Gustave’s. He was affronted. It was as though she had committed some convictable crime. “What is this, Hélène?”

She rose slowly–too slowly for Gustave’s liking, so he yanked her by the arm and dragged her into the kitchen. The TV was still on. This time, she could hear the newscasters talking about Madonna’s latest sexcapade. Even Madonna couldn’t seem to get away with doing what she wanted. Gustave proceeded to move Hélène’s hands for her, wielding them like she was his marionette. And she was. He mockingly instructed her as he placed her hand on top of the sponge to guide her on how to wash a dish. “This is how we soap up the plate, Hélène, see?” He shook her hand violently over the plate in question, crafted of white and gold-tone enamel, and adorned with a hand-painted butterfly border. She found something about that border endlessly comical in this moment. Spiteful, too. For if this existence was what her version of “transformation” was, she would rather go back to being an unmarried caterpillar.

He continued to thrust her hands about with arbitrary forcefulness, and she could, feel, literally, how aroused he was getting as he dug his groin into her backside. “If I ever catch you neglecting your wifely duties again, you’re going to wish you had actually gotten a difficult job. This shit isn’t hard, Hélène.” Then he leaned in to whisper in her ear, “But my dick is. So why don’t you make up for your incompetence today by performing another very important wifely duty? The most important of all.”

She did as she was asked. Instructed. Ordered. Hating it the entire time he thrashed her head against his raw meat.

When she pulled the uncooked sausage out of the refrigerator, that flashback to the first time Gustave had used the term “wifely duties” came flooding back to her in as much of a deluge as the cum he spouted on her face that January 29th after he got his sweet release. How and when would she ever get hers? The memory of that evening was like a shock of PTSD coursing through her veins, making her cringe and shudder as she recognized the true instant she gave up on herself. That was the night he broke her, conditioned her never to expect more and always ask for nothing out of the marriage. Well, nothing more than a roof over her head and an allowance for frivolities to distract her from her lack of a “real” life.

She was lucky he hadn’t thrown her out on the street, he would often remind her. So she learned to perform the menial tasks of being not only an average human and “productive” member of society, but a housewife with the skill and grace of someone who was actually interested in what they were doing. Of course, Hélène was anything but engaged. Every day, she felt more and more as though her life was giving her a lobotomy. But what else could she do? Too much time had passed now for her to become educated or certified in a field that might deem her “economically viable.”

She had let that chance pass her by when she foolishly saw Gustave as an opportunity to escape the “real” world. But her own alternate one was plenty real. And so were the imagined phantasms that kept her company during the day while she worked. She couldn’t say for certain when the ghosts started to appear. Perhaps it was sometime after she started reading The Second Sex in secret (which she would do by going to the nearest bookshop to pore over the pages). She could envision the same line over and over again in her mind: “…her wings are cut and then she is blamed for not knowing how to fly.”

Hélène wanted so badly to fly. She figured that’s why the ghosts started to come around after that. To teach her how. Often, they would simply observe her, and it was more of a comfort than a terror to have them there in the room. They were at least less judgmental than Gustave. It was about two weeks after they appeared that they seemed to think she was worthy of being taught how to fly. They motioned for her to come to the window. To look out and take a good look at the vista. To appreciate it one last time before she metamorphosed. For you see, in order to fly, you, too, must become a ghost. And in order to become one, well, you have to die. Kill yourself, in this case.

And that’s exactly what Hélène did as she dove off the balcony with the white sheet she had just taken out of the washer, letting it envelop her (maybe some part of her hoped it would convert into a parachute). Indeed, if one didn’t know better, they might say it was already a ghost that was plummeting to its death as they watched her struggle and strain inside the linen before crashing to the pavement, the white fabric suddenly drenched in the red of her blood.