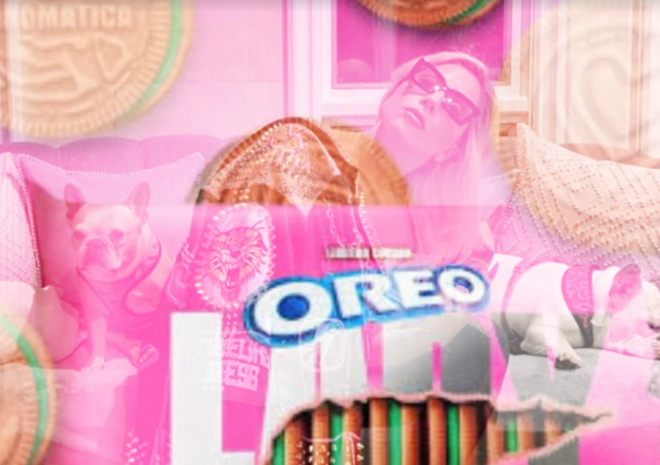 It wasn’t planned, not at first. The entire thing just became a runaway train, like so many botched enterprises. Eleanor really just wanted to talk to Lady Gaga, and she knew the best way to get a celebrity’s attention (when they didn’t have a child) was to threaten the life of their dog, or dogs. Stefani, as Eleanor preferred to refer to “the chanteuse,” had been away gallivanting in Rome under the guise of shooting a movie called Gucci despite the narrative not actually being about Guccio Gucci. Because when it comes to a Hollywood rendering of Italian fashion icons, the preferred method is to highlight murder and scandal (see: The Assassination of Gianni Versace). It appeals to the stereotype of Italians as the only race “hot-blooded” enough to commit or evoke crimes of passion. And everyone–including Stefani–loves a good stereotype, especially when it comes to Italians.

Eleanor wasn’t Italian, but she was no fool either. She could see through Stefani’s shtick of constantly touting being a proud Italian-American when, to be honest, not even one of those would be so lax about food as to peddle their own iteration of Oreos. Oreos that, believe it or not, Eleanor desperately wanted. She had searched high and low for them in every grocery store in Los Angeles. But they were reportedly “sold out nationwide.” As though it was the hottest commodity since a Cabbage Patch doll (the popularity of which was before Stefani’s time, but not Eleanor’s). It was infuriating. And all the more so because Eleanor felt that she was just another simpleton falling for the marketing ploy. Why was it so important to her to have these? She couldn’t understand. Yes, she was a fan, but she didn’t like Oreos that much–thought they ultimately left a long-lasting and unpleasant aftertaste.

Eleanor also felt Stefani should have been using her “platform” to promote health foods during this time more than ever. Catering to the “comfort” people wanted while mostly relegated to the inside watching their streaming services, Stefani was just another part of enabling the obesity problem in America. Eleanor, having herself struggled with weight issues throughout her teenage years (at which time she was endlessly ridiculed), came out the other side vowing never to get caught in the vortex of binge eating again. Perhaps that’s another reason why fate saw fit to intervene in keeping Eleanor from accessing these coveted “Lady Gaga Oreos.” Which, from what she had heard about them from others, weren’t really pink on the outside, so much as a radioactive orange. What a scam, and she was falling for it every day that she scoured the aisles at Gelson’s, Ralph’s, Pavilions, Jons, Vons, Safeway, fucking Albertsons. There were no Oreos to be found.

And the more she searched, the angrier she became. Meanwhile, Stefani was off in Italy while her fans continued to grow fat on processed and artificial foods that she herself wouldn’t be subjected to in her so-called homeland. Eleanor had had it. She wasn’t going to stand for this manipulation and disappointment any longer. So the seeds of a thought turned into her hatching a semi-formed plan. One that would enable her to communicate directly with Stefani so that she could 1) procure a supply of Oreos and 2) tell her to discontinue the product altogether. Even though they were “limited,” she was aware their popularity might spur a “reissue” on the part of the Nabisco company. She had to ensure that didn’t happen. So she figured she’d strike where it would really hurt: the dogs. The French bulldogs. And here Eleanor thought that Stefani was all about being Italian, so why not a Lagotto Romagnolo or a Volpino, huh? Where was her pride in her “heritage” when it came to dog owning?

Being a long-time resident of the L.A. area, Eleanor knew which celebrity resided where by heart (even when they sold their house to another celebrity). And at one point, back in the second Golden Age of Hollywood called the 90s, she had been employed as a Starline tour guide to give visitors far and wide a breakdown of where the stars lived. She knew perfectly well the home Stefani inhabited on the Sierra Bonita block. It was no Sunset Boulevard, but then, Stefani hadn’t quite reached “Norma Desmond age” yet.

Having spent about a week doing a bit of reconnaissance, she had determined what times of day the dog walker stepped out with the creatures in tow. Eleanor figured her best bet for nabbing at least one was the just before ten p.m. walk. That was when the least amount of cars passed by and the darkness had fallen to obfuscate her physical form. Stefani would be forced to talk to her dognapper if she ever wanted to see her precious babies again.

The gun was brought along as a method of extreme precaution. The last thing Eleanor needed was for the dog walker to get uppity about handing the bastards over. Flashing a gun would be all she needed if this guy tried to act macho (not that a Lady Gaga dog walker could ever really achieve that effect). Wanting to secure the advantage of taking him by surprise, she came up as close as she could to him until he finally seemed to bristle in that way you do when you know someone is following you.

Just as he whipped around to see who was there, she brandished the gun and calmly demanded, “Hand over the dogs.”

But rather than being terrified, as Eleanor had expected him to be, he was instead irritated. He even rolled his eyes at her as he scoffed, “Get the fuck outta here. I’m not giving you shit.”

He then turned around again to keep walking, thus leaving Eleanor no choice but to pull the trigger. How could she not after he called her bluff? She wasn’t a great marksman, and she tried her best not to hit him anywhere fatal, but she was pretty sure she might have as she saw him topple to the ground. With no time to spare, she grabbed the dogs by their leashes and ran back to her car, which she had parked just at the end of the block.

It didn’t take much time for the news to break, and when she heard that Stefani was offering a $500,000 reward–“no questions asked”–she had to laugh. First of all, why not a million? And second, she wasn’t so easily conned as to believe that no questions would be asked or that a seamless exchange of ransom money could take place without extreme machinations on Eleanor’s part.

She made contact with the LAPD with an anonymous note (Zodiac killer-style). It instructed that she should be given Stefani’s number to call her and that Eleanor would make the arrangements for the dogs’ release directly in this way. They did as they were told, such good little piggies when in service of the celebrity.

Upon making her transatlantic call from a burner phone, she had to admit this was a fan’s dream: a direct line to Lady Gaga. She froze up a bit at first before remembering that the more time she spent bumbling, the more traceable the telefonata became. So she laid into her spiel, explaining that all she wanted was a sizable Lady Gaga Oreo supply and for her to vow to discontinue the product so that she might never be a catalyst in fattening up her fans again.

“Are you fucking serious? You put me through all this and what you want is a few packs of fucking Oreos? I’ve never hated someone (except Madonna), but I honestly think you’re the most despicable person.”

Eleanor said nothing, realizing her fanship was crumbling. Stefani continued, “I’ll give you the damn supply and then you must release those dogs, understand?”

Eleanor clammed up before shouting back, “Yeah! But do you understand that you’re not Italian?! Italians don’t shill Oreos!”

They arranged a dropoff point. Eleanor, draped in a burka-like ensemble that concealed her identity, would pick up the giant box of Oreos near the Downtown Los Angeles portion of the L.A. River and then deposit the dogs in the same spot. Everyone would get what they wanted. But no, Stefani had to get brazen. She didn’t even show up herself, for one thing, and then assumed Eleanor wouldn’t check inside the box before leaving the dogs. And when she opened it to find nothing more than regular Oreos, she let out a banshee-like scream. How could Stefani have the gall to attempt duping her in this way? It was then she took out her athamé from the local occult shop in Silver Lake and did what she needed to as a contingency for such an outcome: slit both dogs’ throats. Oreo revenge paid in canine blood.

At the Century Regional Detention Facility, Eleanor repeatedly requested Lady Gaga Oreos for the duration of her sentence. She never received them. Though there was one instance where she was able to pay (in cigarettes) for a single moldy morsel of the “pink” and green concoction that a prisoner managed to finagle from someone who was connected to, of all people, the dog walker Eleanor had shot. In L.A., everything really is less than six degrees of separation.