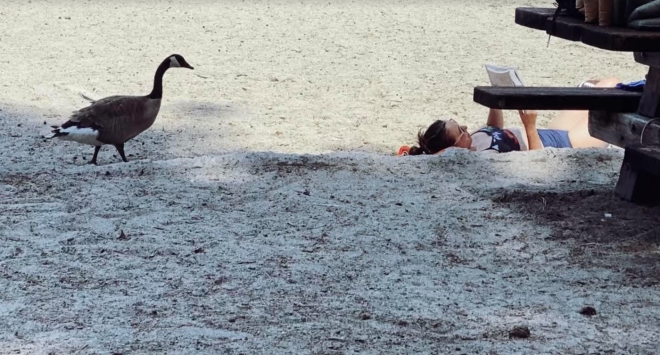 The government had declared a proverbial “lid off” approach to everything now. One that had made the nation go particularly apeshit. Man was nothing, after all, if not entirely apelike. Particularly in this part of the world called “America.” As for Mia, well, she had decided to take a chance on dipping her toe into the literal water for the sake of reingratiating herself with humanity. Invited on a little jaunt with some friends who were heading out of Reno for the day to secure some beach time in Tahoe, Mia figured, foolishly, “What could go wrong?” The only question to ask yourself when you want absolutely everything to.

Mia had already endured a rather rough year. Her job at Fantasy Girls obviously got put on hold during the pandemic restrictions, though, luckily the Nevada government was all too willing to acknowledge that stripping was real work that warranted unemployment until the industry could get back on its feet. Yet, for some reason, Mia (stripper name: Sapphire Knight) was inclined to believe the universe was trying to tell her something. Like, maybe she should pursue a more ironclad (read: pandemic-proof) career path. But, at the same time, she had dropped out of high school just before junior year was going to start, all because her mother told her she needed to start contributing money to the “family pot” if they were going to be able to pay for her brother to go to college at UNLV, where he ended up flunking out by the end anyway. So that was what ended up happening when a mother chose to gamble it all on the “golden son.” And Mia was the one to pay the life-ruining price. Sure, she could try to get back on track, realign her trajectory to return to the “straight and narrow,” but she was too far down the wrong, cocaine-laced path by now. And she was only twenty-three. At the same time, she felt more like forty-three for as wizened as this lifestyle had made her.

Incidentally, her mother was still all too happy to collect from her wages long after Mia turned eighteen. The main problem being: Mia was enough of a pushover to allow it. Plus, she felt bad for her mother, who had always suffered from chronic leg pain (or so she said), compounded by decades of being on her feet all day as a waitress. She did want her mother to have some relief, so she helped with whatever money she could. This didn’t leave much for her own expenses, and certainly not anything like a vacation. And so, she had to admit that the prospect of even a day trip was alluring. The last and only time she had ever gone to Tahoe (despite it being barely an hour away) was at the beginning of her sophomore year. Her then boyfriend, Terrence, wanted to go to the beach specifically to do the mushrooms he had just paid “out the ass” for. Apparently, they were supposed to be “everything.” Thus, he was insistent that they needed to be appreciated on a beach… in Tahoe. She couldn’t even remember which one it was now; she had to block most of that weekend out. The shrooms, rather than lending Terrence a peaceful or revelatory aura, instead made him completely paranoid and belligerent. He took all his aggressions out on Mia as a result of her being the lone presence in his orbit with which to do so. Well, minus the many other hallucinatory beings he saw on his trip. By the end of three solid days of playing nursemaid to her drug-addled boyfriend, she wasn’t able to make much of a positive association with the “eighth wonder of the world.”

Maybe that’s why she subconsciously stayed away for so long. It was a traumatizing experience for her to go there, and she was afraid it would, in some way, be relived. Of course, she wasn’t wrong, even if a more learned person might accuse her of being like that oracle in Oedipus Rex who manifested a self-fulfilling prophecy. So be it, her thoughts were her thoughts. She couldn’t control them any more than the weather. Alex from A Clockwork Orange knows all about it.

The group of friends who were going consisted of five other people: Matt, Lorenzo, Tammy, Alicia and Sam. She knew them primarily from her nightlife ramblings—both Tammy and Alicia had also worked at Fantasy Girls, but moved on from it after graduating from community college. Still, she never felt as though they judged her for staying on at the club. Even though some part of her wished that they would. Or at least urge her to enroll in a few classes as well. Something that might motivate her to stray from her current “comfortable” situation. As for the boys in the crew, they had all been patrons at Fantasy Girls at one time or another, and managed to find a way to strike a friendship with these women after hours. Granted, the dynamics frequently went beyond “just platonic,” and there had been more permutations of coupling and throupling between them than on Gossip Girl. But Mia felt this was the thing that made them work so well as a “friend” group. A pity, she thought, that no one was willing to throw in enough money for a hotel room so that they might really see where a “fuller” vacation could take them. But such were the vagaries of living from paycheck to paycheck.

Upon arriving and finding a decent place to park at Meeks Bay Beach, Mia had to admit that all of her horrible recollections of that shroom weekend were melting away in the sun. It felt so reinvigorating to be out of Reno, and she was the first to take the plunge into the freezing cold water to add to that invigoration. All around her she could see small fish happily dancing about, rotating around her like little synchronized swimmers. For the first time since high school, she actually felt a sense of freedom. The kind that usually only washes over you when you’re young (despite still being under a parental thumb).

She was so relaxed and serene after her swim that she fell asleep soundly in the sun. Soundly enough for Matt, Sam and Lorenzo to able to cover the lower half of her body in a mermaid tail. Which was all very “cute,” at first. She even kept the sand on her rather than bothering to shimmy out of it, asking Tammy to hand her the book she had brought, Tahoe Dark—the Todd Borg mystery novel she had deliberately purchased for this particular occasion. She didn’t get time to read very often and maybe she should have chosen something more “elevated,” but this wasn’t West Egg, for fuck’s sake. Why bother putting on airs? Tahoe, for all its beauty, was not a place filled with “sophisticates.” By and large, it was filled with the tacky and the athletic. All the rich people that had kept trickling in had their own private beaches and boats, not to be seen around here on the public beach for plebes.

As she turned the page to figure out what fresh hell was going to happen to the house cleaner next, Mia could intuit a looming “presence” behind her. One that was decidedly sinister, and certainly couldn’t have been any one of her friends, for she looked over to see that they had all decided to cavort in the water at the same time. Who—or what—then, was lurking behind her?

She started to turn, cautiously, at first, then whipped around with more urgency to see the rabid goose start to become violent at the sight of her own ostensible bellicosity. Forgetting the fact that she was half-buried, she tried to move, only to be bogged down by the constricting, finger trap-like nature of the sand pile that had “tucked her in” to the beach. This gave the increasingly combative goose ample opportunity to proceed pecking the shit out of her.

The geese had grown accustomed to having the water to themselves, after all. And Mia’s free-wheeling encroachment right next to the trash can that this particular goose had gotten used to possessing all for himself set him off in some way. Notorious already for not wanting share “their area,” no one warned the geese of the reacquaintance of “civilized” society back onto their beach. It hadn’t been this crowded in a year. Still, one doubted Mia would have found much comfort in that reason for his violence as the goose continued to maim her. She could see her friends frolicking about freely in the water from a distance, none the wiser to her plight. Indeed, the goose seemed to have chosen the ideal moment for lying in wait to emerge just when it appeared as though everyone had absconded from her particular sand patch. The loudness of the beach further aided the goose in his aims, obfuscating his honking and her screaming. She could feel the life draining out of her, and, for a brief moment, she thought of, out of everyone, Tippi Hedren.

She could hear herself moaning, floating up above her body as though watching it all from afar. Blood was coming out of the left corner of her mouth, and she found that in particular to be the most unsettling element of all. Her “mermaid fin” was covered in blood, too. But what did any of that matter now, as she felt herself being pulled to the other side?

Lorenzo was the first to notice as he approached. The goose, by now, had long disappeared back into the water, and maybe they would never fully understand who the real culprit behind the attack was. Mia’s vocal cords were making involuntary sounds as she tried to say something, she knew not what. It was too late for “Help!,” though they did take her to the hospital. Having lost too much blood, she would die there “officially” instead of on the beach. Which was almost annoying because it took away from the poetic symmetry of her writing Tahoe off as nothing more than a place where terrible experiences occurred… on the beach. First, the shrooms, now death. At least nothing worse could possibly happen.

The remaining members of the group were noticeably shaken after driving away from the hospital. The authorities had contacted Mia’s mother, and it was all up to her now to handle what came next. Funeral arrangements, burial place, etc. It was no longer in their control. Not that anything ever was. As they rounded the bend that might lead them back to Meeks Bay Beach, Tammy was the one to suggest, “Should we go back to the beach?”

It didn’t take even a second for Alicia to chime in, “It’s what Mia would’ve wanted.”

Turns out, the rest of their day was so pleasant they did decide to each chip in and get a hotel room for the night. A good time was had by all.