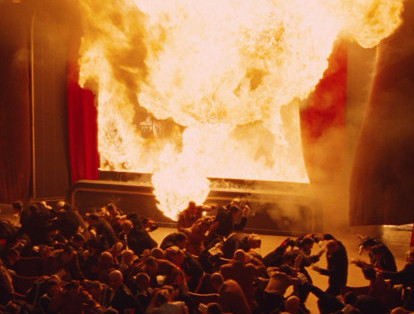 “You don’t think beyond your own skewed perspective.” This is what Ramon told Isabelle as she waffled about leaving the house. The thirty-minute “cat nap” she was supposed to take amounted to about five minutes in between all his snoring. While he was enthusiastic about the prospect of seeing a movie for the first time in several months after theaters everywhere had been shut down by the pandemic, Isabelle was wary. She had grown used to the comfort of watching movies and shows in their apartment, sequestered high above the tourists that once frequently populated the Barri Gòtic before the Americans stopped traveling as much. Now that things were “back to normal,” Isabelle was out of excuses for why she couldn’t leave the house with Ramon, who had never really acted as though there was any kind of health crisis afoot to begin with.

Already vexed by the selfish manner in which he had ruined her chance for slumber, she snapped back at his comment on her perspective, “Uh, first of all: fuck you. And second, I think that’s just called solipsism.”

He rolled his eyes. “You take everything so personally.”

She glared at him. “How could I not take a comment like that personally? It was tailored precisely to me. That was your entire intent.”

Ramon ignored her comment as he daubed his ears with cologne and went about the process of performing the final touches required for going out: combing his hair, running the thumb he just licked over each eyebrow to ensure no hairs were askew. And then, he went to the coat rack to put his usual black bomber jacket on. She, meanwhile, was still lying on the bed half-dressed, desperate to get out of this engagement. Isabelle knew that if the situation were reversed and Ramon had made a promise to do something he suddenly didn’t want to, she would be expected to just let it slide. But the same courtesy would not be extended to her, this much she knew. And she really didn’t want to deal with the week-long fallout of enduring one of his irascible moods as a result. Despite realizing that she was enabling his behavior, giving him the green light, once again, to treat her like shit (and no, she didn’t need a therapist to tell her this), Isabelle still wasn’t ready to call a spade a spade regarding their defunct relationship and simply end it. After all, she would be the one who had to move out—and finding another apartment in Barri Gòtic would be all but impossible.

With this in mind, she reluctantly started to rise and put her clothes on, Ramon, all the while, expectantly staring at her. He broke the thick silence with the demand, “You’re not still tired, are you?” Isabelle stopped abruptly in the middle of slipping her black jeans on, nearly tripping over herself as she snarled, “Yes! I’m. Still. Fucking. Tired.”

Ramon actually cowered, sensing that he should know better in this moment than to further test her patience. “All right, Jesus. We don’t have to go if you don’t want to.”

“No, no. We’re fucking going. You’ve made a whole big ‘thing’ about it now, and I’ve put my clothes on. So let’s just go see the longest fucking movie ever so you can enjoy the sound quality or whatever.”

Isabelle finished slipping her left leg into the pants and hopped up like a phoenix rising from the ashes of a botched nap. Ramon was, all at once, sent back into a rage, embodying his usual aura of dominance. “You know what? Things between us have been shit for a while. Even before the lockdown. And maybe, if you’ll remember, one of the things we once had in common was a love of going to the cinema. Seeing movies as they were meant to be seen. But now, it’s like, because you’ve let this little disease infect your mind rather than your body, you’re afraid of every fucking ‘possibility’ of contracting the goddamn virus! I can’t take it anymore! I wanna live my fuckin’ life! And that includes seeing a movie in the theater regularly.”

Feeling the vitriol emanate from his very core, it was as though Isabelle was standing there in a braced pose for the absorption of all this pent-up contempt he had been waiting to unleash on her. So it was he, she discovered, who would be the one willing to end them when she wouldn’t. That’s when she fell back on the bed and stoically replied, “Fine. Go to your precious movie. Support the Hollywood machine, you pretentious motherfucker. But I’m gonna take a goddamn nap in peace without you roaring in my ear like a boar.”

Ramon regarded her in mild surprise. He didn’t think she would actually have the cojones to say no to him in such a fashion. He was bluffing about wanting to truly break up and she had managed to call him on it. All he had hoped to achieve was to get her to come to the film, perhaps not understanding that she had already agreed to comply to that request and that his goading ultimately turned her off completely. He wasn’t sure what he should do now. If he really did leave to go to the cinema, the relationship was sure to become a corpse. If he stayed behind and tried to soothe her a bit, there might be a chance for it to continue on life support as it had before. But, damn, he really wanted to see the movie…

The theater was packed, and even Ramon was left feeling a bit uneasy about the potential for this communicable disease to propagate in such an environment—mask and vax, or not. Still, he wasn’t about to walk away, even though he suddenly felt rather pathetic for being there alone. For it was the European way to be averse to doing anything alone—least of all something deemed to be such a “social” activity. If one could constitute sitting in the dark and staring at a screen as social. Perhaps what John Bender would call, “Demented and sad, but social.”

Settling into his seat with popcorn and a Coke in hand, Ramon was just starting to feel more relaxed—freer, even, in the knowledge that he was now technically single—when, right as the opening credits started to roll, a raucous, obliterative sound boomed throughout the theater. Before Ramon could find the time to apprehend what was actually happening, he was sent into a pitch-black state of unconsciousness.

When Isabelle awakened from what she had to say was arguably the best, most restful nap of her life, she also awakened to the sound of her phone going off a mile a minute with notifications. Irritated more than alarmed, she rolled over to grab the device and see just what the fuck was going on. First, it was the news headlines she noticed: “MAJOR EXPLOSION AT MOVIE THEATER KILLS ALL IN ATTENDANCE,” “UNKNOWN IF TERRORISM WAS AT PLAY IN CINEMA BOMBING,” “FADE TO BLACK: MOVIEGOERS KILLED IN THEATER EXPLOSION.” Although her mind, of course, immediately flashed to Ramon, she couldn’t—wouldn’t—make the connection that he might have been in the theater in question. But then she noticed the messages from all their friends, as well as Ramon’s family. Evidently, Ramon had texted a few people to meet him at the El Greco Theater beforehand, but they all told him it was too short of notice…maybe next time. Not knowing, obviously, that there would be no next time with Ramon. So yes, there was confirmation that Ramon had been in this very theater when the bomb was detonated, likely by a terrorist because what else would be the reason?

She never told anyone about their fight, or that she was meant to go to the movie as well. Instead she made up the lie that Ramon had snuck out while she was napping, assuming he would be back before she even woke up. And that was the lie that made people feel comfortable, the lie that made all the sense in the world. Because if she had told them the truth, it only would have added to the tragedy of it all. It was sadder to die “for cinema”—because that is, essentially, what Ramon had done in his bid to explain to Isabelle the importance of going to the theater—as opposed to being a casual victim of happenstance. For, in addition to disease, ideological extremism was yet another reason to fear any public space in the modern age. Though Ramon probably would have told Isabelle she was merely suffering from her own “skewed perspective” to declare as much.