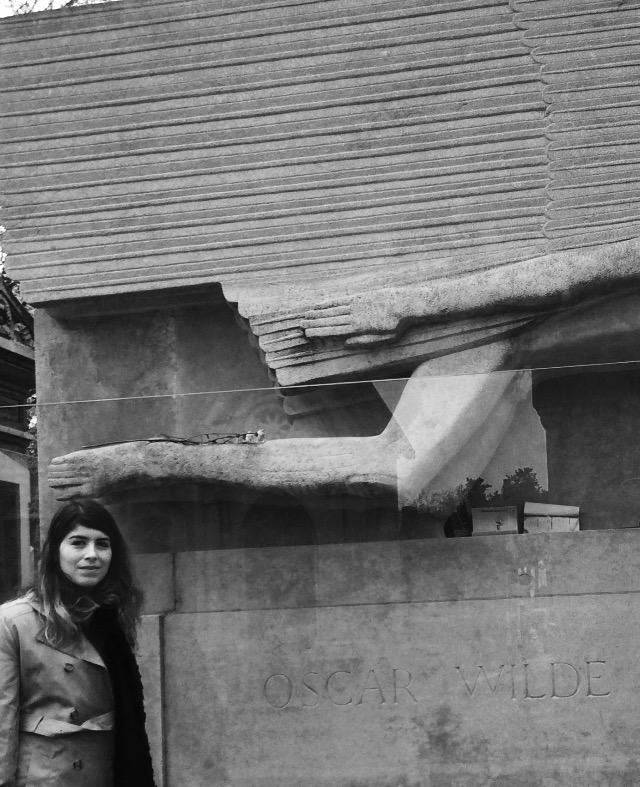 Even though it should feel frigid at this time of year, it does not. I take it as an omen to visit the grave of one of the only men who has ever meant anything to me in this life of vapid chauvinists whose sole wish is to talk of nothing. Oscar Wilde’s tomb is situated in a fairly prominent location in comparison to other famous people buried in Père Lachaise. Its construction was the subject of much debate between the sculptor, Jacob Epstein, and Wilde’s fans and detractors. Fans felt that a monument to Wilde should make some reference to his sexuality or a more famed piece of prose, while his antagonists thought that essentially any tribute to Wilde was utterly offensive.

Epstein instead chose to pay mild homage to the Wilde poem “The Sphinx” by crafting the tomb in the shape of a modernist angel with an Egyptian slant. Indeed, “The Sphinx” is quite indicative of Wilde’s life of repression and forced secrecy, featuring lines like, “Who were your lovers?/who were they/who wrestled for you in the dust?/Which was the vessel of your Lust?” But it wasn’t the mere conception of what the tomb should look like in order to best encapsulate the spirit of Wilde that proved challenging for Epstein. His difficulty in transporting the completed stone from England to France caused him to come up against contention from customs. When Epstein insisted it was a work of art he was carrying into the country, the French examiners refused to let him through without paying an import tax of 120 pounds for the stone. And so began the tale of Wilde’s monument, equally as troubled as Wilde’s life.

Standing before the plated glass barrier, which had to be put up in 2011 in order prevent excessive damage from the brightly colored lipstick kiss marks of faithful disciples, I think not just of Wilde’s persecution, but also of Epstein’s. In addition to his issue with entering Paris with the monument in tow, his work was compromised numerous times by authorities for its so-called indecency–a reference to the “particularly large” testicles present on the angel, eventually removed altogether and rumored to have been used as a paperweight by the manager of the cemetery in the 1960s. They have since gone missing without a trace. Although a sad reality that Epstein’s work could not be displayed as intended, there is something fittingly poetic about the tomb’s struggle into existence and to sustain that existence.

I am able to look at what remains of Wilde without the interruption of others milling about in front of the sphinx-like grave. Maybe it’s due to the time of year, or maybe because everyone has forgotten that this Irishman ended up dead in Paris. Whatever the reason, I am both relieved to be alone and melancholic that no one else seems to care. They’d rather see Jim fucking Morrison. But then, surely the infinite amount of kisses still peppering the glass encasement are an affirmation that the writer and aphorist continues to receive his due.

As I make my way toward the back of the structure, I can see the beginnings of his biography, detailing his date and place of death on November 30, 1900 at the Hôtel d’Alsace in Saint-Germain-des-Prés. Below this is a carefully chosen inscription–a quote from Wilde’s The Ballad of Reading Gaol, written while he was in prison for the proven fact that he was a “somdomite” (yes, with an extra “m”). It reads as follows:

And alien tears will fill for him
Pity’s long-broken urn,
For his mourners will be outcast men,
And outcasts always mourn.

I must have read this at least ten times before I was satisfied enough to leave. Wilde was able to evoke something within me that can rarely be brought out: empathy. Being there, among a work of art that suffered to survive, I feel as though I know Wilde; I know what he went through and how he felt. Having to pretend to be a certain way, when all you want is to be. There is no worse feeling in the world, which is, undoubtedly, why outcasts will always mourn, and therefore probably always seek refuge at the grave of Wilde.

One thought on “Outcasts Always Mourn”