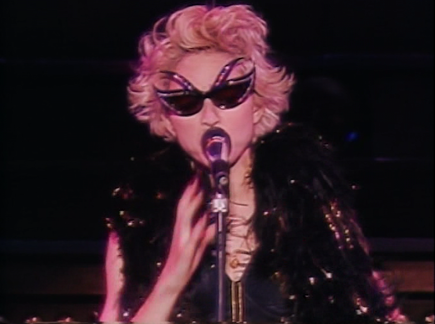 I fucked a guy once for a pair of sunglasses once. It’s more roundabout than that, I should say. Rather, fucking him led to the most magical pair of sunglasses I had come into possession of. He gave them to me as a parting souvenir so that I could walk out of his apartment not having to look at anyone in smudged makeup, the true mark of the morning after. I never questioned why he had women’s sunglasses on hand, though I assumed he wore them himself. At first, the accessory was just aesthetically magical, but then, one day, Jack and the Beanstalk magical. I don’t know how it happened–there’s no logic to the supernatural as I’m sure Charmed or any other WB show from the late 90s and early 00s has taught you. In any case, these sunglasses, with their cat-eye lenses and rhinestone rims, had the ability to make gay men fall in love with me. I know what you’re thinking: gay men are incapable of stomaching pussy, sometimes even in friendship form. But what can I tell you, maybe it had to do with the fact that they looked like the same pair from the “Where’s the Party” segment of the Who’s That Girl Tour, a fly trap for genuine quality gays of an old school nature.

Examine the cause though I might, it was always about the effect. And, because of my natural lack of affinity for straight men and the things they find important, I relished the discovery of my sunglasses’ magical powers upon walking through the West Village one day in search of a place to have an afternoon drink. Settling upon Marie’s Crisis–the perfect location for people having their own to ruminate–I noticed the bartender’s particularly attentive greeting toward me as I entered. “Oh my, you’re a bleached asshole amid a sea of hairy ones.”

I took my sunglasses off. “Um, thanks,” I said procuring a seat at the center of the bar.

The moment I put the specs in my purse, it was as though I became invisible again. Thinking of it as he turned away, I demanded, “Gin and soda.”

He retreated to the other side of the bar where he began chatting up a physical atrocity of an old man rather than further engage with the likes of a straight woman. Rapping my fingers against the bar’s countertop, I decided to make a business call (believe it or not, some people work really well while drinking) as I waited for him to notice me again.

“Pauline,” I snapped, after my assistant let the office phone ring three times.

“I’m calling to find out if you’ve heard anything back from DeSantos’ manager.”

“Not yet, Ms. Parks, but between you and me, I think you’ve got this client, easy.”

1) Pauline was doing what a I paid her to do: toss my salad and 2) Federica DeSantos was a rising theater star I had been vetting for months, taking her out to every restaurant in the Theater District and Hudson Navy Yards to convince her that I was the best publicist money could buy. Maybe I should have taken her somewhere on the Upper West Side instead. Had I done everything wrong? Or was it that I had done everything annoyingly right?

I needed this client or Maria Parks Theater Publicity would be as good as the Spice Girls without Ginger. I was losing my edge. And I don’t know if it had to do with my approach to the over 35 age box or if I had just lost the enthusiasm I once had for theater people. The Helen Lawson type doesn’t even exist anymore…there are no larger than life stars with even larger drug problems to match. Everything’s all on the level now–diets, juice cleanses, rehearsals that don’t miss a beat. Nothing is left unplanned, there is no room for organic stage beauty to unfold. I fucking hate what it’s all become.

I suddenly remembered I was saying all of this out loud to Pauline, who had probably glossed over by now. I hung up the phone. She couldn’t help me, only the bartender could. I motioned to him and shouted, “Excuse me!”

No response. I didn’t have to take this. I was a middle-aged straight woman, sure–the equivalent of being Rosa Parks at the front of the bus, or, in gay terms, they just wanted me to go to the back and be forgotten about. But I didn’t have to stand for it. I put my sunglasses back on and started to leave. That’s when the bartender, Nick, as I soon found out his name was, called, “Where do you think you’re going?”

I turned back around, confused, pushing the glasses up to my forehead. He cold-shouldered me again. That’s when I knew for sure: I had the control I needed over the gays to put myself and my company back on the map.

Days later, I had secured Federica DeSantos by bending the ear of her gay in my sunglasses. He was a 19-year-old twink from Florida who had already mastered the art of confidence it required to admit to people that he was from Florida. DeSantos worshipped him as her stylist and confidante. And with both of them eating out of the palm of my hand, I was getting back on the radar. Within the month, I had a stable of theater stars Lee Strasberg would have jizzed over. Everyone wanted me to represent them. All I had to do was keep the sunglasses on and the world was my tightly packed oyster (yes, that’s an ass reference).

I didn’t mind that, when gay men, fucked me, they only wanted to penetrate my backside. I didn’t even mind that it was all an illusion, their declarations about my intelligence and attractiveness all part of the spell that glinted from the rhinestones of my rims (no, that’s not an ass reference). What I minded was that they all still talked of nothing, Queen Mab style, not Queen Madge style.

Their vacuous spoutings about appearance, from Botox to waxing, left me mentally cold. I felt as though I was in a wasteland of picked brains, and all that could be processed from the remains was the inclination toward vanity. I had the success I wanted, thanks to them, but I felt as though I was walking through a new kind of living nightmare–one that was slowly making me go out of my gourd in order to ignore how much dumber I was becoming from all this emphasis on the physical.

One day, as a beautiful 23-year-old Brazilian gay named Enrico was transporting me to the surgeon that Paulo, the primary Italian gay I was taking it from on the regular, recommended after he noticed an “unsightly” laugh line on my face, I opened the door as we passed Central Park and rolled out. Enrico kept driving. Because even when gay men love you, they will always love themselves more.

I ambled over toward the lake, my sunglasses still on. Just as a gay couple in unspeakably fashionable running gear was about to come up to me, I removed them–tossed them into the lake. The gay couple recoiled, suddenly seeing me for what I was: a washed up crone, my visage stretched and pulled into oblivion thanks to the past two months. But I was myself again, fly trap homosexuelle no more. I then questioned what was worse: being a straight woman or being a straight woman without the love of a gay.