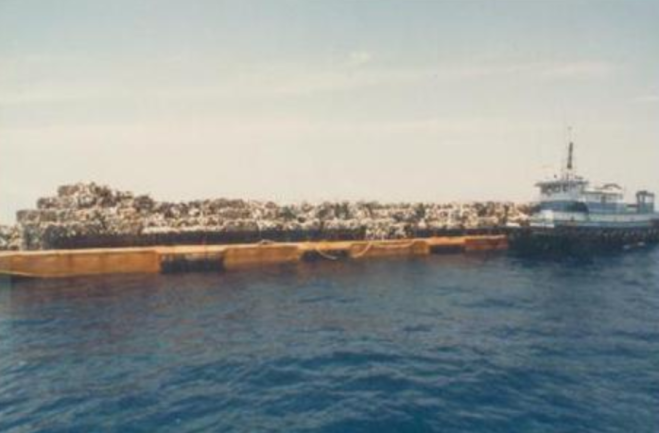 Julia Sullivan (Drew Barrymore) may have confessed to Robbie Hart (Adam Sandler) in The Wedding Singer, “I feel like I’m doomed to wander the planet alone forever,” but, truth be told, there are far worse fates than that. And one of them is to experience the same level of constant and eventually expected rejection while wandering the planet alone of the Lowell Harrelson and Salvatore Avellino-helmed Mobro 4000. Set for its voyage on March 22, 1987 from Queens and packed with non-toxic waste fresh from Islip, New York, the Mobro 4000 is each and everyone of us who can’t seem to find their “correct” place in the world. A place, quite simply, where one feels accepted and at home. Is not looked upon like piles upon piles amounting to more than three thousand-plus tons of garbage unfit to lay its odorous clutches in anyone’s so-called port–in the storm or any weather conditions.

Perhaps the greatest tragedy about Mobro 4000 is that it began its journey truly believing that it would reach its destination. That it would be “received.” Just as you probably thought the same around the time you hit puberty and realized you were a sexual being with semi-romantic leanings further fortified by the once nonstop barrage of romantic comedies released almost around the clock in an era called pre-2010. So you and it began with such high hopes, the Mobro 4000 for reaching its presumed mate of Morehead City, North Carolina and you for meeting anyone that might at least vaguely accept you for all your physical and emotional flaws.

As the person responsible for corralling the trash all over God’s creation in a tugboat called Break of Dawn, Duffy St. Pierre is the human synecdoche for the barge’s unwantedness. Making every attempt to take it to an area that would, if not welcome, at least “acquire” it, St. Pierre hauled its undesirable formation all the way to Belize after hitting up the Gulf Coast as well to make his best effort to get somebody to reap it. To execute Harrelson and Avellino’s original intention to “convert it” into methane, a polite way of saying set it ablaze, really. Incinerate it. Just as your heart likely has been after enduring the endless quest to unearth a chassis to take you in. To say simply, “Sure, you can stay here with me and I won’t turn you out at an unexpected moment’s notice.” There is endless comfort and reassurance in that. In the knowledge that at least one entity has your back, even if it is weighted down by increasingly fetid trash.

Instead, you, like the Mobro 4000, will reach a point where you’ll have roamed the earth so long looking for a place of acceptance that you’ve become not just a national laughing stock, but an international one as well. Dubbed the “barge to nowhere,” you are the “person for no one.”

While the century has long since shifted from twentieth to twenty-first (the twentieth being one of the peak times aloneness was unacceptable), and books called No One Tells You This written by people like Glynnis MacNicol are designed to reinvent the wheel of self-imposed guilt for being perpetually repudiated by sexual/romantic love, it doesn’t change the glaring reality of being caught out at sea with no refuge. To know that at each stop you make–each attempt you make–you will be rebuffed. You are a pile of trash renounced as potentially too hazardous to take a risk on.

Marion, who resented her name because it reminded her of Marion Crane in Psycho, could not help but make all of these comparisons between herself and the erstwhile wandering barge as the event unfolded. It had already been a rough year, what with having to leave her job at the Village Voice in favor of something more practical and lucrative at an office in Midtown. And then there had been Reagan’s overt dealings in the Iran-Contra Affair. It was all just too much at once, both personally and globally. As though Marion was forced to give up her dream and her belief in America in one fell swoop. Then again, how many times have Americans claimed to lose faith in their country only to continue to tout its greatness to anyone who will listen (largely, no one)?

That the garbage had to be upsold by its captain only adds to the insult of it all. Having to insist to the public, “Ninety percent of it is nothing but cardboard and newspapers and old tires. It’s got very little household garbage. All this stink they’ve been talking about–it never did smell bad.” Well, what a vote of confidence, Marion thought to herself as she read this little account, swiping aside a strand of her upswept brownish-black hair as she gnawed on a pencil out of the nervousness that was her stasis. It was just one of many papers all over the U.S. that had seen fit to document the barge’s (lack of) progress as the world watched in obscene interest over whether or not it would ever find its way. Comedians and late night talkshow hosts also found the barge to be rife for a wellspring of humor. Marion knew why everyone thought it was so funny–to call it The Flying Dutchman, the fabled ghost ship that can never make it to its port because of a curse damning it to sail the sea forever. That’s what it is, in effect, to be single forever. Of course, in many respects, Marion could see that there were liberating qualities to being so free from the chains of any port. At the same time, it was an undeniably lonely existence and one that only the strongest could survive without becoming just another wreck in the sea called navigating meaning.

Although Marion had only just secured this new position at Wellington Enterprises, her tracking of the barge’s sudden return to Brooklyn that day compelled her to call in with an excuse about having food poisoning, giving her just enough time to go to the far reaches of the borough where people lived instead of worked, to see it finally find its way back to the start, for all intents and purposes. She felt like she was engaging in criminal behavior, maybe she was. But she had to see every last shred get burned. She had to know that, even if there was no conclusion for her own ceaseless wandering without end, that at least her foil, this trash barge that had commandeered all mediums of news reporting during a part of the year that was too economically prosperous to find much else to talk about, could come to a just end. An end that at last found it permitted to be welcomed before it was expunged from existence. To be made aware that it was wanted by another before the ejaculatory blaze of glory that was its incineration. In this way, Marion no longer had anything in common with it.

One thought on “Wandering This Planet Like the Mobro 4000”