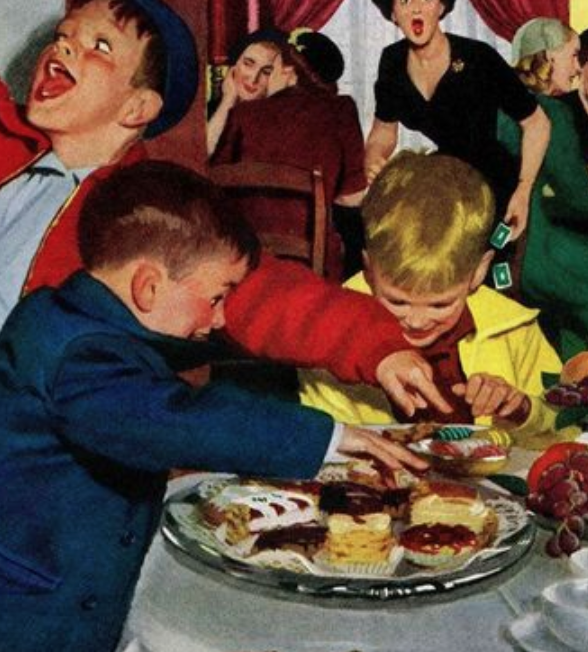 You could always tell who was coming over for dinner by what type of plates she set on the table. A table he felt was always dripping with ostentation as a means to prove her worth. Not to him, but any of the number of outsiders in the form of casual acquaintances and distant relatives that would “drop in” for half the night to drink from the proverbial chalice of their success. His success. The worst was when “Aunt Charlene” would come, because it meant she was bringing her three satanic children, two boys, one girl, signaled by the kid-friendly plates Gwenyth would lay out, each one featuring some “interactive” gadgetry that would only incite the spawns of satan to fling food at people with more gusto. They were color coordinated and often featured some creature or famed fairy tale character at the center of the plate. When Jack was a child, he couldn’t remember the existence of such frivolities. Or maybe growing up in Nebraska in the 40s was too much of a staid affair to offer this kind of nouveau riche “decadence.” When he moved to San Francisco in the early 60s, it was not to become part of the beat generation or even to relish in the delight of free-flowing hashish. No, it was to get as culturally far away from Valentine (that was the name of his one-buffalo town) as he could. He didn’t feel guilty when he walked silently out of the house where his five other brothers and sisters resided, his mother still expecting him to set the table for dinner and his father anticipating that now that he had got this “college education business” out of the way, he would come over to the factory tomorrow and start learning the trade that would be the rest of his life.

Jack never told Gwenyth about his past, not that day they met in Golden Gate Park nor when they had gotten close enough for him to propose. He never told her that he had abandoned his life for something better. Something more glittering. But now, sitting at the table watching the slack-jawed imps play with their dishware as he waited desperately for Aunt Charlene to pass the fucking wine, he wondered if this was the tinsel he had in mind for himself. If maybe he ought not to have bothered trying to correct the mistakes his own family had made with him in choosing to beget another. Sam, his nineteen-year-old, had already fled to Los Angeles and was bleeding them dry for “books” essential to his many classes at USC. Jack knew what “books” meant: whores and drugs. Sam had grown up constantly seeking more. He had been given too much in his youth, and therefore didn’t have an appreciation for anything. Ella at least had a good head on her shoulders, was already planning to stay in San Francisco to pursue a law degree from USF. It was as though she had taken it upon herself to be the salvation of the family name. It’s just a shame hers wasn’t a man’s. Jack sighed to himself as he watched Ella engage with the snot-nosed brats, almost irritated by how self-immolating she was. Did she get that quality from him? For it certainly couldn’t have been from Gwenyth. Gwenyth who wouldn’t be able to detect another person’s misery if they self-mutilated right in front of her. When they first met, her oblivion was a large part of the reason Jack was charmed by her. It meant she would be easy to lie to. Now, it was the thing he hated most about her. Wanted to shake and rattle her so that she would react to something if not his sheer unhappiness.

His thoughtful contempt was interrupted by one of the spawns of satan landing a direct hit of mashed potato into his eye. The evil triplets all laughed at him in unison, showing no fear of a potential eruption of anger on his part. He wanted to pick up his butter knife and dully stab them each in the chest. How could Gwenyth possibly be related to these oafs? But then, many of us so often find it hard to believe we share blood with certain people. Almost as though it serves to reiterate the fact that, contrary to what most Italians believe, blood means nothing.

Gwenyth emerged in a blustering huff from the kitchen carrying a pot roast. Taking note of Jack’s face, she chided, “Oh Jack, why don’t you go clean that up?”

Jack wiped some of the potato off, letting it fall with a plop on his plate. He sneered at Gwenyth. “Oh Gwenyth, why don’t you tell Charlene to have her mongrels put up for adoption?”

A hush fell over the table. No one could believe Jack had the audacity. If Charlene’s husband, Wayne, had been there, maybe he would’ve backed Jack up, interrupted the silence with roaring laughter to mitigate the tension. Alas, Jack was the only male among these hyenas, all looking poised to pounce. He sighed in defeat. “You know what? I’m going to the bar. You all enjoy the fruits of my labor.” He was sure to remind them of who really controlled the pursestrings so as to not get any commentary on the way out. He was also, more than anything else, trying to remind himself who was really in control here.

Sitting at the Stinking Rose Saloon, Jack wondered if maybe he was just a country boy through and through. If perhaps San Francisco was too progressive for the thoughts he had churning inside. The ones he had to suppress in an environment like this. All filled with its queers and beatniks. It was then that he decided to take a bus. He would leave silently again, just as he did the first time he escaped from a family. Maybe he could do this forever. Shed the familial unit like a skin. After all, they had already taken everything they needed from him anyway. A man was only useful in the germinal phase of things. After that, women took over everything to make it a well-oiled machine. And as a machine, there were no feelings involved. Only bourgeois desires designed to quell all real emotion.