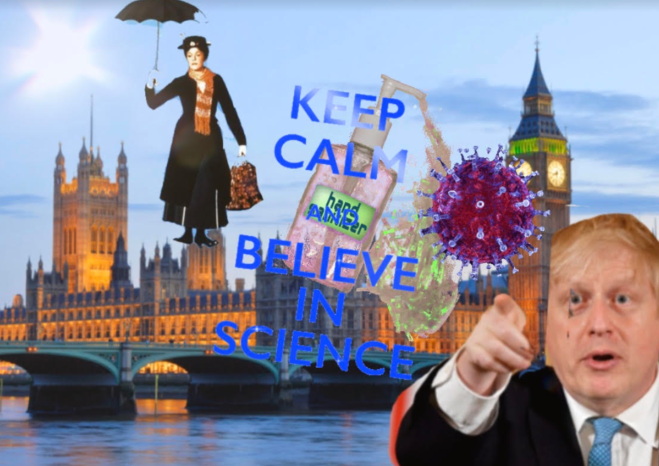 With the path of the virus blowing in the breeze as whimsically as Mary Poppins herself in the East wind that led her to 17 Cherry Tree Lane, perhaps she could have been the only match for it. Was destined to be, in fact. Being equally as–if not more–whimsical in her arbitrary landings, Mary understood something in the virus that she herself possessed. Of course, even Mary knew this was not the period to instruct the children–this time named Harry, William and Victoria (oh these Brits and their reverence for royals)–on having “tolerance” for the virus and its predilection for taking on the form of the reaper. It was a more jaded generation, and it was impossible to get them to listen to her or join in on an instructional song anyway, unless she got one of the graphics on their screens to do it. Or she herself jumped into the screen to perform a jig. This didn’t charm or delight them, so much as annoyed the shit out of them as they were forced to be distracted from whatever they were actually watching or playing. William, the oldest (naturally) at thirteen, was the most hostile toward Mary, constantly berating her as a “bitch,” “cunt” and “general git.”

It was perhaps precisely because of this that she was so eager to win over his affections more than the other two, who were just as blobbish but at least more docile, therefore malleable. And Mary, if nothing else, thrived on the malleability of children. Nay, their susceptibility to her. Again, it was just another commonality she shared with Corona, whom she would soon become acquainted with at the local pub, The Hag’s Arms, just a short walk from Cherry Tree Lane. She tried to stop in for a shepherd’s pie, only to find that the doors had been boarded up with a sign informing the public that the proprietor had died of COVID-19 and that the establishment would be “on hold” for the time being.

Oh, how much had changed about the Chelsea neighborhood since last Mary had arrived there in the twentieth century. Apart from the plague that had descended upon it. For one thing, there was a mosque. And a noodle bar called Phat Phuc. “Ridiculous,” Mary murmured to herself, as she thought of how far London had fallen since its Swingin’ Sixties heyday. She often wondered why she bothered to come back at all. Then again, Australia, where her creator had birthed her, replete with all of her magical qualities, wasn’t exactly calling to her at the moment either. It had been charred and was diseased as well. More and more, Mary was starting to come to terms with the fact that there was nowhere to “be.” Unless, of course, she decided to go ahead and do something about the state of affairs that had come to roost in LDN. Sure, she somewhat cared about the rest of “Dear Old Blighty,” but it was London that her priorities were set upon. And, after all, using her powers were quite taxing. It would have to be one city at a time, excluding, of course, the likes of Dublin and Glasgow. Those places and their kind could rot as far as she was concerned.

As she feasted on a plate of noodles from the aforementioned lewdly named establishment, she wiped the corners of her mouth neatly with her handkerchief. It seemed her “proper” behavior and mode of dress had caught the attention of a group of generic ruffians. She didn’t understand where these degenerates got the money to go out on their own unsupervised. Neither of the four could have been over the age of sixteen. Yet there they were, seated at a table right next to her bar stool, snickering and tittering away, obviously at her. She realized she might have changed her usual sartorial uniform to better blend in with the times, but then, why should she compromise one of the cores of herself as a person? No, no. She couldn’t dream of getting rid of her black boater hat, ankle-length skirt or “smart” blazer. Not even if a million more years past and society regressed back to its primeval state again. Which, clearly, it was starting to. Mary could see that.

And she could also very literally see all the giant balls of COVID-19 lurking around her in the eatery. A cluster was looming above one of the ruffians in particular, who coughed as a joke at his mates, thereby spreading the crown-shaped germs to them, setting off a new explosion above each one of their heads. Mary decided it was time for her to intervene. She placed her napkin on her disposable bowl, rose from her seat and got up to approach the “men” in question. “I beg of your pardon…” she began. The one who was called Lyle, and had spread his disease to his chums, laughed openly in her face. “No need to bother Ma’am. We’re not buyin’ what you’re sellin’. Go back to the nunnery then, yeah?” She took a deep breath, waved her umbrella in their direction and made all the increasingly massive balls of COVID-19 that were orbiting them materialize before their very eyes. The reaction was, to use understatement, one of complete terror and scandalization. They jumped up, all at once realizing that any abrupt movements would bring them in closer contact with the coronas. So they cowered instead, looking at Mary as though she had the power of God, or perhaps, more accurately, the Devil.

Lyle was the only one who could find the words to ask, “Wh-what do you want?”

Mary tsk’d at him. “Darling, I don’t want anything except to help. Would you like to be rid of this wretched virus or not?”

Lyle and his friends nodded emphatically. “Yes please, Miss. We’ll do anything you say.”

She rolled her eyes. “I don’t need a gaggle of obedient dullards. I ask for nothing in return…except perhaps a bit of common courtesy. A bit of garden variety human decency. Do you think you can manage that ‘going forward’?”

“Absolutely, of course,” Lyle assured. And with that, Mary was satisfied to believe him, waving her umbrella once more to make every single corona burst into flames and disappear into thin air.

“There you are, loves. Don’t ever forget that it is acts of kindness such as this that make the world go round. Which, I reckon, is why it hasn’t been moving quite right on its axis of late.”

Lyle and his mates nodded bombastically at her as she tipped her hat to them and the other grateful patrons before hovering out the door and flying high into the sky. She sometimes didn’t know if she was a witch or a deity, or something in between. In any event, she no longer had the patience to conceal her gifts from the masses at a time like this. She passed over Buckingham Palace and 10 Downing Street, finding that no one of much high power was actually there. It was then she had the epiphany that, at the very least, the Queen would be holed up in the outskirts, at Windsor Castle. Typical as it was for the rich to flee from the cities when the going got tough.

So it was that she held off on paying a visit until the morrow, using her time in the interim instead to tend to the umpteenth generation of ungrateful Banks children, who were so enraptured with the Orwellian accoutrements of the twenty-first century that they could not even be bothered to appreciate her latest magical coup as she made the coronas dancing above them disappear as well. Maybe she ought to have let them fall ill to teach them a lesson, but unfortunately for revenge purposes, she didn’t have a petty bone in her body. Just another petticoat to hand wash before putting her best foot forward to ensure the safety of the royals. This, she decided, would be her method for helping all of Britain at large. For she could already intuit a number of the prized members of the monarchy besides Charles had fallen (or would fall) ill. And if the Queen was lost to this as-of-yet-incurable-by-scientific-means menace, then the country would have no morale to persist. To keep fighting the good fight as more restaurants shuttered and, worse still, the football matches were cancelled. Boris had held off longer than most, indeed, any other country on the continent in terms of shutting everything down–though that was perhaps in keeping with the ideology that Britain was not Europe, was an entity unto itself, as was the skewed thinking of imperialists who could not, for whatever reason, deprogram their mentality from so many centuries of acting a certain way.

Mary felt that, at the very least, as a sufferer of the British form of colonialism that led to the existence of Australia (because the British were never ones to let the Dutch usurp them), she had more empathy. As a rule. Which was possibly why she had spent the last ten years lending her services to children in Spain, Portugal, Italy and Greece. And though many of these children found her manner cold–abrasive even–she knew they appreciated her more than any British child of the present century ever could. Still, she had, like so many, a foolish and inexplicable loyalty to her roots. And she could not simply abandon her brethren in their time of need merely because they had devolved to a point of relying on Boris Johnson for leadership. She needed to act quickly.

Hovering above Windsor, Mary could see the Queen as she ate a freshly laid, strategically picked egg. Even in times of crisis, “normalcy” must still be enacted at the royal residences. To dispense with such luxuries would be to descend into true chaos. Mary arched her brow at this line of thinking, but, at the very least, maybe the Queen would offer her some breakfast after she showed her what kind of cleaning she was doing. The kind that could not possibly have a price put on it. She explained as much to the affronted Queen and her arsenal of bodyguards after she manifested just how many trace coronas were in the air. “Do you understand? I’m trying to help you, Your Majesty. And I need to do so by residing here at the castle with you until a viable vaccine is unearthed.”

She blinked in her unaffected Taurean way. “Well then, I reckon Eugenia here ought to start making up a room for you.” With that, nothing more was said as the Queen resumed her dainty consumption of the egg on her plate while Mary proceeded to eradicate the coronas bopping around in the room.

The Queen looked at her with an approving glance, breaking her silence just once more to query, “Is there anything else I can do?”

“Keep calm and believe in science–and by that I mean the magic of me.”

So it was that many British citizens were kept alive slightly longer than they would have been were it not for Mary’s distinct wizardry in being able to render COVID-19 visible before eradicating it completely within the confines of the castle. For, in the end, a Brit gets their lifeblood from the Queen’s, n’est-ce pas?