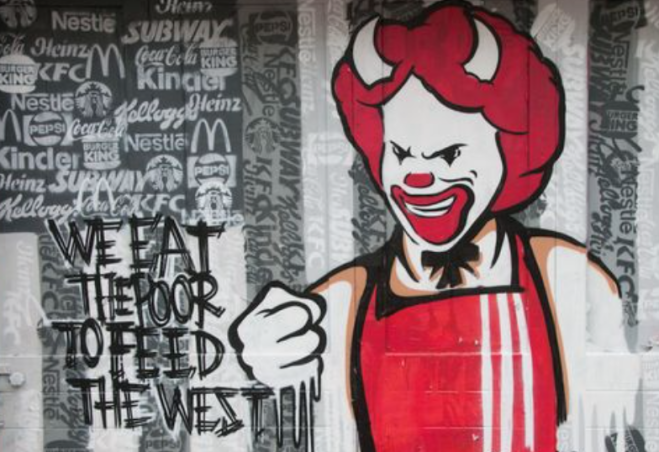 I don’t believe Benjamin, not at first. After all, someone named Benjamin isn’t all that trustworthy. I don’t care how anyone tries to defend that belief by positing Mr. Franklin as an example of a perfectly “upright” and “filled with integrity” sort of fellow. This Benjamin was nothing like Franklin (who was a philandering prat himself), and if I ever see him again, I’ll tell him as much. We were just out of college and back home for the holidays. Being that no one else seemed to feel morally obliged to return to the town for the sake of their families (perhaps because they had all found “real” jobs), Benjamin and I found ourselves turning to one another as part of the limited social respite we could afford each other.

At around noon on a Tuesday before Christmas Eve, while his parents were still at work (and his siblings full-stop absent as they had no intention of returning–instead opting to spend Christmas with their significant others’ families), I showed up to his posh residence. It was a massive four-story structure, equipped, most importantly, with a steam room and indoor pool. That’s what I needed in this moment. Some baptismal attempt at cleansing myself, my feelings of reluctance about being back in the place that made me feel so utterly mediocre. Benjamin didn’t let me access the pool right away though. He said he wanted to show me something. I shrugged in resignation and followed him up to his room, all the way on the top floor.

The stairs looked like something grand that would be on an MGM set to elucidate the dancers were ascending into heaven as they tap-tap-tapped their way up each step. They were crafted of white marble, with gold railings featuring leaf and vine-shaped flourishes. It made me truly disgusted with envy that Benjamin grew up in a place like this–but maybe my disgust was over the fact that he never invited me to “play” while we were in high school. I had become too uncool (and too poor) for him by then.

When we finally reached his red-toned room (decorated in the regalia of all his various sporting accomplishments), he told me to sit on the bed and warned, “Olivia, what I’m about to show you is going to shock you.”

I laughed. “What are you? The narrator for The Twilight Zone?”

His seriousness made me uneasy. The thing I liked best about him was that we could joke around, but the aura of “life and death” importance that now surrounded him was making me feel heavy. As though I might cause the bed to crash right through all three floors below me. What he pulled out of his closet was a large, ancient-looking book. I suppose you could say it reminded me of the Book of Shadows from Charmed. I kept that thought to myself, taking into account that he was now in austerity mode.

“This book transports you, Olivia.”

“A place that goes by many names. Greeks called it Hades. We call it hell.”

“Isn’t that just what living in America is?” I quipped, forgetting to keep my witticism to myself for the duration of this conversation.

Benjamin looked at me disappointedly. “If you’re not going to take this matter seriously, then I can’t show you the other realm.”

He was really freaking me the fuck out by this point, and I was deeply regretting my bourgeois need to take a dip in a private, heated pool–otherwise, I might never have left Earth that day. But what happened instead seemed to indicate that my destiny was marked. My lesson about coveting delivered with a monumental smackdown.

“Fine. Benjamin. Why would I want to see ‘Hades’? This ‘realm’ is bad enough as it is.”

“Because if you see what might be in store for you, maybe you’ll change the way you act.”

She fidgeted uncomfortably. “Is the way I act at present really that ‘sinful’?”

“Yes,” he replied without hesitation. “The way we all act is. I’m giving you the chance, as one of the few friends I have who I think could be pure of spirit, to peek in on the ‘down below’ and see for yourself just how important it is that you change so you don’t end up there.”

I sighed. It was clear to me that if I didn’t go along with this, Benjamin was going to lock me away in the hidden dungeon (there had to be one in a house this size) and make me go to the underworld anyway. So I agreed. “What do I have to do?”

He beamed–the evil grin of the devil himself, it appeared, as though he was reveling in getting me to enter some binding contract. He then approached the bed, looming over me like a ghoul as he presented the book and said, “Open it to any page and stare into it, you’ll be taken there immediately.”

I tried not to roll my eyes as I opened the tome. I was still quite wary of this entire experiment. That is, until I gazed at the first sentence I could focus on and was instantly sucked into the book, becoming some warped, transparent version of myself as I was pulled in slowly at first, and then with unstoppable fury.

I supposed what I marveled at most was how ordinary–how exactly like Anytown, USA–hell appeared. I had to question whether or not I was simply outside somewhere in our own town. Before too much scrutiny could be given, I was greeted by the Devil himself, who looked merely like a college-aged white boy with scruff, dressed in the according banal attire of jeans, white Nikes and a solid dark green, oversized t-shirt. “Welcome,” he said. “I’m going to be the one showing you the apartment.”

He was acting like the son of someone who owned a building, and this was simply another way for him to make extra money. Too stunned to question whether he was really Satan (already knowing deep down that he was), I went along with it as though this was an improv class and not me ultimately being held against my will in Hell, USA. He showed me the apartment, which, evidently, I would be sharing with a number of other college-aged dudes. “But this big room is all yours,” he assured, as he opened the door to a rather massive (at least length-wise) space already equipped with a pullout bed. The blinds were vertical and cream-colored, one of the most depressing details about the room to me for some reason. It was then he told me, as though reading my mind, to look out the window and check out the view.

Upon first glance, it was stark ravingly ordinary. A gas station, a strip mall, a McDonald’s. It was as though everything quintessential about America had been plopped onto this very block. Then, all at once, the tableau shifted–as though a projector was simply playing a slide show against the sky. Subsequently, I could see key monuments from Los Angeles, San Francisco, New York, Chicago, St. Louis… and it slowly dawned on me that the iconography of the U.S. amounted to nothing much at all. It was tripping me the fuck out. I looked back at Satan (who had, by now, told me to call him “Stan”) to ascertain if he was seeing the same acid trip. His simper indicated to me that he was.

Without me asking anything, he explained, “Oh you have to understand. Hell is different in every country. It is a reflection of that country’s customs and aesthetics. So it likes to show you a little bit of the worst and most depressing things about America all the time. Even I’ll admit Hell, USA is the least agreeable location. Hell in Southern France is pretty nice.”

I felt like vomiting, and just like that, it was pouring out of me. Stan shook his head disapprovingly. “Really now, Olivia. We’ve only looked at the scenery here and you’re already yakking? Wait until you meet the people.” The wave of nausea I felt kept coming over me, and seemed as though it would be a permanent state now.

Stan was right. The people were worse than the scenery. They were fat, pasty and wearing clothes that amounted to cotton-poly blend tarps. And they all talked with their mouths full saying, truly, nothing. Just garbled words that made no sense. I now had no doubt that this was the real and pure version of hell, and that I had been, at the bare minimum, in the purgatory of existence before getting swallowed up in the book.

I turned to Stan and said, “Okay. Point taken. I’ll become a saint. I’ll amend every bad habit and thought so I don’t end up here. Now will you kindly let me the fuck out?”

Stan laughed. That diabolical laugh that few besides a demon can achieve. “Don’t you get it? Benjamin is dead. He bargained his own way out of here by trading himself for you. You who are even more valuable to me because you still have a soul. I won’t ask how you managed to do that at your age, but I commend you for it. Because now it’s mine.”

I was a fool. I should have never trusted a rich asshole like Benjamin to be a true friend. And so, as I sit here in my middling apartment sometimes overlooking a gas station/strip mall/McDonald’s and trying to avoid all potential “interactions” with the blobs out there, I can only tell you that the true moral of the story is to never put your blind faith in someone affluent.