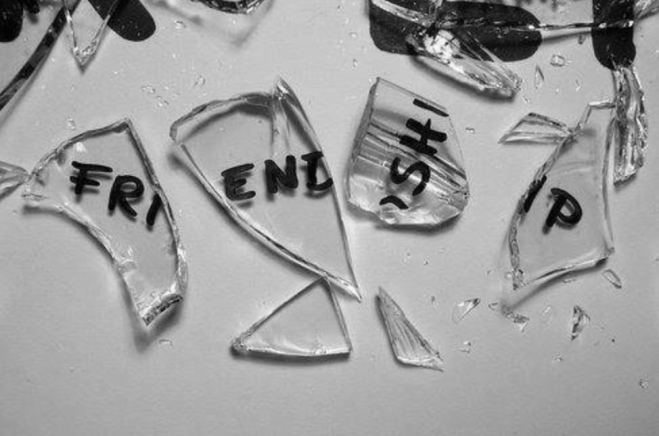 Two friends, both alike in lack of dignity. Except that, well, one of them managed to accrue slightly more when she chose to get vaccinated without fanfare. Without making it, somehow, about a matter of “freedom,” when, clearly, that’s never been something American citizens have really had to begin with. Though everyone would like to swear up and down that this is the country of “liberty.” If you’ve got the means.

That friend—the one who got vaccinated—is, of course, me. The other one was (or is, I suppose) a boy named Noah Friedland. An ironic last name when considering what drove us apart. You know, “freed land”—as in, the very thing right-wing extremists like to use as a means to justify why they shouldn’t have to get “the jab”: it’s a violation of their body and “fundamental rights.” Darling, the second you were born into this hot mess of a planet, you gave up any rights to something like “entitlement.” Even to the illusion of “choice.” At best, the only thing you’re entitled to on this Earth is not getting kicked (literally) in the crack for no reason—if you’re lucky. Noah, like the majority of white males (hence, their affinity for the Republican party), felt somehow entitled to more. Including the “prerogative” not to be vaccinated. I tried my best to ignore this quickly mounting discrepancy between us, never imagining that it would be the primary catalyst for our division. The final chasm to burst every fissure already present in our friendship.

The contention started out subtly enough, with me choosing to roll down my window when we were in his car together, even if he had put the air conditioning on. I did so because, while I had been completely vaccinated for months now, he was still deliberating on whether or not it was “the right thing” for him. Bitch, you’ve had so much unseemly cock up your ass and this is what you’re worried about? I wanted to scream. And because one of the very first major stories about the spread of the virus in the U.S. illuminated that being in a car with someone who had coronavirus was the surest way to get it, I took that to heart in my ever-diminishing drives with Noah. Eventually, however, this very “subtle” maneuver of mine to mitigate exposure is what finally set him off as he screamed at me for having the window open and “wasting resources”: his precious air conditioning. Another resource I had apparently “wasted” before that point was his hand sanitizer.

I had happened to need a dollop as I got into his car one day and he practically chewed my head off. As though it was “presumptuous” of me to think I could just use it without asking. But honestly, what the fuck is communally-presented hand sanitizer placed in a car’s cupholder for if not to be used for the taking? His bitch fits had most definitely gotten out of control ever since this whole “pressure” to be vaccinated arose. Especially in the state of California. But it baffled me that he—or anyone—could see it as a pressure when it was the only key to returning to some small semblance of the tactile life we had all once known. Not to say things would ever really “go back,” because now the fear had been irrevocably instilled (just as it was after 9/11) and the opportunity for more governmental restrictions was upon us. Republicans, laying claim as they do to “total freedom” (including the freedom of corporate laxity that allows for such capitalistic phenomena as oil spills and forever chemicals), seemed to view this as a “liberal conspiracy” to be staunchly opposed. Noah, to my chagrin, was revealing himself more and more to be just this type of Repub.

I don’t know exactly when he decided to ally himself with this party, especially being a gay man and all, but when we had first befriended one another, all the way back in our childhood, there was no such red flag for me to notice. For children are too “innocent” (read: they don’t yet have to worry about a life philosophy as it pertains to making money) to be bothered with such assignations. The only thing I recognized in Noah was that he seemed to be an outsider like me. Except that he was actually better at blending in—I see now that was because his personality was like oatmeal. You had to imbue your own ingredients (a.k.a. preferences) into Noah in order to make him even remotely enjoyable to be around. As we grew up and parted ways for a time when the college period came to roost, I could sense that our friendship was built on a very unsolid foundation. It took me until the arrival of this pandemic to fully understand just how unsolid. For it was based on, fundamentally, the old adage, “Misery loves company.” And, to be quite frank, he was the one who got off more on that understructure than I did. In fact, I wanted our friendship to not be so adversarial, something that seemed impossible whenever I somehow said something that managed to rub him the wrong way. He being recently “out” (though still totally repressed), that felt too easy to do…what with him seeming to genuinely believe that he had to play in so heavily to the “bitchy gay” stereotype.

Nonetheless, I continued to abuse myself by hanging out with him. After all, we had both ended up back in the same town we never thought we’d have to resort to again. There was a bond. That “misery loves company” bond. But the strain between us was becoming too difficult to ignore with each passing day and each newly-minted mandate that made it essentially unavoidable for anyone with half a brain to get vaccinated. And still, he would not budge. When I finally burst out into a rage after he snapped at me yet again for rolling down the window in his car, I thought maybe my rarely-sighted exhibition of a reaction might get to him.

Instead, weeks went past without any communication from him where once I was barraged with innocuous texts on a daily basis. It was as though he had vanished into thin air. Maybe he really did die of COVID. Me, being stubborn as I was and feeling I didn’t do anything wrong other than defend my right not to be exposed to someone more susceptible to the contagion, chose not to reach out. And the longer I chose not to, the greater the distance became between us. I had apparently allowed too much time to lapse in order to “make things right.” Yet I could tell it was part of some “little experiment” of his to see if I would give enough of a shit to contact him first. Well, how could I? It was liberation from an anti-vaxxer. Still, I often ponder when I happen to drive by his house: did you ever get vaccinated? And would it have even salvaged our paper-thin friendship anyway?