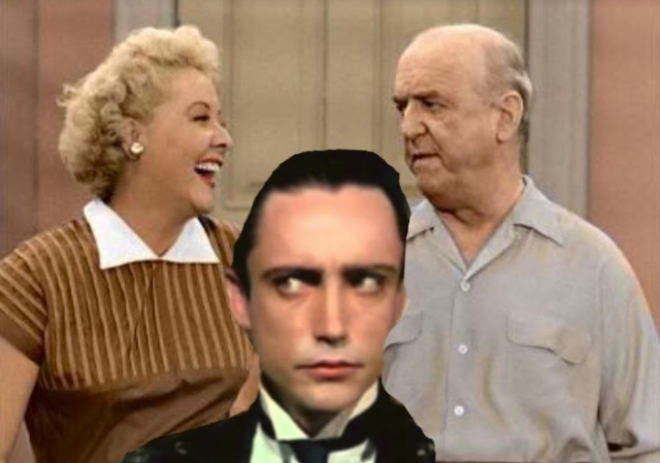 I’m hanging out in color with Fred and Ethel in some bizarre loft apartment that I can only imagine is somewhere in the more affordable part of the Hollywood Hills, which is to say, the bottom of them. They’re bickering as usual, and it makes me wonder how the fuck Lucy stands all this negative energy on the regular when she’s just trying to be a star and have a good time. I don’t think of Ricky, he’s always “busy” anyway. He doesn’t deserve that kind of attention when he gives so little to his own wife–that is, until she steals his spotlight.

In any case, when Udo Kier walks into the room, all my irritations melt away. I don’t know how or why he has managed to coincide in the same space-time continuum as Fred and Ethel. But it doesn’t matter. He is electric. A presence both calming and rabble-rousing. I don’t really know what to say to him. After all, I’m just a dimension jumper with no wealth other than my memories of alternate realms. Mercifully, he does all the talking with his urging: “Beware! Our demons and idols will pursue us until we learn to let them go.” That’s all he says. He doesn’t bother introducing himself or asking who I am, why I’m there.

Just when I’m starting to get used to Udo’s methods, Fred walks in on us, and for some reason thinks it’s appropriate to remove his belt and unbutton his pants. Luckily, Ethel comes in noshing on a box of chocolates and entirely kills any boner Fred might have developed. This, however, does not stop her from sharing her chocolates with Fred as they sit on the ground and watch us finish. Udo removes himself from his position on my body and is immediately clothed without actually putting them on. I pull the sheets, somehow stained with blood, over me, waiting for the moment when Fred and Ethel, latent perverts that they are, finally decide to leave the room. And it is only when they run out of chocolates, what feels like hours later, that they do. I have no idea where Udo has gone to at this point, deciding it best not to join Fred and Ethel in their TV dinner of Swanson’s peas, mashed potatoes and chicken. In fact, I almost feel it’s somehow traitorous to their original I Love Lucy advertisers.

Still wrapped in a sheet, I pause to look out the window, wondering if I’ll ever find someone like Udo again. I walk out of the building limping and one of the desk attendants, an attractive blonde who could be either 28 or 18, smiles at me. “He’s great isn’t, he? Like therapy or something.” Udo, you dog. I think to myself. I thought what we had was special. But then, why would it be? Maybe I’ll run into Joe Dallesandro next time. Fred and Ethel always seem to be inviting derelicts into their apartment these days.