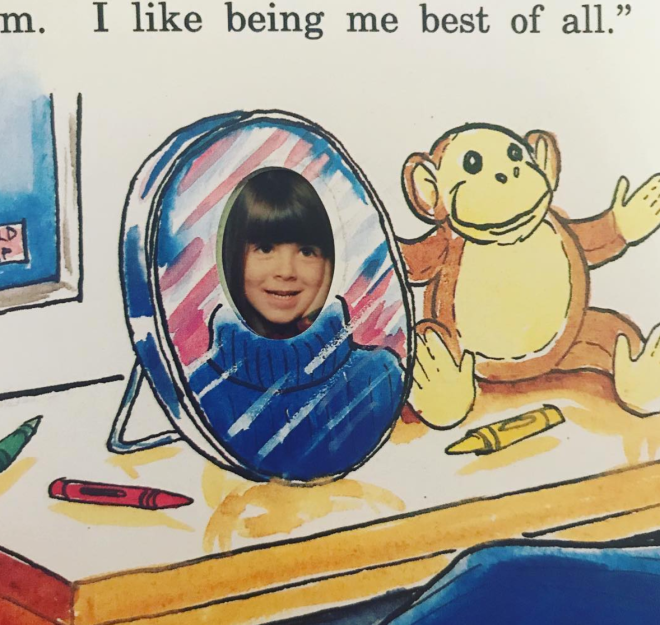 In the early 1990s, novelty children’s books were a thing. The kind you could personalize to make the story about yourself. By this, what is meant is that parents could send a specifically sized 5″ x 8″ photo into All-Star Kids Publishing and, in six to eight weeks, receive a fifteen-page book narrating the story of little Jenny or Corey or Kelly or [insert some other dated name of the era here]. One supposes the idea was to make each child feel truly unique and special. This could very well be one of the reasons millennials would later get the reputation for being delusional in their self-perception. Cora Cabot, just five years old when her parents, Marc and Tamara, decided to get in on the trend, was an absolute fool for the gimmick. They wanted to cheer Cora up after her older sister, Abbie, decided to go and live with her biological father in Madison, Wisconsin, a long way away in distance and climate from the sunshine of Pasadena. Though Abbie was her half-sister, they had always been close, the three-year age difference allowing for them to have much in common.

Dealing with the sadness of this loss, Cora had become less communicative, and increasingly engrossed in the fantasy world that her library of children’s books provided. It was the only outlet into a world that made sense, where happy endings were a dime a dozen, instead of the few and far between ratio that reality was serving up every day. So when Tamara saw an ad for the service in Highlights magazine, she didn’t hesitate to pay the $39.95 fee it would take to potentially heal Cora with a story centered around an adventure she would take with Abbie. That’s one of the few details Tamara provided to All Star Kids Publishing, in addition to a desire for the setting to at one point include a jungle tableau. Cora was very into The Jungle Book right now–the actual book, not the Disney movie. Thus, whichever ghost writer might come into contact with the project would have to oblige the request. Indeed, one imagines Spike Jonze loosely getting inspiration from this bizarre job for Joaquin Phoenix specializing in the creation–generation–of love letters in Her.

When Marc expressed concern over the potential self-involvement this book’s arrival could instill in Cora, Tamara rolled her eyes. “I think this will be a really great way for her to feel close to Abbie right now. Don’t you want her to start engaging more with other kids? This is a first step toward that.” Marc sighed. “Maybe you’re right. I don’t know anymore what to do. How to talk to her.”

He said this as he went through the mail, hiding a credit card statement he had just opened in a drawer as Tamara turned her back to prepare a portion of their dinner at the sink. The credit card statement, had Tamara ever been privy to it, would have quickly revealed a number of hotels across town that Marc had been taking various prostitutes to. He didn’t like the “dirtiness” of sex in cars or public places, so he always sprung for a hotel. This is something Tamara would never find out about during their marriage, which would last until Marc’s death in 2015 from a severe heart attack. Being of the French descent, he loved cheese more than his arteries.

The book arrived, as promised, within the six to eight week time period, veering of course toward week eight. And it couldn’t have come a moment too soon as Cora was almost completely mute at this point, only agreeing to talk when Abbie was on the phone or when she needed to request one of her stories to be read out loud to her. Tamara excitedly ripped open the envelope from All-Star Kids Publishing and ran up to Cora’s room to show it to her.

Cora looked up from the current book she was reading in surprise, for on the cover of the literature her mother was holding was an image of her and Abbie with the title Sisters’ Voyage Through the Jungle. For the remainder of her childhood, this book served as a security blanket for Cora, vindicating Tamara to Marc. She began to come out of herself once again, the comfort of the narrative giving her the confidence to trust anew. In the final lines of the story, Cora declared, “I like being me best of all,” after pages of trying to escape from a dastardly lion in the jungle with her sister, all the while convinced that if she was somebody or something else, her problems would vanish. But in every scenario in which she swapped bodies, something equally as or more unpleasant would befall her. It was as such that she learned to make peace with herself and her present situation. As the years passed, she grew accustomed to only seeing Abbie once a year, carving out her own lone existence in Pasadena by focusing her energies and passions on being the editor-in-chief at her high school newspaper, and later at Occidental.

Now in her twenties, Cora was saddled with the task of tutoring a seven-year-old girl struggling with reading comprehension. This was one of the many jobs she had taken up in New York. For the rule goes: those born in L.A. must move to New York. Zara was an only child, and a bit spoiled–it goes with the territory. But Cora did her best to try to make reading fun. An oxymoron to the current generation, the divide between which Cora couldn’t have possibly anticipated. She assumed she was still young enough herself to relate to the new batch of youths outnumbering us all. When Zara insisted that she didn’t know what the homework instructions were referring to when it said to write three things she’d learned from “the text,” Cora decided to improvise. Because of her sentimental nature, she always carried with her in her purse Sisters’ Voyage Through the Jungle. Thus, she took it out as an interim reading material for Zara to study, not making mention that the girl in the illustrations was her, now unrecognizable as the same person in her current state: bleach blonde hair, too much makeup and too many tattoos. So unconcerned with the details of anyone’s life but her own, Zara didn’t bother to ask anything about the book, why Cora had it.

As Cora read each line slowly to Zara, she could see the boredom in her eyes. Was the story only meaningful to her, because it was about her? She supposed maybe every writer asked herself that when she wrote something blatantly autobiographical for all the world to see–or rather the three to five devoted readers interested. In spite of Zara’s lack of interest, Cora got through the whole book as the former seemed to squirm in agony–as though learning of any kind was a torture. Afterward, she wrote down several questions about the story to test what Zara had gleaned from it, if she could take a reading comprehension test at her school and successfully pass. But as she wrote the questions, Zara insisted, “You don’t have to do that. This isn’t part of my homework.” “I know,” Cora said. “But I just want to see what you learned from the story.” Zara used some scissors on the table to cut up an eraser, musing, “Ugh, I didn’t learn anything. That story was stupid.”

Cora nodded to herself. She had never felt so old and irrelevant in all her days, as though the magic she saw in things when she was a child was completely inane–the mark of her own daftness. Then she decided, no, it couldn’t be her. Kids become progressively desensitized, more heartless and selfish with each new technological invention made during their childhood. Or were we all that way once, too–and have simply forgotten the joys of egotism?