Like Italians pronouncing everything in English with an “a” in between each word, the false stereotype(s) of Taurus has simply got to stop. There are only so many “jokes” and memes referencing the Taurean tendencies of laziness, self-involvement and materialism that can be taken in stride–call it a characteristic of being a Taurus if you will, to be easily miffed (except for the fact that our patience level is far above and beyond that which you deserve, especially when it comes to tolerating your over emotionalism in all aspects of no actual import).

Considering the viral nature of yet another Instagram account, @notallgeminis, it bears noting that most of the Taurean memes in existence are a grotesque cliche, painting us as open-mawed fatsos with no self-control. For those of you blinking absently right now as though to say, “Well, yeah, that is what you are,” consider yourself summarily poked in the scrotum and/or ovary with a bull’s horn. And for those of you who seem to have forgotten, there is a reason that Taurus was associated with Zeus in Greek mythology (no, not because we’re sexually greedy/depraved assholes): because we’re old and authoritative. We have the “been through all this shit before” aura about us that is, in part, what makes us have both so little and so much tolerance for other signs’ frivolities. Among such frivolities being a lack of loyalty, devotion or commitment to anything beyond that which instantly gratifies them (long-term relationships signifying forever not being among such gratifications).

This is, quite possibly, the primary thing that makes life so hard for the “what you see is what you get” Taurus, who only asks but one “favor” of their fellow human: don’t be further proof that this world is filled with nothing but fucking flighty ass, reneging little pieces of shit that aren’t fit to float in your gold-plated toilet. Or what people assume is your gold-plated toilet because of your love of decadence. Ah, but alas, the laziness of Taurus keeps them in rags so ill-suited to their delicate skin and psyche–far outweighs their lust of money and material, isn’t that right? In this Taurean’s case, most assuredly. Or rather, the things that I value and enjoy reap no financial rewards considering all the time invested into them. Hard work is not hard work unless you have something concrete to show for it–like a burgeoning bank account. This is one of many reasons the attacks on being a Taurus and their monetary-based wants at war with their dreary reality have got to stop. 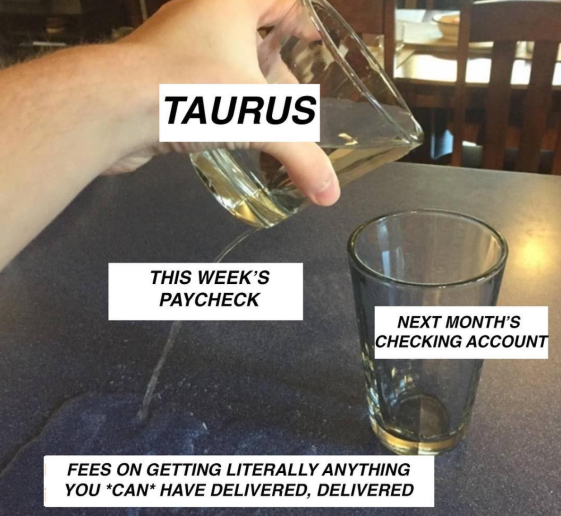 The only sign that potentially has it worse in terms of bombastic stereotypes and associated vilification is Scorpio, the polar opposite and therefore often most compatible with Taurus (except those in between parts when one of them is trying to exact revenge on the other). But, at the very least, Scorpio gets the positive stereotype of being good in bed–what does Taurus get? Pigeonholed as being adept only in the art of chewing cud. “Dependable”–like your preferred couch cushion. Well, maybe it’s time to stop depending on Taurus to always be there, to be your last resort for when none of your other “friends” or lovers in the zodiac spectrum show up. If you’re so fucking bored by our “practicality” and constant “criticism” (the truth will set you free darling), then maybe it’s time to seek the insufferable mood swings of Cancer and Pisces or the grotesque narcissism of Aries and Leo. Or the even more boring in their “egalitarianism” Libra.

One thing you’re always going to miss, however, is our looks. Sure, there are certain aesthetic cliches that ascribe to the sign’s food-loving stereotype (e.g. Adele, The Rock, Aidy Bryant, etc.), but for the most part, the examples of Taurean greatness and outside-of-timeness in terms of age and beauty (e.g. Cher, Janet Jackson, Grace Jones, Michelle Pfeiffer, Megan Fox) remain the primary attributes that stereotypers so often like to “forget.” Maybe because our detractors can’t stand that we have the ruler that matters most: Venus. This is where the bulk of all our pre-molded memes and accusations come in–those shading us for preferring to be comfortable, for having an unhealthy obsession with that which pertains to vanity (even male Taureans are known to succumb to Botox on a regular basis). And, in our usual manner of paradox, being unhealthily consumed by food and strategies on how to get it at the same time as absolutely needing to appear physically perfect.

This, however, is all part of the smear campaign against the only sign in the whole damn constellation that you can count on to think of someone other than themselves–despite being portrayed as a vainglorious, materialistic cuisine-monger. Maybe if we didn’t all spend our credit card maximums attempting to show you how to have a good time, we would actually have a house to fill with all the overpriced accoutrements of wealth we’re supposed to be known for coveting. Or maybe if we let just any old buffoon with no intellectual or visual value into our lives, we could be as blissfully “happy” as the other signs, who, in between settling for menial jobs and menial people place no value on art or any such offshoots that make life feel even vaguely meaningful.

So fine. Accuse us of being decadent divas that stuff our faces like Marie Antoinette while everyone else starves. Of being overly “cautious” in matters where we should be emotionally reckless and overly reckless in matters where financial cautiousness ought to be employed. This is precisely why the dichotomy of Taurus cannot be hemmed in by these slanderous and libelous imputations against our character. Yes we want it all while doing what is deemed nothing at all (though let’s see you try to be this fucking fabulous with zero dollars in your pocket). But we also give it all while doing nothing at all. So, yes, you can try to sully our reputation all you want with your overblown attributions and lies about who we are as people, but like the bull that speaks for our kind, we will not budge until provoked to the point of raging to kill.