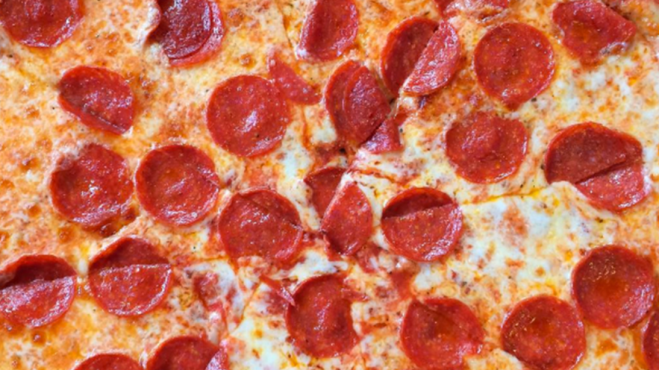 “Part of me,” I tell him, feeling judged for my too regular ordering of pizza from the same establishment. And yet, has embarrassment ever stopped anyone from pursuing what their heart truly desired? From diving face-first into a vat of liquid humiliation? As for myself, I had reached the point of inebriation wherein all I could think about was swimming in the heart attack waves of cheese spread on too thick, the overly salty pepperoni I could dance on like it was its own miniature ballroom. Yes, I was properly, properly drunk. And when this level of drunkenness couldn’t lead to fucking, it simply had to run its course in some other form of indulgence: food. Food of the very best and very worst kind. Dickensian sustenance, you might call it. For me, it seemed, the only loyalty I had to anything in my life was pizza. And yes, I’m aware of how unoriginal such a commitment is, how utterly bland. It was a prosaicness that has almost compelled me to turn my back on pizza many times, yet I could never stay turned away, was always beckoned back like the glutton I was. The need to consume, consume, consume while I entered states of unconsciousness had long been a part of my nature, ever since the time of high school when I first began imbibing as a means to stave off the iron curtain of repression put up by my mother, who, in her state of singledom, would only converse with me if it was to inform me of how much money I was costing her, and how little of a return she imagined she would be getting back on her investment based on what she could tell of my “talents” thus far. And oh how she wanted me to have the kind of talent that might later be marketable, spending her hard-earned cash as an “account executive” in one of the only ad agencies within our beta–nay, gamma–city on everything from tennis lessons to singing classes to Spanish courses (“If you’re ever going to get a job in California, you need to learn Spanish!” she warned). But none of them seemed to help me “tap into my potential,” hold the key that would “unlock the door to my moneymaking a.k.a. fame likelihood.” When my mother could see that she wasn’t going to get a dime out of me later on in life, she sort of started ignoring me full-stop, decided I was no longer worth her precious, miserly-spent breath. And that’s around the time I started talking a lot to the bottle. Sure, I drank in the accepted social settings of parties and in parks in the middle of the night after sneaking out. But I didn’t have to be around people to pop open the vodka, the wine, the gin, the whiskey, the tequila, what have you. All I had to be was conscious, and it would be my mission to reach that higher state of nonexistence. Because that was what a blackout was–is–to me. If I’m not sentient, I don’t exist. And so often, that’s all I want without the total pledge to suicide, which was a concept that, in my inability to devote myself to any one thing or state, didn’t suit me. So I drank. And ate to mitigate the next day effects of that drinking. It’s just that the me that was blacked out, the non-sentient me, was the only one who knew anything about it. The way I looked at it, it was her business, not mine. She was behind the control station when alcohol was pulling the strings, so I accepted that. It all goes back to the classic philosophy question, “If a tree falls in a forest and no one is around to hear it, does it make a sound?” In my case, it was, “If you order and consume an entire pizza in blackout mode, did you really order and consume an entire pizza at all?” No, I maintained. You did not. I did not. However, there were certain telltale signs of the behavior I had unknowingly engaged in the night before that would haunt me the following day. Like oh, say, yakking up what I had consumed against my better judgment while in the bathroom stall at work. Because yes, despite what Mother believed were my limited capabilities, I did manage to finagle a job. In an office. Just. Like. Her. Office worker was the new mediocrity, in a way that server used to be. But now, in truth, it rather seemed like being a server might be more glamorous. Or at least more dynamic. Shit, maybe you could even make more money than I was if you worked the right scene. Somewhere in Venice Beach or Beverly Hills. Then again, I would probably be too tempted to get drunk and eat in a setting like that. The office life forced me to “stay grounded.” Reserve my vices for the evening.

After fleeing from our suburban town, L.A. had lightly welcomed me into its arms by presenting me with an affordable apartment near the LaBianca house. One that was starting to become less so as people, in droves, all at once seemed to apprehend how “magical” the city is. I was just here for the debauchery. Craving an experience antithetical to the one I had in my youth.

And it was antithetical to my mother’s lack of nurturing to hear someone dripping with concern when he asked, “Renee? Ordering again so soon?” I had already, evidently, ordered last night. When I awoke the next morning, the only trace of my gastronomical faux pas was the semi-opened box (yes, empty) on the counter. And well, one supposes, some evermore forming cellulite on my thighs, not so resilient to the food I could once put into my body without a care in the world. It meant I would either need to stop turning to pizza for comfort or leave L.A. and move somewhere that was more tolerant of a doughy physique. Perhaps the birthplace of pizza itself: Naples.

It was when I took myself up on this offer to move there that I suddenly found I wasn’t as allured by the drink anymore. Sure, I imbibed, turned my mouth into a sluice if a bottle was made available. But I didn’t seem to seek it out any longer, didn’t seem to need it to fuel my very being. And I started to feel okay with sentience. Feel like I ought to cherish it as opposed to avoid it at all costs. Plus, now, there is no such thing as pepperoni in my town, and I think that’s what’s been keeping me so much thinner these days. Well that, and all the walking I do as a prostitute in Secondigliano. But if no one I know sees me walking the streets as such, then am I really a whore?