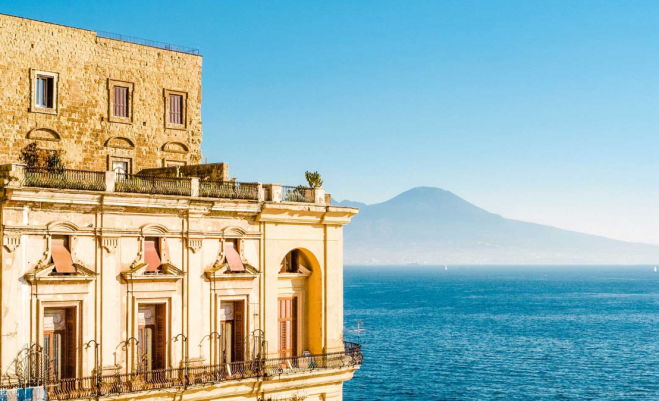 That patch, right there. That’s where it happened. That’s where he fucked me. That’s why this rooftop will forever be tainted. Colored not just with the gray tint of concrete but with the red undertone of failure. A stain. A blemish forever emblazoned on my hippocampus. It was once a hallowed getaway rife with a child-like innocence now rendered into but a memory of one of my greatest so-called adult failures. Had I known I would be damned to this place, this “castello” on the shore of the Bay of Naples, I might have thought twice before throwing caution to the wind, along with my clothes as we engaged in the missionary position in, I suppose, an homage to Catholic country.

The house had been something I “applied for” on a lark. One of those homes for just a dollar in Italy you always see Condé Nast Traveler advertising. Except, miraculously, this one wasn’t laden with the catch of being overly remote and in a location where refugees go to die after their long and fruitless journey from Africa. No, it was in a prime location overlooking the water–the caveat being that the casa was typically dilapidated. The plumbing barely functional, the heating and air conditioning nonexistent. At first, I didn’t want to tell Nathan about my good fortune. He had a tendency to leech on such things and I wanted to believe that his reasons for being with me were because of me. Not what I could potentially give him from a material standpoint. But in the end, I had to make the confession. I had to find a way to keep him with me for the summer so that he wouldn’t go cavorting with his friends on a trip to South America. What the fuck is it with guys and trips to South America together? Like, do they really think it’s that roguish and impressive? Try fucking Siberia. In any case, as he started to infer that he might be interested in joining Johnny and Jimmy or whoever on their little excursion, I blurted out all at once, “But if you go with them then we can’t enjoy my new vacation home in Italy.”

He blinked at me in disbelief, then beamed, a smile that spread from ear to ear, as they say. Thoughts of South America–and the many whorehouses therein–seemed to melt away from his brain, replaced by new plots of tanning on the beach while face-planting into a vat of gelato. He had no idea that it wouldn’t be quite so picturesque. I didn’t have the heart to tell him that we’d be staying in what amounted to a ramshackle. For yes, there’s a reason something costs a dollar. Mind you, there were other red tape fees and taxes I had to pay on the property, but it was mine, all mine. And I could stay there forever if I wanted. Hide out and avoid the realities of what it meant to be a couple in the thick of a capitalist milieu. Italy was anything but that, the chaos of Naples enveloping you into its fold the second you set foot in the perpetually traffic jammed town. But if I could use the city as a distraction for the core issue I wanted to avoid–Nathan and I weren’t going to last–then maybe we could stay together for eternity. Or at least through the summer when he had to get back to his teaching job at NYU. NY fucking U. Where he predictably taught English literature and relished the flirtations of his more idiot students. Because you sort of had to be an idiot to go to NYU anyway, that was really saying something.

As Nathan excitedly packed his airline-approved for carry-on luggage bag (he was annoyingly meticulous that way), I could feel the onset of a panic attack coming on. We had never taken a trip like this in our four years of living together. Had never sequestered ourselves in an environment that allowed us solely to focus on “just us.” Theoretically we would have the internet but who knows how strong the connection would be (turned out, just slightly stronger than the one between me and Nathan by the end of the soggiorno). I wanted the trip to mend us, not further break us, and now I wasn’t so sure that would be the final outcome as we boarded the plane to the tune of Taylor Swift’s “Blank Space” playing over the intercom. I didn’t even think they still played music over the intercom outside of the 70s. Maybe it had been too long since my last plane ride.

Taking an overpriced cab from Capodichino, we arrived in the small hours of the morning, a rare portrait of a city unburdened by its loud and overbearing population. It was almost as false a representation of the town as the one I gave to Nathan of what our accommodations would be like. I somehow managed to evade showing him any pictures simply by talking up its prime proximity to the shore. Despite the fact that it wasn’t exactly prudent to swim in the water, and most Neapolitans with any good sense did their best to journey somewhere further down the coastline to take a dip. Nathan didn’t need to know that, and a sadistic part of me wanted him to find out the hard way when he emerged from the water packing some form of gangrene.

Left at the doorstep by the driver, Nathan and I looked from one another to the “house,” in essence, a turd pile of bricks put together with spit and glue (but hey, there was a rooftop!). We walked in wordlessly, too dazed from the lengthy hours spent in a tin can to bother complaining at this very moment. We plopped our suitcases on the floor and crawled into the separate twin beds that had been placed side by side. “Charming” did not exactly live up to its promise.

As the weeks went by, we both settled into the same domestic roles we had in New York. I with my cooking and cleaning, he with the writing of his novel that would never see the light of day. We could almost ignore how shitty the situation was if we just blacked out and powered through it. There were even occasional instances of tenderness as we were forced to rely on one another as each other’s sole source of companionship thanks to the language barrier between us and everyone else. Usually, Nathan was adept at striking up conversations, ergo friendships, with strangers, but it proved too arduous in this particular city, where English was not so widespread, but hand gestures were. Nathan was not a gesturer. He was too waspy for that, thus he resigned himself to reading and writing or being forced to talk to me to get his daily fix of socialization. I could tell he wished he had gone to South America.

When almost a month had passed without us having sex, I finally felt compelled to say: “What the fuck is going on, Nathan? Why haven’t you touched me since we got here?”

He sighed heavily as he finished typing a sentence with a bombastic flourish. “If you must know, this ambience hasn’t exactly put me in the mood. If anything, it’s turned me off of sex altogether. You think I can feel eroticized as the pipe leaks god knows what onto me from the ceiling?”

“I don’t care–just as long as your fucking pipe leaks something onto me. And soon.”

When I look at that patch we were so fond of now, all I want to do is pour bleach over it and set it on fire. I truly thought it was the turning point for us. That we had at last come to a “good place” in our relationship. But when Nathan informed me he would be cutting the trip short to return to New York for some “pressing business” (a.k.a. the business of pressing his wang into another) I knew he was still unsatisfied with me. That he needed to cheat. I wanted to argue; to scream at him; to ask him why I wasn’t enough. Instead, I looked at him with somber acceptance as I nodded my head in agreement that he ought to leave. “Get a jump start” on preparing for school. Yeah, I knew how he fucking prepared for school.

I was only to have two more weeks left remaining. Now all to myself. I spent some days wandering the nonsensical streets and taking in the sight of old Italian women wringing out the clothes before hanging them on the line, almost with as much abandon as they likely once hung their own heart on it, only to have it blown away and pummeled into oblivion by the arbitrary passing of a motorino (a reckless motorino of course being a metaphor for a man). In their eyes I could see something tragic had happened to make them this complacent with their lot in life. It hit me so hard that I had to look into my own eyes that night in the mirror–the one I had to purchase from a random store that also sold cheap Chinese everything–to see if the same transformation had occurred within me. I felt that it had.

On the day I was slated to leave to return to New York, to my life with Nathan, I didn’t. He seemed receptive to my attempt at ghosting as he replied with: “Okay, if that’s what you think is best for you.” So I decided to simply stay and stay at that dollar casa, accepting my fate as a tragic Italian woman with the blemish of our time together forever emblazoned on my hippocampus–and on the rooftop. That is, unless I rubbed it out with that aforementioned bleach and fire method…