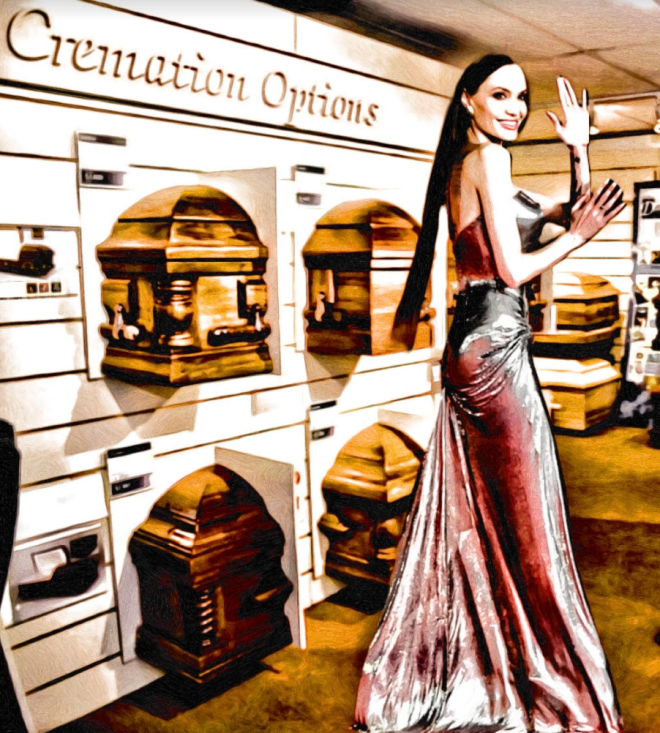 Before she returned to the pursuit of acting aspirations, she was on a steady (by her standards) path to becoming a funeral director. Which came as no surprise to Billy Bob later on. She was, after all, the one who had insisted upon writing, “To the end of time” in all caps over their bed frame. Using her blood as the ink. Macabre was the Angelina way, long before Daria, long before Aubrey (who merely comes across as precious in comparison to the others). In the end, BB couldn’t take it. No man could, Angelina decided.

She was feeling moodier than usual today, a combination of unwanted wistfulness and the time of year: Halloween. Once upon a dream, it was her most cherished seasonal holiday. In the present, saddled with a gaggle of children that seemed to despise her as much as she had once despised her own parents, she wasn’t feeling as festive. That didn’t mean she was going to spoil the fun for her children as she dug through the closet and searched for a specific item that would be perfect for one of their costumes. Where exactly did she put that spiked leather collar she had bought all those decades ago? Around the moment the “Thriller” video first appeared on MTV.

Rummaging through boxes of her ephemera, she came across the last thing she expected: the 1987 Funeral Service Institute Handbook. In a flood, the questions and answers came pouring back to her. The flurry of queries that unapologetically pertained to Catholic rites. She herself had been Catholic, or so she was told. It didn’t take Angelina long to rebel against that institution. Another question that flashed through her mind was, “Which of the following funeral rites is conducted without the presence of a casketed body?” She chose “traditional or complete cremation service.” Oh what might have been. If she had continued down that path, the one that might have led her to open Angelina’s Funeral Parlor on Fairfax or something. Her services would have been sought after, possibly even more than they were for acting. And, in a way, the humanitarian bent her life had taken would have done so in a more natural manner by becoming a funeral director. For what could be more humane than handling the dead (particularly the celebrity dead) with dignity?

In the background, she could hear one of her kids blasting Billie Eilish. It was “Bury A Friend,” the new “festive” favorite for Halloween. Ange found herself annoyed that she was no longer even permitted the luxury of a proper, full-blown reminiscence without it being interrupted by the loud fancies of her various spawns. And here she thought she had purchased a house big enough to keep them all at bay. She was starting to think she had too many children. All as a means of overcompensating. Of replacing one addiction with another. Rather than cutting or shooting up, she had channeled those habits into collecting kids. Wasn’t that the healthier choice? She had believed it to be once…but now, she wasn’t so sure. The children had turned her into a girl, interrupted… ad infinitum. And there was no period during which that was more evident than the month of October. A month that had formerly been sacrosanct, untouchable. She used to balk when she thought about how Winona and Christina believed they were such hot shit on the “morbid front.” The sole talismans for the public to turn to when they required a grim mascot with a waif’s body. Okay, so Winona was older and her actual birthday was right near Halloween, which sort of gave her a leg up on being “grim,” but that didn’t change the fact that Angelina had genuinely wanted to be a funeral director, for fuck’s sake. What more “ghoulish” credibility did she need to outshine these other two pale-faced pixies?

Shoving the Funeral Service Institute Handbook back into the box from whence it came, she decided she was not going to lend her spiked leather collar to her daughter, who, honestly, was trying way too hard to be her. Ange’s unwitting sense of mother-daughter competition (neck and neck with the form of competition that could arise between two sisters) reared its ugly head just as said spawn walked into the room to demand, “Did you find it?”

Ange quickly shook her head no and insisted, “I must have given it away. We’ll have to find you a new one.”

“But Mo-om! What about upcycling?”

“I tried,” Ange responded tersely, hoping the little bitch would take the hint and leave her to her own devices again. When she instead continued to stand there gawking, Ange announced, “You know what? I’m going out… to find what you need. For Chrissakes, we can’t have you going as Maleficent or Lara Croft.”

Before the ingrate could respond, Ange was off. She opted to do something she never did: ride her motorcycle, which she kept carefully hidden in a secret pocket of her multi-car garage. It was just that kind of day. One where she wanted to take to the open road and think by not thinking at all. It was often through mental blankness that a mental breakthrough could appear. Maybe one that would tell her what to do in order to cope with how much she had lost touch with her identity. With the girl who had once painted the walls with her own blood and was certain that funeral directing was her best bet.

After about an hour of barreling down the Pacific Coast Highway, she stopped when she came across a funeral parlor near Pacific Palisades. It was then that her mental breakthrough emerged: she would go in and ask for a job. Any job. Something that would allow her to apprentice and work her way up the ladder to become what she had always truly wanted to.

When she walked in, the attendant at the front did a double take and cautiously inquired, “May I help you?”

“Yes, can I speak to the funeral director here?”

The black-haired man, somewhere in his late thirties, assured, “Certainly, I’ll go get him.”

Nobody said no to Ange, and she reckoned that the man told his boss precisely who was out front waiting for him, hence his accelerated pace in materializing. In typical fashion, the funeral director was a fat, balding man with giant sausage-like fingers made more pronounced by the number of silver and gold rings that were tightly clinging to them. Ange reckoned he probably stole said jewelry off the bodies, but who was she to judge?

“Hello… what can I do for you?” he said bumblingly.

The funeral director blinked. “Oh… is this… research? For a role?”

Ange suddenly apprehended that taking such an approach was the best angle for her to get what she wanted. She could pretend to be doing “research” for a role for at least a year before he started to suspect she was lying. And by that point, she would have become so adept at the profession that he could hardly feel obliged to “fire” her.

The funeral director beamed, apparently calculating all the free publicity his funeral parlor would get once he himself leaked the news of her presence to the media. “Well—we at Mount Casket are always happy to help out ‘the industry’ when we can.” Here Ange got the sense that what was meant by “help” referred to something like the scene in Kill Bill Vol. 1 where the hospital worker let creeps fuck patients in a coma. God knows Hollywood was filled with necrophiliacs. Her train of reasoning was stopped by the funeral director adding, “I think we can accommodate you.”

Months later, Ange had all but forgotten about that sniveling funeral director, for she had decided to buy the parlor out from under his nose. It only took her a few weeks of getting her hands on some corpses to know that this was her true calling. Acting had always been a passing fancy, and often one she did grudgingly—ergo such a shoddy filmography. She had also replaced the person at the front desk with a transgender woman named Loca and renamed the business to Angelina’s Funeral Parlor.

It didn’t take long for the press to catch wind and come a-knockin’ for an interview, but they eventually lost interest when Britney’s freedom was gained and she started to tool around town without any underwear on again. One thing Ange did love about Hollywood: there was always another “scandal” to outweigh any of her own.

She became so enmeshed in her work that she was hardly ever home, the parlor her sanctuary—a portal back to herself. As for her “child neglect,” well, money had a way of shutting them up whenever they claimed she wasn’t around enough. God, it wasn’t as though she was as absentee as her own father. They didn’t know from abandonment. This she told herself as she dipped into a fresh batch of formaldehyde.