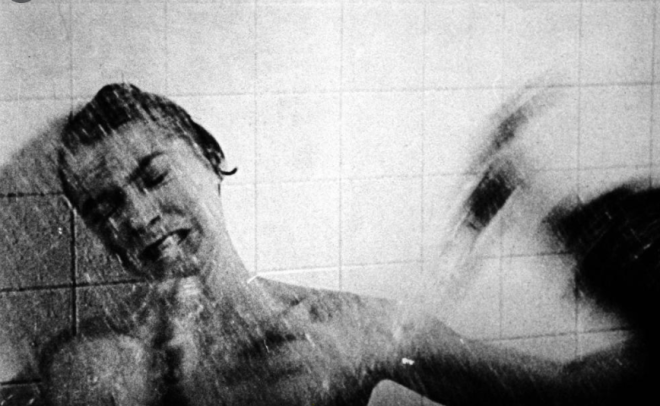 Of course, like any sweet fool, she had trusted the man she thought she loved. The man she thought loved her. And yet, in a sweeping smash cut of all the times she had asked him from the bathroom after getting out of the shower if he had used her towel (for it was a great paranoia of hers that he would rub his hairy, so often dirty body up against it) and heard him assure her, no of course not, she then flashed to what he had really done. For his confession came out unintentionally that morning after two years of living together. She had caught him in the act.

He was not merely wiping his face or some other such “non-offensive” part of the body–more specifically, the male body–but the appendage inextricably linked to “manhood.” The bathroom door had been left ajar… perhaps he had opened it to let some of the steam and stink out. She knew not why. Maybe some part of him even got off on the potential of being caught in the lie, yet Serena also knew that Jacques felt endlessly comfortable in the morning with doing whatever he wanted, aware that she was an extremely deep sleeper and rarely got up before noon due to her line of work (burlesque dancer, bien sûr).

But he didn’t account for her coke binge the previous evening, now did he? Assumed that she would be unconscious as usual, and uphold his presumption that she was a “good” girl at heart, just doing this for the cash until he could figure out something else. For he had been unemployed for the past five months, swearing each day that he was going out and very literally pounding the pavement to look for work, though she reckoned he probably went to one place a day, then grabbed a bottle of wine and sat in the park with it until he had been out of the apartment long enough–not usually returning until she was just about to leave. He likely didn’t want her to scrutinize him too closely for signs of drunkenness. But she knew he was drunk. How else could he explain such a jovial attitude after yet another day spent being demeaned and rejected by The Man?

The Man who also showed up to unleash his not so latent desires at the club where Serena worked under the stage name Whoretense. She thought it was better to hit them over the head with the word they already saw her as rather than tiptoe around it with something “cutesier.” Give the people what they want, right? Isn’t that what the rule of all customer service was? Even though the more accurate saying was, “Give the men what they want.” And what they wanted was to see “Whoretense” shake her ass for them, dance the night away in uncomfortable, barely-there garb like a jewel-encrusted thong as she worked the pole and did her interpretation of burlesque… though she often wondered if the manager had hired her because of her talent or her physique. She knew that it was always the latter that counted the most. At least when you had the misfortune of being born into a feminine form.

The customer she was dealing with that night made his intense interest in her very well-known from the start. Ogling her as he strutted in like he owned the joint, Serena knew she wasn’t going to be able to turn down the offer he was inevitably going to make. Rent was due in five days, and they didn’t have enough as it was without also needing to worry about food. Such an annoying nuisance in the pyramid of human needs, if you asked Serena. And when Raoul–that was his name–offered her a bump of coke, she really only took it because she could feel a pang of hunger in her stomach. She wanted to curb it, and, one supposes, boost her metabolism in the process. Can’t have flab when you’re nude for a living, can you?

Hours later, at around five o’ clock in the morning, she was skulking through the halls of his hotel in Montmartre, trying to flee as fast as she could before the first round of Parisians woke up to bear witness to her walk of shame. Who had she become in the wake of trying to support Jacques? When they had first met, she had ambitions of applying to the Sorbonne, pursuing something noble like Sustainable Territorial Development. Such dreams fell by the wayside soon enough, replaced by those of being able to remain afloat.

Clacking her stiletto heels on the cobblestones (which added at least an extra half hour to her journey in trying to avoid tripping), Serena lit a cigarette and thought of going back to the U.S., from whence she came. Maybe it would be easier. Maybe there was a reason trying to live in a foreign country was so hard: people weren’t meant to stray too far from their roots, lest they encounter too many psychologically damaging circumstances. Just look at what happened when Africans were uprooted for the “sake of” slavery. And though she knew many would never agree with such a sentiment–that migration was not key to human progress–Serena still briefly thanked the gods that she was allowed to have these types of “controversial” musings internally, for the climate had been changing to make any minor notion instantly prosecutable by the Thought Police. She then turned her stream of consciousness to Jacques, a man who was a boy. She once believed she had loved him, but wondered if it was only because he was slightly more fit back then. And gave more of a shit about tending to her in bed. Since their two years of living together, however, things had taken a noticeable downturn. Yet she never imagined just how low he could sink.

When she arrived home around six a.m., he was, of course, still sleeping. She seized the opportunity to take a long, hot shower before he could smell anything on her. Though she knew he was always willing to turn a blind eye to whatever might have happened in the club if it meant she was getting more money out of it. She let the low water pressure beat down on her as best as it could as a means to cleanse her antics of the past night that had now dissipated into dawn. In a brief flash, she saw in her mind’s eye the image of Norman Bates stabbing at Marion Crane like she was a steak that might get up off the counter and run away. She couldn’t really say why that scene had come to her… it had been years since she had watched Psycho, though she supposed no one ever forgot Marion’s murder once they saw it–which is why she didn’t understand how the tag line wasn’t, “You’ll never shower again.”

Shrugging off her reflections on Hitchcock, she reached for her off-white, textured towel, which she had splurged on by purchasing it from Zara Home, rubbing it all over herself before she noticed a strange brownish-green film peppered across parts of it. She was horrified, yet knew that if she confronted Jacques to ask him point blank if he had used her bath linen, never bothering to discern his own from hers, he would simply balk, deny it. So she crawled into bed quietly, barely making a sound or movement that might stir him. She was going to lie in wait to catch him in the act, riding on a continued high of alertness from Raoul’s potent cocaine.

When the moment finally arrived for Jacques’ alarm to go off, she continued to pretend to sleep until he went into the bathroom. As he took his morning shit and shower, she quietly brewed herself some coffee, praying that her proof would materialize. It seemed God, or whoever, for once, was on her side as the invisible hand that guides us all prompted Jacques to open the door and showcase, in all of his lying glory, that he was using her towel. She couldn’t say if it was because she finally had corroboration and there was no longer a placebo effect to make her feel safe or if Jacques had genuinely dirtied her towel too far that week, but whatever the reason, by the time they had finished their flare-up, her own skin flare-up was occurring.

“Molluscum contagiosum,” the doctor told her regarding the red bumps that had cropped up all over her body. “From the towel, yes.” Well, that settled it: not only was Jacques a lying fuckwad and always accusing her of being over reactive to a need for hygienic practices (like not sharing a goddamn towel), but he also fucked her out of her job. There was no way she could take the stage like this. Not even the kinkiest of freaks had a fetish for a pock-marked girl. When she was informed that the bumps might take as long as a year to fully go away, that’s when she knew it was time to abandon Jacques, and Paris. She was done fighting for nothing. It was easy to get paid as a dancer, sure. It was off the books. But trying to seek something more legitimate with her tenuous citizenship would be a nightmare. She would rather surrender to some fluorescent-lit office than keep enduring here.

In the end, she, in more than a cruel twist of irony, ended up getting a job in housekeeping at the Crowne Plaza Hotel near LAX. There, she consistently stood apart from the others in her overzealous replacement of linens, never wanting anyone else to know what she had known. Her attentiveness, unfortunately, cost her her job when she walked in (after hearing no reply to her loud knock) on the CEO of the hotel himself having a flight attendant orgy. If it was just another woman who wasn’t his wife, Serena might have been none the wiser. But since the situation was so compromising, she was summarily sacked.

“That’s what one gets for giving a damn about being sanitary, isn’t it?” she asked no one in particular as she sat it her own urine at the corner of Santa Monica Boulevard and 2nd Street.